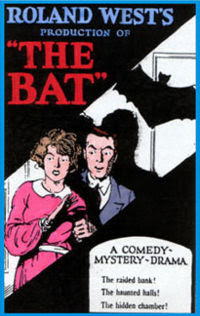 While less remembered nowadays than Agatha Christie, American writer Mary Roberts Rinehart was as influential in the genre of crime fiction as her British colleague, as she originated many of the core elements of murder mystery stories in her writing (the phrase "The butler did it", comes from her work). In 1917 she joined popular playwright Avery Hopwood in order to write "The Bat", a stage adaptation of her novel, "The Circular Staircase", but instead of making a straight version of the novel, they added new twists and turns to the plot, including the presence of a masked criminal named "The Bat", who would make the mystery a bit more complex for Reinhart's popular character, Miss Cornelia Van Gorder. The play was a huge hit, and it fascinated director Roland West, an avid fan of mystery plays who six years later would adapt it to film.

In the film, Miss Cornelia Van Gorder (Emily Fitzroy) and her niece Dale (Jewel Carmen) rent an old mansion that belongs to the wealthy owner of a bank. However, their tranquility is disturbed when they discover that the bank has been robbed by the master thief known as The Bat (due to his elaborate costume), the owner is now dead, and he left the rest of his fortune in cash hidden in the mansion they are renting. Now Van Gorder and her niece will be the new victims of The Bat, who wants to get the full loot and will do whatever it's necessary to get them out of the house, alive or dead. To make things worse, Dale's fiancée Brooks (Jack Pickford), a clerk at the robbed bank, is the main suspect, so he arrives to the mansion hoping to hide for a while. Fortunately, Detective Anderson (Eddie Gribbon) also arrives to help the women, but the Bat has proved to be an extraordinary foe.

Adapted by director Roland West with the aid of Julien Josephson, "The Bat" follows the play in a relatively faithful way, although since West has no way to represent the play's dialogs on film, he decides to put more emphasis on the horror elements and tell the story in a more visually rich fashion. This is specially notorious in the "first act", where West gives more insight about the Bat's methods by showing him using his skills to commit a robbery early on the film. Still, the movie version keeps those touches that made the source so different to other mystery plays, specially that touch of dark detective fiction that predates the films noir of the following the decades. As usual in this kind of plays, there's also a touch of light comedy (in the shape of the classic cowardly character) that serves to break the suspense and add some fun every now and then.

As an early adaptation of a murder mystery play (like West's other horror film, "The Monster"), "The Bat" is a very influential movie in the horror genre because of its use of the old dark house setting, however, visually it is a very memorable film too. The most striking features of "The Bat" are without a doubt William Cameron Menzies's work as set designer and the cinematography by Arthur Edeson (assisted by a young Gregg Toland, in his first real job), which under West's direction result in a wonderful expressionist nightmare. To create his atmospheric game of light and shadows, West decided to shot the film mostly at night, which is why "The Bat" has that dark stylish look that feels surreal and otherworldly. Interestingly, West's directing of actors is very restrained, as if he intended to tell the story with the cinematography instead of his cast.

While in the novel the character of Miss Cornelia Van Gorder played a more prominent role, here it's Dale and her fiancée Brooks whom are in the spotlight. As Brooks, Jack Pickford (Mary Pickford's scandalous brother) is effective, although nothing really amazing; the same could be said of Jewel Carmen (West's wife at the time), who plays Dale. They aren't bad, but not exactly noteworthy. Quite the contrary is Louise Fazenda, who steals the show as the cowardly maid Lizzie and adds a lot of charm to the film thanks to her over-the-top slapstick comedy. As the witty Miss Cornelia Van Gorder, Emily Fitzroy is pretty good, and certainly embodies the character with a strong presence. Finally, Eddie Gribbon is another of the cast members who give a great performance, possibly the best in the film after Fazenda's.

Despite it's many memorable moments, in the end "The Bat" as a film is damaged badly by its own origin as a play: on stage actors have words, but West can't have that element on film. While West certainly did his best to tell the story without words (and the first act is itself a masterpiece of silent storytelling), the film does feel very stagy, specially in the scenes directly lifted from the play, which result in a film of irregular pace, with some highly dynamic scenes and others that are slow and kind of dull. In my personal opinion, "The Bat" would had been better if West had done a less faithful adaptation, and instead had followed the path he was walking in the first act, which was highly original. For example, Paul Leni's adaptation of "The Cat and the Canary" (another murder mystery play) done the following year takes what West started here to higher levels.

In the end "The Bat" is a highly enjoyable film that, while not really a masterpiece, it is of great interest due to its beautiful cinematography, set design and ultimately charming plot. West would remake this film 4 years later as "The Bat Whispers", now with sound and what he lacked here. And yes, it would be that 1930 horror film the one that would inspire comic book artist Bob Kane to create his very own Batman. A flawed but still good horror movie.