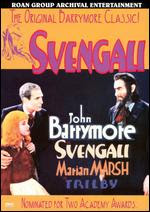 In the early 1930s, the horror genre entered into the era of sound films thanks to producer Carl Laemmle Jr. of Universal Studios, who after the success of "The Cat Creeps" in 1930, and specially "Dracula" and "Frankenstein" in 1931, inaugurated a Golden Age of American horror that produced a lot of classic movies. But while Universal was the major producer of horror movies and literally ruled the genre through the decade, it wasn't the only studio that was producing masterpieces in those years. Warner Bros. Pictures, a studio famous for their musicals, began their history within the genre only three months after Universal's "Dracula" was released, with a movie based on the popular novel by George Du Maurier, "Trilby", in which the legendary actor John Barrymore would enter for a second time in horror history by playing one of the most popular characters in Gothic literature: "Svengali".

Set in France during the 1850s, the movie is the story of Svengali (John Barrymore), a music maestro who often uses his great skill at hypnotism to get what he wants from his pupils. One day he visits a group of artists he knows, hoping to get some money from them, but instead he meets Trilby O'Farrell (Marian Marsh), a beautiful model who has come from England to work with the artists. Svengali falls in love with her, but she prefers one of the artists, Billee (Bramwell Fletcher) instead. Despite this, Svengali doesn't lose hope, and one day when he uses his hypnotic powers to cure her headache, he discovers that while tone deaf, Trillby has actually good vocal chords. With this in mind, Svengali decides to use his power to its full extent and via hypnotism transforms Trillby in "La Svengali", a singer of unparalleled skill completely devoted to him. But Billee won't let him run away with his love.

One of the last works by the experienced writer J. Grubb Alexander, this adaptation of "Trilby" remains close to Du Maurier's novel, but with an important change: the plot is focused completely on Svengali, and the story is shown from his perspective. This is even more interesting because unlike the rest of the villains of the era, Svengali isn't an archetype of pure evil, he is instead a really complex character that can be funny, evil and tragic as well, as he is essentially a human being with a great skill that he chooses to use in his favor. This complexity plays a big role in the film, as one of the central themes is Svengali questioning the morality of his acts and wondering if they are worthy. And despite this, writer Alexander manages to keep an equilibrium between the Gothic horror and the melodrama and the comedy of the script.

Director Archie Mayo was one of the filmmakers who managed to make the jump from silent to "talkies" in the early 30s, and in "Svengali" one can see his experience in the silent era, as it is a very visual film. The most striking feature of the movie is its notoriously expressionist look, that goes beyond what Tod Browning had done in "Dracula" and truly feels like a German silent film at times due to its amazing use of sets and miniatures (including an awe inspiring shot over Paris' rooftops that's still impressive even now). Barney McGill's cinematography is put to great use through the film, and gives the movie a unique, almost surreal look that fits perfectly the themes of hypnotism that the movie handles. Mayo makes his movie to be highly atmospheric, and one can truly feel the tragic sense of impending doom that the characters have.

The legendary John Barrymore returns to the horror genre more than 10 years after his excellent performance in 1920's "Dr. Jekyll and Mr. Hyde", and while lesser known than that famous role, his work as Svengali is simply masterful. As written above, the character is very well developed, and allow Barrymore to show his talent, and while he overacts at times, it strangely doesn't feel out of place in his role as Svengali is after all, an eccentric bohemian artist. Marian Marsh plays Trillby, and while very young at the time (only 17), she makes an excellent counterpart to Barrymore and is a highlight of the film, playing very convincingly the role of the energetic young model that becomes La Svengali under her master's spell. Bramwell Fletcher plays Billee, and while effective, his performance as the story's hero is nothing really amazing.

Some have criticized "Svengali" for its use of comedy, mainly as Svengali is presented as clumsy at times, but in my opinion, that's a strength of the movie, as it offers an atypical villain in the sense that he is very human. Unlike more archetypal villains, it's easier to relate to Svengali, and feel identified with his story of unrequited love, and that's probably what's more disturbing about him: he just had the power to do his will and used it. It's hard to find a real flaw in "Svengali" (although I'm sure some may dislike Barrymore's overacting at times), and probably its main problem is that while it has everything to be a classic, it simply gets easily overshadowed by the more influential (and superior in number) output of Universal Studios. However, I personally find it to be easily on the level of anything done by Universal.

Seldom seen by the audiences nowadays, "Svengali" is one of those movies that even now can be impressive. In this movie, director Archie Mayo and John Barrymore give justice to Du Maurier's legendary character and bring him to life in extraordinary fashion. With its excellent performances and the beautiful art design, "Svengali" is definitely a forgotten masterpiece if there ever was one.