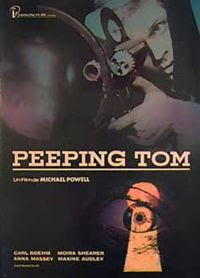 Without a doubt, 1960 was a year of numerous and important changes in the history of cinema, specially in the horror genre, as with the beginning of the end of the Production Code, new and different ideas began to be explored within the genre's conventions. One of those was the introduction of complex psychological themes and sexual overtones, inaugurating what is now known as "psychological horror" with movies like 1959's "Horrors of the Black Museum" and Hitchcock's 1960 masterpiece, "Psycho", which gave a human face to the monsters of horror movies (as previously most were of supernatural origin). Another of those significant movies that helped to change the genre in the 60s is without a doubt Michael Powell's "Peeping Tom", a morbid tale of horror and suspense about voyeurism that follows that very same path of psychological horror and, like "Psycho" (released three months after "Peeping Tom"), elevates it to an art-form.

"Peeping Tom" is the story of Mark Lewis (Karlheinz Böhm), a young focus puller in a British film studio who aspires to become a filmmaker himself. A shy and lonely man, Lewis is not very social, and prefers to spend his time with his camera, working as a photographer of pornographic pictures of women. However, this young man has another secret, and that is that he is actually a serial killer who films and murders young women, the same that the police has been looking out for weeks. Things get complicated when he meets Helen Stephens (Anna Massey), a young woman who lives downstairs with her mother (Maxine Audley) in a room they rent to Mark. Soon, her friendship begins to mean a lot to Mark, as she offers him an honest understanding he had never had before. However, the shadow of Mark's traumas and obsessions is always present, and he'll have a hard time facing his demons.

Written by former cryptographer Leo Marks (albeit Powell had a hand in the script as well), "Peeping Tom" is a deep and disturbing journey through the darkest sides of the mind as it's entirely focused on Mark as the main character. Unlike Hitchcock's "Psycho" (a movie often compared to "Peeping Tom"), the serial killer is not seen through the eyes of those around him, in this film we are living the story entirely from his perspective, discovering the person behind the psychopath personality as well as the reasons behind such a disturbed mind. In a way, it's a deeper humanization of the serial killer character, although interestingly, it doesn't attempt to glorify him or justify him (like posterior movies of the same type did), as the movie centers on his attempt to stop doing what he knows is wrong and his desire to have a normal life.

Using a strikingly beautiful color cinematography (by Otto Heller) and a remarkably skillful use of the first person viewpoint, director Michael Powell conceives "Peeping Tom" as a bizarre chant to the voyeur we all have inside, and the pleasure we get from watching others. It's not for nothing that our central character is a filmmaker himself, as the concept of filming a person becomes one with the concept of killing one, as like some have done before (Buñuel for example), the camera is taken as an aggressive, almost physically violent entity that invades and steals the life essence of the person filmed. However, it's not only Powell's use of cinematography what shines in "Peeping Tom", his overall use of suspense in the creation of his scenes plays a major role in this highly atmospheric movie where one can almost feel the tension that fills Mark's mind at every step.

And this takes us to the cast, which under Powell's direction deliver for the most part excellent performances. Karlheinz Böhm is truly the highlight of the film, as his acting as Mark is instrumental for the success of the movie. Making a very real and believable character, Böhm transmits perfectly how insecure and vulnerable his character is deep inside, giving definitely one of the best performances in a horror movie ever done. As Helen, the young girl who befriends Mark, Anna Massey is simply perfect, as she perfectly portrays the naiveté of the character, as well as the innocence that leaves a profound effect on Mark's psyche. As Helen's mother, Maxine Audley is effective and has a couple of excellent scenes, although it must be said that the film ultimately belongs to Böhm and Massey, as its their relationship what becomes the central focus of the story.

As one can imagine, this movie is not the typical horror movie, it's complex and dark, but also disturbingly very human; definitely not what people expected from director Michael Powell, whom along Emeric Pressburger made some of the most cherished British film of the 50s. This darkness of the subject that "Peeping Tom" handled was too much for the audiences used to Powell's previous work, and therefore the movie failed commercially and sent Powell's career to oblivion. However, it must be said that none of the problems "Peeping Tom" had during its release are due to poor film-making, quite the contrary, as this movie ranks easily amongst the most influential horror films ever done, and its commercial failure can only be blamed to the fact that it was ahead of its time. Despite the harsh bashing it received, Powell considered this movie his masterpiece, and I can only agree with him.

One of the most interesting (and disturbing) movies about serial killers, "Peeping Tom" is easily one of the best too. The comparisons with "Psycho" are fair, albeit this is certainly a different kind of beast, as it's like a deeper, harsher version of the same subject but with less psychology and a lot more of heart. And it's probably this enormous humanity what makes the film so ultimately disturbing. A really influential classic of horror that should be better known in the future as the masterpiece that it is.

I admit it, it's a controversial film even today and not for everyone, but I think it's great. Even Hitchcock would be proud of it. Having Karlheinz Bohm play the main role actually turned out to be a great choice.