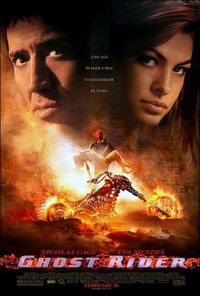 Ever since the release of Bryan Singer's "X-Men", movie based on Marvel Comics' popular superhero team, the first decade of the 2000s saw a revival of films based on the adventures of comic book heroes even bigger to what Donner's "Superman" did in the late 70s, and Burton's "Batman" in the late 80s. After "X-Men" came "Spider-Man", "The Hulk" and many other classic names of the main comic book pantheons (even the Batman franchise got a reboot) as modern technology made possible what in the past years was impossible: to represent the fantastic abilities of the characters in a somewhat realistic way. After more than 6 six years of troubled development (it was one of the first to be announced), the supernatural hero created in the 70s by Gary Friedrich and Mike Ploog, "Ghost Rider", has now joined the ranks of superheroes with a movie adaptation.

The movie is the story of Johnny Blaze (Matt Long), the son of a stunt motorcycle rider (Brett Cullen) who one day discovers that his father is dying of cancer. On that day the demon Mephistopheles (Peter Fonda) appears to him, and offers Johnny the chance to save his father if he is willing to give him his soul. Blaze sings the contract and his father gets cured, but later gets killed on a motorcycle accident, making Johnny's soul the Devil's property, and he'll find a use for him someday. Many years later, Johnny (Nicolas Cage) is now a famous stunt driver, and is in this way where he gets reunited to the girlfriend he abandoned as a teenager, Roxanne (Eva Mendes). However, the Devil also returns to Johnny's life and forces him to become his warrior, the Ghost Rider, as he needs him to kill his son Blackheart (Wes Bentley), who plans to overpower him.

Written and directed by Mark Steven Johnson (who previously worked on "Daredevil"), "Ghost Rider" is essentially, a movie to spent the time and have some fun. This is not a movie that explores the complexities of its hero, but one that seems to celebrate the fun and entertainment that comic book superheroes represent. Unlike what one would expect of a title like "Ghost Rider" (and its themes of demons and ghosts), Johnson makes a story that owes more to adventure comic books and the Western serials of old than to the Faust myth, as he adds a good dose of tongue-in-cheek humor that lightens up things a lot. Johnson truly captures the feeling of a comic book in his story, but sadly it also carries the problems that this kind of stories have, like for example a very shallow characterization, several underdeveloped subplots, and a predictable and clichéd plot.

Now, while Johnson's work as a writer is average at best, he fares a tad better as a director, as he manages to bring to life his comic book adventure with all the wry humor and action he put on paper. As written above, Johnson's movie owes a lot to Western serials and pulp fiction, and this carries out to the visual style too, as even it makes a big nod to the Phantom Rider, the classic Western character that originated "Ghost Rider". Since the main character is literally a living skull on fire, the special effects had to be excellent, and fortunately, they are the best part of the film, as their creation of the rider and his fire is simply outstanding. Sadly, a movie can't be completely about special effects, and to his great misfortune, Johnson's skill as a director of real life actors are considerably inferior to his skill at making great visuals.

Nicolas Cage is surprisingly effective as Johnny Blaze (an improvement over his disastrous performance in the remake of "The Wicker Man"), and against all odds makes a convincing tortured antihero with a very black humor. Peter Fonda and Donal Logue are also pretty good in their small roles, although the real highlight of the film is Sam Elliott, who plays the mysterious Caretaker of the local cemetery. They all make great jobs in their arguably underwritten characters, but sadly, the film is also plagued by awful performances, starting with the one given by Eva Mendes, whom at best feels severely out of place, and at worst looks like an amateur trying to act. Definitely not her best moment. The other cast member who brings the movie down is sadly Wes Bentley, who not only isn't remotely memorable as the main villain, but also overacts to the point of ridicule.

While certainly the bad performance of some cast members hurt the film a lot, it must be said that there really wasn't a lot for them to work with, because as written above, the writing isn't exactly the best material and no matter how good one actor is, the quality of the script will play a major role in the final output. This is specially obvious in the way Johnson fleshed out his villains, as if some characters are insipid, the villains here are dull, uninspired and serve no other purpose that to let the hero show off how amazing he is. A good villain has a definite personality and in "Ghost Rider" they only exist to look good, and that's a real damage to the movie, as there's never a real sense of danger with such weak counterparts for the hero. The complete opposite are Fonda and Elliott's characters, whom are easily the best thing about the film.

Despite all its flaws, I enjoyed "Ghost Rider" for what it was: an action movie with a touch of the Western genre meant to translate the fun and entertainment of comic book adventures to film. I probably liked it more that I should have, but that's mainly because while it certainly lacks a lot of quality, it had a lot of heart, and sometimes that's all that matters. Not a particularly good movie, but it is a good ride.