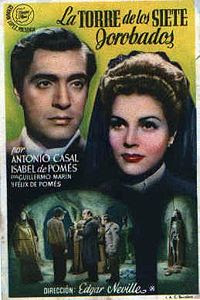 Despite being the birthplace of the brilliant pioneer of fantasy films, Segundo De Chomón (whose films rivaled Georges Méliès in quality and inventive), Spain's filmography within the realm of the horror genre is considerably poor before the 60s, when Jesus (or Jess) Franco inaugurated Spaniard horror. This was the result of the difficult political climate of the country during the regime of dictator Francisco Franco. In fact, while there were a couple of fantasy films done before 1962, the only true horror film was a little known movie titled "La Torre De Los Siete Jorobados", directed by Edgar Neville, and based on a popular pulp novel written by Emilio Carrere. However, despite being the only example of Spaniard horror film-making in the 40s, this film is more than a mere curiosity, it is actually a forgotten gem of the genre.

Set in 19th century Madrid, a young man named Basilio (Antonio Casal) decides to play roulette, hoping to make some money to go on a date with the girl he likes. Suddenly, a mysterious character appears (Félix De Pomés) out of nowhere, and tells Basilio exactly where the ball is going to fall. Winning a small fortune thanks to the stranger, Basilio decides to thank him for the help, only to discover that the mysterious man, named Don Robinson De Mantua, is the ghost of an archaeologist who supposedly committed suicided years ago. In return for the help at the roulette, Don Robinson asks Basilio to protect his daughter Inés (Isabel De Pomés) and help her solve his crime, as Don Robinson was actually murdered. And so Basilio gets involved in a mystery that will take him to discover the entrance to the Tower of the Seven Hunchbacks.

As written above, "La Torre De Los Siete Jorobados" is based on Emilio Carrere's novel of the same name (which was partially written by Jesús De Aragón), however, there are many differences between the novel and the film, specially in the tone that scriptwriters Edgar Neville and José Santugini give to the story. While the novel has a somber dark humor, Neville's film opts for a lighthearted style, more in tone with American horror and adventure movies (that definitely were a big influence on Neville) than with its literary source. This is not really a bad thing, as the movie keeps the thrilling mix of mystery, humor and suspense of the novel, and I'd go as far as to say that Neville's decision of making a fun movie over a meaningful one actually benefits the film, as while certainly an imitation of Hollywood's typical style, it's anything but conventional.

Where the movie excels is in its execution, as Neville gives good use to the excellent work of cinematography done by Henri Barreyre and Andrés Pérez Cubero, giving the film a haunting beauty. The most striking feature of the film is definitely its wonderful set design, with the recreation of the Tower of the Seven Hunchbacks having a beautiful expressionist look that feels like taken out from a 1920s German film. The contrast between the surreal expressionism of the Tower with the Gothic atmosphere of Madrid's streets (in scenes shot on location) give the movie an effective nightmarish look, which definitely bring back memories from the American horror films from the 30s (specially the ones by Universal Studios). However, what makes this mix of influences work is Neville's own brand of humor, which gives the film a distinctive personality of its own.

The cast is for the most part effective, with Antonio Casal leading the cast and making a good job at handling the comedic side of his character (his Braulio is goodhearted, but cowardly and specially naive). As his romantic interest, Inés, actress Isabel De Pomés is good, although nothing really special. Still, this could be blamed to the fact that her character isn't very well developed and it's a stereotypical damsel in distress. On the other hand, Guillermo Marín is extraordinary as the mysterious Doctor Sabatino, delivering a powerful performance that definitely ranks among the best in Spain's horror filmography. Marín captures perfectly the mix of charming amiability and perverse wickedness that makes Sabatino such an interesting character and he is easily the best in the cast. Finally, Félix De Pomés is quite funny as Don Robinson's ghost, despite his limited screen time.

Now, while "La Torre De Los Siete Jorobados" is certainly an excellent and entertaining film, it sadly is far from being perfect, mainly because in his attempt for imitating the commercially successful American films, director Neville also brings those films' flaws, specifically, their reliance on clichés. While the movie has a wonderfully expressionist look and the story is certainly inventive, the plot unfolds in a very conventional way, and while entertaining, it isn't exactly the masterpiece that could had been or that its very artistic look may indicate. This dependence on common clichés and some cheap jokes do make a bit simplistic and predictable what otherwise could had been a quite haunting tale of horror. Fortunately, the damage is not really big, and "La Torre De Los Siete Jorobados" can still be enjoyed without problem.

Of course, this last criticism is probably just nitpicking, as in the end, "La Torre De Los Siete Jorobados" fulfills its purpose without great difficulty: it provides good entertaining as Basilio uncovers the thrilling horrors of the Tower of the Seven Hunchbacks. While it would take several years after this film's release for horror to resurrect completely, "La Torre De Los Siete Jorobados" did open the doors for the fantastic in Spain's filmography. For this and several other reasons (like its expressionist look, which must be seen to be believed), this little known gem is more than a mere curiosity, it is truly Spain's first horror classic.