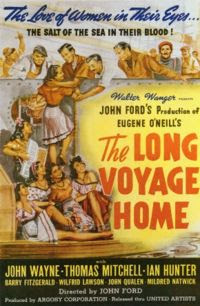 Without a doubt, director John Ford is one of the most highly regarded American filmmakers of all-time, as not only he directed several acclaimed movies through his career, his work is often cited as a big influence by celebrated directors such as Orson Welles. While definitely better remembered for his revolutionary work in the Western genre, Ford tackled many different themes and subjects through the 49 years of his career, and "The Long Voyage Home", based on Eugene O'Neill's "Glencairn Plays", is a big proof of this. Produced during one of the highest creative peaks in Ford's career (1939-1940), "The Long Voyage Home" is a drama film about the crew of a freighter; and while it's probably an atypical Ford film at first sight, it's probably one of his best and most personal, and it even has one of the best and most unusual performances by Ford's most famous friend: John Wayne.

"The Long Voyage Home" tells the story of the crew aboard the SS Glencairn, an English ship during World War II. The crew includes very different and contrasting people, such as the witty Irishman Drisoll (Thomas Mitchell), the young and optimistic Swedish farmer Ole (John Wayne), the melancholic philosopher Donkeyman (Arthur Shields) and the brooding Englishman Smitty (Ian Hunter); with the ship being what brings them together and the place where they face their own demons. However, their trip from Baltimore to London will bring another problem to their lives: the Glencairn has picked up dynamite in Baltimore, and will try to transport it to England sailing through the Atlantic ocean, where the German army lurks and hunts for this kind of shipments. This difficult situation will be the catalyst that will uncover secrets, put them to test, and make some personalities clash.

As written above, the movie is an adaptation of Eugene O'Neill's "Glencairn Plays", four one-act plays about the Glencairn's crew, although scriptwriter Dudley Nichols moves the action from World War I to World War II. Nichols shows a lot of care in his work of blending the four plays into one single storyline, as well as a great understanding of cinema as a different medium from theater. Not only he manages to update O'Neill's work to the years of the WWII, he does it without compromising the often bleak and pessimistic themes of the plays; and more importantly, it's all so wonderfully structured that while episodic, the story flows seamlessly and with a very good rhythm, making hard to believe that it's made of 4 stage plays. Nichols makes sure to develop every character in a very realistic way, making them just like O'Neill intended them to be: portraits of real sailors and their life.

Like he previously did in "Stagecoach" and "The Grapes of Wrath", director John Ford once again creates a movie around a group of characters, although unlike those other film, in "The Long Voyage Home" there is not a "main character" to tie the rest of the group, here everyone is of relatively equal importance and if there's anything that brings them together, that would be their voyage home itself. And Ford makes said voyage to have a life of its own thanks to the eye of the legendary cinematographer Gregg Toland, who in this movie gives one of his best works, capturing with his camera haunting images that posses both a harsh realism and a supernatural beauty. A lot of the power of Toland's images comes from how atmospheric they are, as Ford used them brilliantly to portray the feelings of isolation and loneliness in which the sailors live during their trip.

A lot has been said about how the combined talents of Nichols, Ford and Toland created this great movie, but honestly, it wouldn't be the same without the excellent performances delivered by the cast. As Driscoll, arguably the leader of the gang, actor Thomas Mitchell is simply excellent in his portrayal of the charming Irishman. However, as great as his performance is, he is eclipsed by Ian Hunter's portrayal of the mysterious Smith, a sailor haunted by the inner demons from his past, in which is probably the best work of acting done in the movie. As the only optimist in the group, John Wayne is very effective, in a role that proves that there was more in the Duke than the cowboy he often portrayed in films. Familiar faces from other Ford movies such as Barry Fitzgeral and John Qualen also deliver excellent performances as the movie's only source of comic relief.

It's very probable that "The Long Voyage Home"'s worst enemy is the fame of John Ford and John Wayne, as considering the style of most of their other collaborations (Wayne appeared in 24 of Ford's films) and the fact that he gets top billing, one could be expecting another of Wayne's roles as a lead actor when here he is in fact, just another member of an excellent ensemble cast. Still, this movie is one of Ford's most enjoyable films, mainly because the humanity of the characters is so realistic, that it's not difficult to feel identified with the sailors and their problems, and I would venture to say that the physical isolation in which they live is somewhat representative to the mental isolation one feels during difficult times. While melancholic and somewhat bittersweet in tone, "The Long Voyage Home" is definitely a very powerful and human motion picture.

"The Long Voyage Home" will probably disappoint those expecting to see Wayne in a World War II action role, but it provides a different fascet of John Ford's cinema that it's as interesting as what he did in his Westerns. In "The Long Voyage Home", Ford creates a haunting portrayal of humanity and its many sides, contrasting optimism, pessimism, idealism and even nihilism in a very beautiful and realistic way. Ford and Wayne will probably be remembered mostly for their Westerns, but it's in films like this one where they show that their talents weren't limited by a genre. Personally, this is my favourite performance by Wayne, as despite being a relatively small role, here he shows he knew how to act.