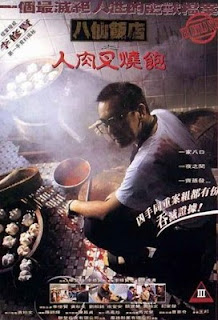 In the early 80s, popular actor Danny Lee (famous for his work in action films) became director and producer of his own films, and by the end of the decade was already a major player in Hong Kong's movie industry. This position allowed him an enormous amount of power during the 90s boom of Hong Kong cinema, and made him the discoverer of future famous stars (like Stephen Chow for example) and producer of a wide array of fresh and interesting films by upcoming filmmakers. Among those, Herman Yau's "Bat sin Fan Dim Ji Yan Yuk Cha Siu Bau" (known in English as "Human Pork Chop" or "The Untold Story"), is certainly one of the most popular in the Western world, and one of the better known movies of the CAT III rating (originally for pornography, but also covered grisly exploitation and horror films) that was introduced by the Hong Kong government during those years. Suppousedly based on a true crime story, "The Untold Story" turns out to be very powerful film that truly lives to its reputation as one of the most brutal films of Hong Kong cinema.

The plot in "The Untold Story" begins with the grizzly discovery of a plastic bag containing decomposing body parts in a lonely Macao beach. The young and unexperienced police team assigned to the case is confused, completely clueless and disoriented, never having faced a case of such a horrible nature; however, lead by the suave officer Lee (Danny Lee), the team begins to find clues pointing to Wong Chi Hang (Anthony Wong), a Hong Kong native, owner of the popular Eight Immortals Restaurant. As the cops discover that Wong had just bought the place to his former boss under strange circumstances, they try to track down the previous owner; nevertheless, every attempt to find him or his family proves to be futile. The discovery of Wong's dark past in Hong Kong prompts his arrest, but at the station, the odd man still refuses to admit having committed the crime. Officer Lee decides to take severe measures to force his confession, but not even the determined detective will be prepared to hear the horrific details of Wong Chi Hang's Untold Story.

Written by Law Kam Fai (author of another famous CAT III film, "Dr. Lamb"), the story unfolds as a typical police procedural movie, detailing the work of the cops trying to figure out the identity of the criminal; however, two extremely different elements set "The Untold Story" apart from similar stories: the dark and hauntingly realistic portrayal of the psycho killer, and the no less dark sub-theme of police brutality. The odd addition of offbeat comedy (in the shape of the team of bumbling cops) disrupts the haunting mood and its an unnecessary addition that tarnishes the film instead of of serving as comic relief. Nevertheless, when it gets serious, "The Untold Story" shines the most, contrasting the sadistic acts of a madman with the equally sadistic interrogation techniques of the police. It may seem gratuitous, as if each act of violence was attempting to top the previous one in brutality; however, violence is more unnerving than exploitative, and all in all serves the purpose of showcasing police authority as clumsily overconfident at best, and stupidly ineffective at worst.

While labeled as one of the most shocking Asian horror films, "The Untold Story" is surprisingly not as graphically gory as one would expect with such title; the shock and the horror originate not from what's seen, but from what takes place in off-screen. Directors Danny Lee and Herman Yau build up a disturbing atmosphere, very much in tone with the unbalance mind of Wong. Employing a stylish narrative, directors Yau and Lee cleverly orchestrate the grotesque details of the crimes in such a harrowing, powerful way that, no matter that the actual act takes place off-screen, the horrific effect is still felt. Having the audience's imagination to fill the gaps is a powerful device directors Yau and Lee use to full effect, ultimately making the violence portrayed frighteningly real despite not being strictly graphic. One doesn't need to see the cut to feel the pain. The raw and gritty style Yau and Lee use for the film (mainly for budgetary reasons) only enhance the realism of the movie, and together with Wong's brilliant performance result a movie very hard to forget.

Definitely one of the elements that really make the difference between "The Untold Story" and similar exploitation movies (Asian or not) is the top notch performance of Anthony Wong as the enigmatic Wong Chi Hang. Menacing and cold, yet frighteningly human, Anthony Wong captures so well the traits of this unbalanced psychotic character that one can't help but believe that the man on screen is truly a demented person. Anthony Wong's fascinating portrayal of the monster behind the glasses is definitely the film's highlight. Action veteran Danny Lee, as Officer Lee, offers a balance between the darkness of Wong and the silliness of the police team. Lee adds a factor of coolness that gives edge to his smooth and witty character, and contrasts with the clumsiness and naiveté of the cops (though certainly, none of them is a model of police ethic). The young cops are portrayed by equally young actors, and their performances range from average to poor. The exception is Emily Kwan, who plays Bo, the only female in the team, being the only one genuinely funny in her comedic turn.

Harrowingly disturbing and remorselessly grizzly, "The Untold Story" is truly a movie difficult to watch; yet, while terrifyingly crude, the sadistic and violent portrait it makes of the crime is strangely captivating in a way that few horror movies manage to achieve. But even when "The Untold Story" is one of the best CAT III movies of its time, it's definitely not without flaws, and one of them really brings down the movie, preventing it from being a masterpiece of its genre: the odd addition of silly comedy, and bad comedy while we are at it. In a fashion remarkably similar to Wes Craven's "The Last House on the Left" (1972), the bumbling cops make for a comic relief that is so silly and stupid, that feels unnecessary and out of place. As in Craven's groundbreaking film, the odd mix doesn't work that well, and tarnishes an otherwise brutal movie (though, it must be said that the effect is less silly than in Craven's film). The film's low production values are also notorious, but sometimes that also adds to the atmosphere, giving the film a fitting raw, unpolished look.

As one could easily imagine by now, it is obvious that "The Untold Story" is not a movie for everyone. The powerful and violent descent to the killer's mind is a harrowing experience not for the squeamish, but it is also a very rewarding movie. Anthony Wong's unforgettable performance, together with the film's dark grizzly tone, its captivating storyline, and its carefully constructed brutal violent imagery make "The Untold Story" the perfect example that exploitation movies can mean more than gratuitous graphic violence. Not that there's something wrong with gratuitous graphic violence, but in "The Untold Story" (like Ruggero Deodato's "Cannibal Holocaust"), it enhances the atmosphere and horror in a powerful way. Shocking, disturbing and unnerving, Herman Yau's "The Untold Story", or "Bat sin Fan Dim Ji Yan Yuk Cha Siu Bau" is in a class of its own.