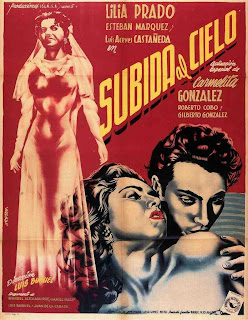 After becoming one of the most promising artists in Europe during the early 1930s, director Luis Buñuel faced exile when the Spanish Civil War began in 1936, truncating a career that seemed limitless up to that point. The years of obscurity were broke when producer Óscar Dancigers helped him to begin a career in the Mexican film industry in 1947. Adapting his talents to the budgets and style of Mexican productions, Buñuel began once again to develop his vision, and the master of surrealism would make one of the most powerful comebacks in the history of cinema: 1950's "Los Olvidados". While the film initially faced strong opposition (which forced him to direct a couple of crowd pleasing potboilers after it), its triumph in Cannes the following year finally earned Buñuel a certain freedom to work. And "freedom" is what best defines the film he made after this success: a surreal film inspired by the weird anecdotes of a trip that his friend, poet Manuel Altolaguirre, made by bus through the Mexican coastal towns. That film would become "Subida al Cielo".

"Subida al Cielo" (literally "Ascension to Heaven", but better known in English by the lousy title of "Mexican Bus Ride") is the story of Oliverio (Esteban Márquez), a young man living in a small coastal town in Mexico. Oliverio just got married to Albina (Carmen González), but he must interrupt the traditional wedding trip because of the illness of his mother Doña Esther (Paz Villegas). Doña Esther knows she is dying, but she also knows that her older sons will try to keep the inheritance for themselves. Esther asks Oliverio to make the trip to the town of Petatlán and bring Mr. Figueroa (Manuel Noriega), her executor, in order to settle her will. And so, a desperate Oliverio decides to leave his mother under the care of Albina, and take the only way to Petatlán: an old, rusty bus driven by the carefree yet eternally optimistic Silvestre (Luis Aceves Castañeda). But on the bus is also Raquel (Lilia Prado), a beautiful and lustful young woman whose only desire is to seduce Oliverio and make him ascent to her heaven.

Taking Altoaguirre's idea merely as the basis, the screenplay was ultimately written by Altoaguirre, Buñuel and Juan de la Cabada; with the collaboration of Lilia Solano, who helped to add realism to the dialogs. The result of this team of artists working with relative freedom is a wild surrealist comedy where Oliverio's difficult trip is filled with a wide variety of funny situations, absurd mishaps and unforgettable characters. Facing inclement weather, the forces of nature, the awfully poor state of the roads, sheer bad luck and last but not least, the constant advances of sexy temptress Raquel; Oliverio's journey becomes some sort of surreal variation of Homer's "The Odyssey", in which everything and everyone seem to be there to make the young man fail on his mission. It may sound like a bunch of odd situations randomly thrown in for laughs (and in full Buñuel fashion, to make fun of as many figures of authority as possible), but "Subida al Cielo" never digress and keeps things flowing nicely with sharp witty humor and great comedic timing.

In "Subida al Cielo", Buñuel returns to a theme he had already explored in "L'Âge d'Or" (and would explore several times later), which is having the success of a goal compromised by absurd characters and situations that prevent the protagonists from achieving it. However, unlike his earlier "L'Âge d'Or", Buñuel makes his story with a truly free spirit but without sacrificing coherence in the narrative, making "Subida al Cielo" one of his most accessible and fun works amongst his properly surrealist oeuvre. The tone is light-hearted for the most part, although the film does have its serious moments. In terms of style, it's particularly curious how despite its decisively comedic tone, "Subida al Cielo" has a certain atmosphere akin to Henri-Georges Clouzot's dark and somber thriller "Le Salaire de la peur" (1953), which is another movie about a difficult ride through the jungle. Buñuel's obsessions are everywhere: class, religion, death and most remarkably, sex. Sex incarnated in the beautiful Lilia Prado, whom in this film has a role in one of Buñuel's most amazing surrealist sequences.

As the lustful Raquel, Lilia Prado oozes sexuality and showcases a freshness and a strong presence that make her unforgettable. Unfortunately, Esteban Márquez fails to be a good counterpart, and in fact, it could even be said that as Oliverio, completely misses the mark as the protagonist. Wooden and barely expressive, Márquez lacks the necessary charm, style and vitality to be the film's hero, and one can't help but wonder what would had happened if Roberto Cobo (who plays one of Oliverio's older brothers) had taken the lead role. The assortment of characters that make the bus' travelers is one of "Subida al Cielo"'s most interesting elements, and the actors playing them truly create unforgettable roles (an achievement, considering the roles are basically archetypes). Specially worthy of recognition are Luis Aceves Castañeda as Silvestre, and Manuel Dondé as Eladio, the political candidate. Dondé is particularly fun in his role as a walking collection of small town politics' worst vices.

Wild, erotic and vibrant with life, "Subida al Cielo" is one of the most enjoyable films by the Spanish filmmaker. However, two major problems plagued Buñuel's shooting of "Subida al Cielo" and unfortunately, they became pretty noticeable in the final product: a major cut to his budget and unexpected changes to his schedule. With less money and less time than what had been planned, Buñuel had to rush the production and work wonders with what he had available. Certainly, it is commendable that despite those problems, "Subida al Cielo" still ended up being true to his own intentions; however, the last third (practically everything after the fabulous surreal sequence) does feel tragically rushed, incomplete or both. Reportedly, major changes to the screenplay had to be done and many scenes had to be omitted, and truly that explains that sense of incompleteness that can be slightly unsatisfying. Nevertheless, while a tragically flawed film, "Subida al Cielo" is still a quite enjoyable comedy to watch, and a powerful display of the talents of the surreal master.

A problematic shooting almost as surreal as the film itself, resulted in one of Mexican cinema's most enjoyable movies. Despite its shortcomings, "Subida al Cielo" has a charm and a freshness that remains strong even today. It's hard not to like the adventure of this old, rusty bus through the Mexican jungle, where every passenger seem to find themselves through the trip's many hardships. Life and death, love and lust, joy and tears; on its way to Petatlán, this Mexican bus ride contains everything that life is, in a playful and celebratory manner. Maybe that celebratory manner is the reason of the film's appealing, because morality aside (well, morality goes out of the window in Buñuel's films), "Subida al Cielo" is basically a celebration of life.