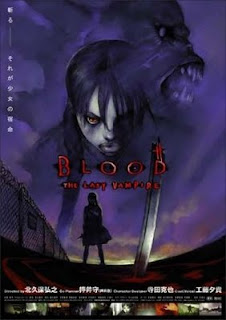 Since the 1970s, Japanese animation experience a tremendous growth in popularity thanks to the worldwide success of artists like Osamu Tezuka, Go Nagai and Yoshiyuki Tomino. Anime, the Japanese word for"animation", became the de facto term for the Japanese style of animation, and a synonymous for its very particular visual characteristics and wide array of thematics. Manga, the extremely popular Japanese comics, have been the source for countless anime films and TV series, thanks to the fact that adaptations of popular manga often guarantee an already captive audience. However, near the end of the 20th century, producer Mitsuhisa Ishikawa decided that instead of following that route, he wanted an original concept. To do it, he recruited famous anime producer Mamoru Oshii (of "Kôkaku kidôtai" fame), and settled on a concept by Kenji Kamiyama. With director Hiroyuki Kitakubo on board, the project became "Blood: The Last Vampire", a horror short film intended to break new ground in its genre. And, more or less, it did.

"Blood: The Last Vampire" is set in 1966, a couple of months before the Vietnam War, in the American Yokota Air Base located in Japan during the American occupation. A mysterious young girl, Saya (Youki Kudoh), enters the Yokota Air Base posing as a high school student but in reality, she is actually the secret weapon of an organization code named Red Shield. Armed with a katana, Saya's mission is simple: to destroy the vampire monsters known as Chiropterans. Saya's abilities as a vampire hunter come from the fact that she is the only remaining original vampire, and her relationship with Red Shield is more a partnership against a common enemy than a true collaboration. Agent David (Joe Romersa) is Saya's contact with Red Shield, and only human she respects. At school, Saya discovers that two of her classmates are vampires, and are plotting to take over the Air Base. Naturally a massive battle between the monsters and the vampire hunter begins, with Red Shield agents and the U.S. Air Force getting in the middle.

With a screenplay written by Kenji Kamiyama and characters designed by Katsuya Kerada, "Blood: The Last Vampire" brings a quite different take on the vampire myth, with the Chiropterans being monsters of unknown original able to transform into demonic bat-like creatures of great strength. The real vampire of the film is Saya, the sword wielding vampire hunter whose origins remain a mystery. In fact, this is actually one of the film's problems: basically everything is clouded by mystery, and not much is explained in the film's 48 minutes. Kamiyama's concept is certainly interesting, a young girl wielding a katana happens to be the last known real vampire, and is hired (used?) by the government to destroy the Chiropterans. Unfortunately, that is basically all that is known about the subject. What is known, is that Saya is unbelievably good at her job, and the battles she has with the Chiropterans are certainly the film's highlight. "Blood: The Last Vampire" is a highly dynamic action-packed film, but the mystery, while intriguing, is also a tad unsatisfying.

Where "Blood: The Last Vampire" succeeds is in the stylish visual aspect it has. Director Hiroyuki Kitakubo creates a haunting work of art with a very attractive visual design. Combining traditional and digital animation, the artwork in "Blood: The Last Vampire" is impressive, specially during the action sequences, which showcase a dark, gritty violence that still retain a certain beauty in their conception. The visual composition and overall mise-en-scène is particularly good. The music, by Yoshihiro Ike, adds a lot of atmosphere to the movie, fitting nicely the dark tone and atmosphere that Kitakubo was aiming for. However, the top-notch work of animation and Kitakubo's visual imagery are not enough to make for the lack of development the story has. It is true that often good stories are the ones that are kept simple, but "Blood: The Last Vampire" takes this simplicity to the extreme, and what results is a superbly animated piece that lacks the substance that would give a better constructed story.

The problem is that basically, Kamiyama and Kitakubo introduce a wide array of concepts that, while interesting, are never fully developed. From the mysterious Chiropterans to Saya's origins, not to mention Red Shield's real motives and the nature of its relationship with Saya, everything remains shrouded in mystery; and while this works nicely at keeping the intrigue high during the film's runtime, the lack of a proper conclusion leaves everything as a very unsatisfying mess. No answers, no solutions, just stylish and impressively animated action. Even the possibility of political commentary (given that the film is set in U.S.-occupied Japan) gets forgotten as are the several subplots that are hinted by the film. On a more positive note, the voice acting is particularly good, with Youki Kudoh delivering a very good performance as Saya. Interestingly, "Blood: The Last Vampire" was not dubbed, but actually produced almost entirely in English (as more than half the characters are American).

Unfortunately, "Blood: The Last Vampire" ends up being a mixed bag. The animation is flawless, and the visual design is quite attractive and interesting. But a the same time, in terms of story is a bit lacking and ultimately unsatisfying. The fact that it is a short film has nothing to do with this, as more care should had been taken to condense and develop the concept even in the shorter runtime. Because as it is, it can't help but feeling like an unfinished concept. Granted, a quite cool, original and interesting one, but still an unfinished concept in spite of that. Certainly, "Blood: The Last Vampire" has more positive elements than negative, but it still is a proof that amazing animation is not the only thing necessary for a great anime. The story is still essential.