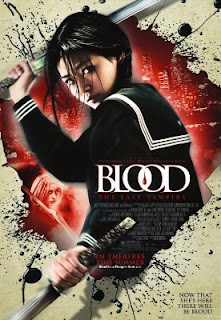 In the year 2000, famed anime producers Mitsuhisa Ishikawa and Mamoru Oshii released a short anime film that showcased revolutionary animation and a stylish visual design: "Blood: The Last Vampire". A tale of action and horror directed by Hiroyuki Kitakubo, "Blood: The Last Vampire" became one of the most popular and successful anime films of all time, earning worldwide praise because of its innovative animation and haunting atmosphere. Its popularity was big enough that soon talks began about adapting the short film to a live action feature length movie with William Kong ("Wo hu cang long") as producer and Ronny Yu ("Huo Yuan Jia") as director. Several changes took place and in the end, "Blood: The Last Vampire" ended up becoming a Chinese-French co-production with filmmaker Chris Nahon ("Kiss of the Dragon") at the director's seat. Unfortunately, the new incarnation of "Blood: The Last Vampire" resulted having nothing of what made the original good, and having instead a lot more of what prevented the original from being a true classic.

"Blood: The Last Vampire" is the story of Saya (Korean actress Jun Ji-hyun, using the English screen name Gianna Jun), a four hundred years old demon hunter. A half human-half-vampire, Saya was trained as a samurai and uses her supernatural abilities working for a secret organization named "The Council", which has been hunting demon vampires for centuries. Saya's relationship with The Council is a difficult one, and she only helps them out of a personal desire for revenge, as the ancient vampire Onigen (Koyuki) murdered her father. In the early 1970s, The Council takes Saya to U.S.-occupied Japan, sending her undercover as a student in Kanto High School near the Yokota Air Base. At school she saves Alice (Allison Miller), the general's base's daughter, from being killed by two classmates (Masiela Lusha and Ailish O'Connor), whom are actually vampires in disguise. Alice is shocked by the sight of Saya butchering her classmates and asks her father, General McKee (Larry Lamb) for help. Alice will soon discover that Saya is actually the only one who can help her.

Adapted by Chris Chow (writer of Yu's "Huo Yuan Jia"), this new version of "Blood: The Last Vampire" retains the basic core storyline of the anime film and adds diverse subplots and backstory to the film's characters. Certainly, the lack of any depth or backstory was one of the biggest flaws in the original "Blood: The Last Vampire", and Chow makes a commendable attempt at expanding the storyline in order to give some reasons and motives to the characters' actions. However, Chow's take at filling the holes in the unfinished story of the original "Blood: The Last Vampire" is not entirely a successful one. Chow abuses of tired clichés of the genre, and does it in a rather simplistic and cheapening manner. There are positive ideas, like the addition of Alice, which allows a greater development of Saya's personality; however, the convoluted plot is still plagued by holes and the bad habit of making Saya a flawless, practically invincible protagonist. Along with the lack of a strong villain, this results in a really unengaging story.

French director Chris Nahon shows off a vibrant, highly energetic visual style that is quite attractive visually, however, his narrative style is sloppy and fails to fully develop the film's concept. Granted, Chow's screenplay is not without its problems, but it is ultimately Nahon's directing what gives the final blow to "Blood: The Last Vampire". To be fair, Nahon does capture the stylish look and dark atmosphere of the anime, and recreates quite faithfully the original's action sequences. Hang-Sang Poon's work of cinematography actually gives the movie a distinctive personality of its own, and Clint Mansell's score is a highlight of the film. However, Nahon fails to translate Chow's screenplay to visual storytelling, and when it expands beyond the anime's plot, Nahon's tacky narrative seems to prefer flashy action scenes over advancing the plot and, while the action scenes do feature great work of choreography, it all gets messy thanks to some of the worst CG visual effects in a film of this caliber.

The performances by the cast range from very good to dreadful, and unfortunately this can be witnessed first-hand in the work of lead actresses. Gianna Jun is a joy to watch, and actually puts up a good effort as the demon hunter Saya. Without saying much, the young actress can express a wide variety of emotions, and also showcases talent for action sequences. On the other hand, Allison Miller delivers a pretty poor performance as Alice, and transforms what could had been an interesting role into a quite stereotypical token character that only serves as simplistic foil for Gianna's character. The difference between them is abysmal, and their lack of chemistry can be felt. Japanese actress Koyuki, who plays Onigen, is pretty much in the middle, delivering a pretty average performance, though to be fair, hers is the worst developed character, a mere caricature of what a villain should be. Irish actor Liam Cunningham gets wasted in a similarly underwritten role. The rest of the cast is pretty average as well.

If the original "Blood: The Last Vampire" lacked a proper story, Nahon's version lacks proper storytelling. More interested in crafting acting sequences, Nahon fails to give space to his characters, and leaves Chow's already convoluted screenplay an even more confusing mess. Despite his visual flare, Nahon is unable of letting the story flow visually, resorting to expositive dialogs and lengthy flashbacks to advance the plot. Still, Chow's screenplay is not without its fair share of flaws, the main one being the lack of a remotely interesting villain. The vampire demon Onegin sounds like an interesting character, but it is flatly developed and ends up being a quite lifeless entity no better than the other ninjas and vampires that are killed. Alice, a character that could had given great depth to Saya, becomes an underused element that seems to serve only to act like a damsel in distress, waiting for Saya to save her. The convoluted plot involving the CIA, the Council and the army is too carelessly developed and seems to be there to fill space.

Unfortunately, Chirs Nahon's "Blood: The Last Vampire" has more flaws than virtues, as it wastes an original concept in a quite typical action film with horror elements that adds nothing new to the genre (neither the original anime did, but at least it had an innovative work of animation). Certainly, the film has some good assets, particularly Gianna Jun's performance and the remarkable work of stunt choreography in the fight scenes. Sadly, it's not enough to save the lousy narrative and messy storytelling that plagues Nahon's "Blood: The Last Vampire". The myth of the vampire has inspired a vast amount of stories and interpretations, and probably will keep inspiring many more. Sadly, Nahon's "Blood: The Last Vampire" is not the one to look for a good action-packed vampire story.