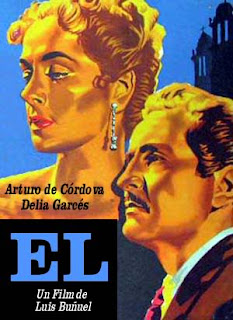 Celebrated as one of the most original and influential oeuvres in the history of cinema, the filmography of Spaniard filmmaker Luis Buñuel is a work rich in symbolism and artistry. Certainly, most of the praise focuses on the works Buñuel did in his late career, during his "French periods", dismissing the films done during his Mexican tenure. Nevertheless, while his career in Mexico was marred by low budgets, rushed deadlines and a big necessity for making commercial hits, it was also the period in which the master of surrealism cut his teeth, perfected his style and developed his very particular idiosyncrasies. In short, the period in which Buñuel grew from the young talent of "Un Chien Andalou" to the Surreal artist of "Le Fantôme de la liberté". Within the constrains of the Mexican film industry, the Spaniard master found the way to produce several of the most remarkable Mexican films ever done, and one of his most personal films was a dark melodrama titled simply "Él".

In "Él" (literally "He", but better known in English as "This Atrange Passion"), Arturo de Córdova plays Francisco Galván, a wealthy and respected man who meets an attractive young woman Gloria (Delia Garcés) at Church. Gloria, while somewhat attracted to Francisco, informs him that they can't speak to each other again. Francisco decides to follow her, but then he discovers the reason behind her words: she has a boyfriend, Raúl Conde (Luis Beristáin). Luckily for Francisco, Raúl is an old friend of his, so it doesn't take him much to orchestrate a way to woo Gloria away from Raúl. Gloria falls in love with Francisco, and the two get married quickly, nevertheless, Gloria's married life isn't the happiness she was expecting, as she begins to discover slowly that behind the exterior image of moral rectitude and impeccable behavior, is hidden a dominant and extremely jealous man. Francisco's jealousy begins to reach paranoid levels, and Gloria decides to escape from her situation.

Based on the autobiographical novel of the same title by Mercedes Pinto (which chronicled her first husband's mental problems) and adapted by Buñuel himself and Luis Alcoriza (his regular collaborator), "Él" is a sharp study on paranoia and mental degeneration, superbly crafted with a healthy dose of the writers' typical witty black humour. Nevertheless, "Él" is not only a tale about madness, as its multilayered screenplay conveys most of Buñuel's familiar thematic obsessions. Francisco is a wealthy churchgoer who has made for himself a public image of respectability and dignity. Nevertheless, this image is extremely fragile, as the slightest familiarity that Gloria could have with another man triggers in Francisco a violent jealous rage. The screenplay hints that Francisco's jealousy is the result of his repressed sexuality, having dedicated most of his free time to the Church (another of Buñuel's favourite targets). But still, Francisco is far from a simple insanely jealous character, being in fact, a pretty complex and human character.

The film also explores a pretty interesting visual narrative structure, being divided in three sections that allow to dissect the marriage of Francisco and Gloria. The first part details Francisco's courtship and culminates in their marriage, then the film flash-forwards several years into the future and finds a distressed Gloria meeting Raúl again, to whom she confesses her problems in a long flashback that makes the second part of the film. The final part returns to the present (and to Francisco) and details how advanced his madness is and the events that take place once he has found that Gloria has met Raúl again. Skillfully, the master unfolds his tale with a very smooth pace, and treats his subject matter not as a drama, but as a tale of suspense. "Él" is perhaps as close as Buñuel ever got to making a proper horror film. Visually, the movie is a joy to watch, thanks to the remarkable work of cinematography by the legendary Gabriel Figueroa, who captures the oppressive atmosphere of Francisco's household with striking angles and an expressionist touch.

Mexican actor Arturo de Córdova, a famous star of the Golden Age of Mexican cinema, delivers in "Él" one of the best performances in his career, leading the cast as Francisco Galván, the paranoid husband of Gloria. A popular leading actor of film noirs and complex melodrama, De Córdova was no stranger to playing charming gentlemen with tortured minds, having honed his craft in Mexican classics such as "Crepúsculo", "El Hombre sin Rostro" and "En la palma de tu mano". Nevertheless, it's in Buñuel's "Él" where he achieves perfection, delivering a performance that it's both captivating and repulsive, displaying a range that goes from the highest subtlety to the most violent outbursts. As Gloria, Delia Garcés is equally as impressive, playing the loving wife who has to suffer the irrationality of the man she thought was perfect. In Gloria's meetings with Raúl, Garcés manages to portray the humility and dignity of a woman who feels betrayed by herself and the world.

Perhaps the weakest link is precisely Luis Beristáin as Raúl, whom gets easily caught between the two towering performances of the lead actors. Nevertheless, this isn't really a big deal, given that the story revolves completely around Francisco and Gloria. Wickedly disturbing, but without losing entirely its black humour, "Él" is a powerful deconstruction of the machismo of society, with Francisco having first idealized his future wife Gloria, only to later accuse her mercilessly and irrationally of being an unfaithful wife when they are finally married. For Buñuel, this has its roots in the Church as an institution, as the religious Francisco tries to reconcile his preconceived ideas of woman as a saint and as a sinner, with no middle-ground in between. His unrealistic ideal of perfection gets tarnished when he lets his sexual desire to take over, and thus he proceeds to control by force everything he can, particularly when he feels weak or defeated.

One of the most personal films Buñuel ever did (in fact, he claimed it was the film where he had put the most of himself), "Él" is a masterful depiction of jealousy and paranoia, as well as a testament to the talents of both De Córdova and Garcés. Mixing perfectly comedy, drama and suspense, Buñuel crafts in "Él" a vivid portrayal of mental degeneration. Unnerving, thrilling, and yet delightfully funny, "Él" is a work that manages to work on multiple levels. Knowing that Alfred Hitchcock was a fan of Buñuel, one wonders if the revered British filmmaker got some inspiration from the film while developing his own masterpiece, "Vertigo". Like "Los Olvidados", "Él" is one of Buñuel's Mexican films that rightfully deserves more recognition as a masterpiece of cinema.