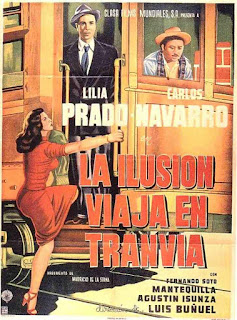 Having left his native Spain when Francisco Franco became dictator, director Luis Buñuel found himself unable to continue the promising career he had started in France. Luckily for him, he met producer Óscar Dancigers, who offered him to make a film in Mexico. Working for hire within the Mexican film industry, the surreal artist learned to make movies with commercial purposes with low budgets and tight schedules. Nevertheless, this didn't mean that the artistry of Buñuel's craftsmanship was lost in those movies done on commission. 1953's "La Ilusión viaja en tranvía" is probably one of the best examples of this, as it was originated with a purely commercial purpose: Servicio de Transportes Eléctricos, Mexico City's main Tramway company had suffered a lot of bad press due to the tragic collision of two trams (with many casualties) so, the management wanted a comedy film about tramways for public relations. Clasa Films, one of Mexico's biggest studios, took the job and hired Luis Buñuel to direct the film.

"La Ilusión viaja en Tranvía" (known in English as "Illusion Travels by Streetcar") is the story of two friends, Juan Godinez (Carlos Navarro) and Tobías Hernández (Fernando Soto "Mantequilla"), better known as Caireles and Tarrajas respectively. Caireles is a mechanic of streetcars, while Tarrajas is a driver, both live in a poor neighborhood in Mexico city. One day, near Christmas, they are informed that their Streetcar, no 133, will be decommissioned, which upsets both friends. That night, they go to a Christmas party and get drunk, and the two friends decide to take Streetcar 133 for a last night ride. Caireles and Tarrajas ride the streetcar through the city and begin to take passengers without charge, but as the next day begins and their drunkenness fades, the two friends realize that they'll get in trouble if they don't take the streetcar back. Weird situations take place as Caireles and Tarrajas try to take the streetcar back, and in the process, Caireles will fix his problems with his girlfriend, the beautiful Lupita (Lilia Prado).

As written above, the story of "La Ilusión viaja en Tranvía" was provided by Clasa Films, specifically by producer Mauricio de la Serna, though it was adapted to the screen by two of Buñuel's main collaborators: Luis Alcoriza and Juan de la Cabada (along José Revueltas and Mauricio de la Serna himself). The result is a light comedy clearly designed to entertain, but that also has certain touches of irony and social commentary. At its most basic, it's a simple adventure in which the two antiheroes, Caireles and Tarrajas find bizarre and funny situations in their trip across the city. Practically a road movie but enclosed within the city tramway lines, the film is of a somewhat episodic nature, but what elevates it from the rest is the great development its characters has. In "La Ilusión viaja en Tranvía", the journey is besides the point, what truly matters are the relationships between the characters: Caireles and Tarrajas' friendship, their enmity with the company and old worker Papá Pinillos, and of course, the romance between Cairles and Lupita.

While "La Ilusión viaja en Tranvía" was a work done for hire, the film is staggeringly similar to Buñuel's own "Subida al Cielo", and in fact it feels like a more polished and accessible version of that previous film. Like in most of his Mexican films, the commercial constrains of the project brings out the best of Buñuel's craftsmanship, and "La Ilusión viaja en Tranvía" showcases the master at the top of his game. However, the fact that this film is purely a comedy certainly allowed him to display his taste for irony and his sharp humor. Despite clearly not being his most personal work, there are several touches of his typical obsessions, particularly his jabs at the Church (most prominently the pastorela scene) and the sexualization of Lilia Prado's legs (incidentally, Prado also appeared in the aforementioned "Subida al Cielo"). While a comedy prone to absurd, the film's atmosphere is one of touching realism, with cinematographer Raúl Martínes Solares making a truthful portrait of life of the working class in Mexico City of the time.

As written above, the characters are the heart of the film, and the cast makes the most of this in their performances. Leading the cast as Caireles, Carlos Navarro is pretty good as the down on his luck mechanic who seems apparently unmotivated to make anything with his life. Navarro manages to make a charming rogue of a role that could had been easily an unlikeable character. However, the highlight of the film is comedian Fernando Soto "Mantequilla", who makes the most of his role as Tarrajas. With great charm and skill, Soto steals every scene he is in, showing a vibrant energy and dignity that makes his role more than a mere bumbling sidekick. In fact, there's a certain subtlety that refrains him from being an overacted archetype. And subtlety seems to be the key, as Lilia Prado's performance as Lupita is also subtle in her sensuality. If in "Subida al Cielo" she was a lustful temptress that represented wild desire, in this movie she is the voice of reason that unwillingly ends up in the middle of Caireles and Tarrajas' wild ride.

Agustín Isunza completes the main cast as Papá Pinillos, a retired streetcar worker who is decided to stop streetcar 133 out of loyalty to a company that has forgotten him. In fact, the four characters represent different sides of a sector of Mexican society that seems, like streetcar 133, on the verge of oblivion as the city progresses. The four are working class antiheroes, perhaps they are disenchanted, ignorant, angsty or old, but still, they are the people. It is in this aspect where the magic of "La Ilusión viaja en Tranvía" is, as Buñuel conveys the harsh aesthetic of "Los Olvidados" with the most heartfelt tone of comedy. It's still an exploration of the working class and their tragedies, but trading the cruel pessimism for a certain dose of tenderness that while odd in a Buñuel film, still feels strangely honest in its delivery. Interestingly, for a film made with the idea of give good name to the Tramway company, it does make the company a faceless villain, as Buñuel sides unabashedly with the working class.

Often considered a minor film in Buñuel's canon, "La Ilusión viaja en Tranvía" is one of the best movies he did during his Mexican period. While it certainly lacks the familiar touch of surrealism that his better known French films have, there are elements in the film that makes it particularly valuable. For starters, the time capsule quality the movie has, as it brings back a Mexico City captured in time like few movies of its period does. Also, there's Fernando Soto's brilliant comedic performance, but most importantly, the most remarkable asset of the film is big heart it has, as "La Ilusión viaja en Tranvía" is a film in which Buñuel allows himself to be tender. It could be argued that this is because of the commercial intention of the movie, but whatever had been the cause, "La Ilusión viaja en Tranvía" is a film that oozes magic, nostalgia, and yes, illusion.

Thanks for the review, J. Luis. I agree with you, the characters drive this film (pun intended) and Carlos Navarro is a very welcome surprise to me. As for the lack of surrealism that I read about here (to some extent) and in a few other reviews (out of imdb), I would say for me it has the usual dose I've come to expecto from Bunuel: mainly in the Christmas play (Mantequilla playing both the devil and Adam could be interpreted as a lack of continuity otherwise) and surely the whole sequence of the slaughterhouse workers riding the tram early in the morning and hanging all sorts of animal body parts in it, handing out "their" guts and hearts to Lilia Prado; the drunken aristocrat in the middle, the image of Christ suddenly showing up, etc. But then again, what is not surreal at those early hours of the day?

Oh, and thanks for the recommendation for Subida al Cielo. I haven't seen it and if I loved Lilia Prado in this one, I definitely have to see that one soon.

And on the surrealism of after hours, you are right. I guess this film speaks volumes to those of us who have spent a night or two doing wacky things at night.