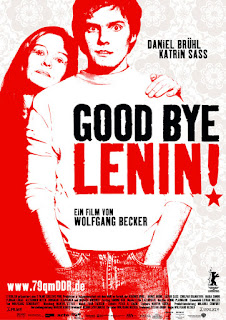 From 1949 to 1990, Germany was divided in two different states, Federal Republic of Germany and the German Democratic Republic (GDR). This as a result of divisions between the Allied powers (UK, USA, France and the Soviet Union) which had been occupying Germany since the end of World War II in 1945. Tensiosn between the West and the Soviet Union broke the allied cooperation and so the country was divided between in two states, one a capitalist country and the other a soviet republic. The city of Berlin itself became divided in 1961, when the Soviet government erected a wall, closing the border and splitting the city. The Berlin wall, symbol of the divisions of the Cold war, marked generations of Germans from both sides of the wall, and its destruction and reunification of Germany borough important social changes that left a powerful imprint in the nation's cinema. The effects of the change from the GDR to the unified Germany inspired filmmakers Wolfgang Becker and Bernd Lichtenberg to make "Good Bye, Lenin!", a film set precisely during those changing times.

The story begins in October 1989, in East Berlin, where young man Alex Kerner (Danie Brühl) lives with his sister Ariane (Maria Simon), his mother Christiane (Katrin Saß) and Ariane's baby daughter Paula. His father left the family in 1978, emigrating to the West side, while his mother remained an ardent supporter of the Socialist Unity Party of Germany. One day, Alex is arrested in an anti-government demonstration, an event that makes her suffer a heart attack, falling into a coma. During her coma, the German Democratic Republic she loved and defended with her life is gone, as a result of the fall of the Berlin Wall and the official reunification of East and West into one Germany. Soon the family enters the capitalist world with Alex earning a job installing satellite dishes and Ariane working at a Burger King. 8 months later Christian awakes to a different world, but her physical and mental state are still fragile, so Alex is advised that any shock may cause another heart attack. In order to protect his mother, Alex decides to keep the illusion that her mother's ideal nation is still alive.

Walking the thin line between drama and situation comedy, the screenplay of "Good Bye, Lenin!" (by Wolfgang Becker and Bernd Lichtenberg) tackles a political theme, but it's not really a political satire, at least not a common one. While politics set the background of the story, the core of the film is the family drama in which Alex gets into, as he goes to great extend to perpetuate the lie to his mother in order to protect her. Becker and Lichtenberg build up very interesting situations in which Alex must find a way to keep the lie going on. Not an easy job in a country that quickly begins to be filled with Coca-Cola ads and fast food restaurants, which increases Alex's difficulties with quite funny results. Nevertheless, the writers never really indulge in "Ostalgie" (the nostalgia for East Germany), and in fact, the position they take regarding politics seemed to be actually one of irony and cynicism (neither socialism nor capitalism are endorsed). But still, this cynicism doesn't take away the warmth and enormous heart the film has.

With a very fresh humor and solid visual narrative, director Wolfgang Becker makes of "Good Bye, Lenin!" a heartfelt tragicomedy that's not only charming, but also quite witty. Becker conceives wonderful set pieces to showcase Alex's desperate efforts to keep his mother's fantasy alive. However, as Becker's touch for comedy is remarkable, his talent truly shines in the way he tackles the dramatic side of the story, which he transforms into a quite poignant family melodrama. Certainly, the high quality of his screenplay helps a lot, though certainly, Becker manages to keep a lighthearted tone that remains true to the story without falling in the realms of parody. Because a plot like the one in "Good Bye, Lenin!" could had easily worked as a merciless satire of communism, however, director Wolfgang Becker makes it more a tribute, not to the German Democratic Republic, but to the people that truly believed in its ideals. The work of production designer Lothar Holler is remarkable in the way he recreates the period of the reunification.

Leading the cast as Alex is Spaniard actor Daniel Brühl, whom is clearly the star of the show. Delivering a performance full of energy and charm, Brühl gives life to this caring, yet slightly odd young man determined to keep his mother's dream of a triumphant East Germany alive. The interesting side of Alex is the fact that this deception, which is initially for his mother, begins to become an integral part of his own life as well. And his managing of both his mother's world and his real life begins to take a toll in him. Fortunately, he has recruited in this enterprise the help of his friend Denis, played by a vibrant Florian Lukas whom almost manages to steal the show with his natural talent for comedy. Another scene stealer is Maria Simon, who plays Alex's sister Ariane, as in her limited screen time she delivers nicely some of the best lines in the film. As Alex's girlfriend Lara, Russian actress Chulpan Khamatova is not only beautiful, but provides an effective foil to Alex. And finally, the talented Katrin Saß, who plays Alex's mom, is after Brühl, perhaps the highlight of the film, as with subtle gestures she manages to build up the complex character of the frail mother.

Perhaps the best thing about Wolfgang Becker's "Good Bye, Lenin!" is the way he manages to tackle its political subject without losing the charm or the warmth of his film. And this is mainly because the film never stops being a family drama. Certainly, politics play a major role in the plot, given that Christiane's ardent socialism is contrasted to her children's desire for change (Ariane eagerly embracing capitalism while Alex growing a bit disenchanted by it). However, the neutral, apolitical cynicism that Becker takes about politics prevents the film from taking a side of the political spectrum, and as written above, actually criticizes both economical systems. What matters in "Good Bye, Lenin!" is not whose in power, but the unity of a family, as Alex's insane attempt to create a living dream for his mother ends up uniting his family more than ever. And in this strong emotional core lays the heart of the film.

Witty, clever, and even poignant, "Good Bye, Lenin!" is a terrific tragicomedy that offers a nice portrait of a family living through the difficult years of German reunification. Director Wolfgang Becker has built up a charming film that's not only funny, but also touching without falling in cheap sentimentalism or mere nostalgia. If the movie has any flaw, that would be that's perhaps a bit too long, but other than that, it's a more than enjoyable tale of a family. In fact, despite the fact that it's deeply grounded in the history of a particular country, the story has an undeniable universal appealing. With great irony and a touch of self deprecating humor, director Wolfgang Becker has made in "Good Bye, Lenin!" a film that showcases that change is inevitable, and certainly difficult; but the human bonds are often stronger.