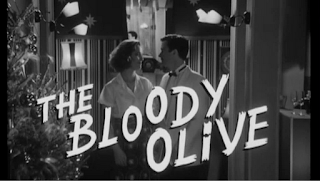 Film noir, French for "black film", describes a very particular kind of crime dramas that originated in the early 40s and had very distinctive traits. For starters, thematically they had connections to the hardboiled school of crime fiction that began during the depression, this results in stories with greater cynicism and a taste for morbid themes. However, perhaps the most distinctive trait of the film noir was the low-key lighting in its cinematography, which played with hard shadows in the style of German Expressionism. This stylish cinematography, result of having low budgets to work with, became a staple of Films Noir, and while the classic period of the genre ended in the 50s, its visual style has inspired countless homages and tributes ever since. It certainly inspired a young filmmaker from Belgium, Vincent Bal, whom used a distinctive film noir visual style to make a comedy short film shortly after finishing film school. The title? "The Bloody Olive".

With a runtime of barely 11 minutes, "The Bloody Olive" begins with a married couple, Werner and Mylène (Frank Focketijn and Veerle van Overloop respectively) preparing themselves for Christmas. The couple finishes the Christmas tree and is seen getting ready for the dinner, when suddenly, the doorbell rings. The visitor is Sam (Gene Bervoets), Werner's business partner and a good friend of the couple, whom arrives with a bottle of wine for them. However, Sam doesn't look like he's having fun, and accuses Werner of being stealing from the company. Sam claims he has proof, so Werner reacts by shooting his partner in front of a shocked Mylène. Werner explains that there wasn't really another way to do it, and that Sam's death can easily be explained as self-defense. But things aren't always easy, specially in films noir, and to everyone's surprise, Sam gets up not being really dead yet. This is only the beginning of a series of betrayals that prove that in film noir, nothing is what it seems.

"The Bloody Olive" has its origins in the 1994 graphic novel "Imbroglio", by French cartoonist Lewis Trondheim; however, director Vincent Bal takes the plot and fully adapts it to better blend into the film noir style he attempts (the novel, while also a jab at noir, has less emphasis in this, and in classic Trondheim fashion, the characters are anthropomorphic animals): and all without losing the black humor of the comic book. Certainly, it could be argued that "The Bloody Olive" is a one-joke short film (perhaps the bane of ), and that would be right in a way. Fortunately, director Vincent Bal elaborates on the joke with great skill, and in fact achieves a smooth transition from straight crime drama towards the absurd black comedy that "The Bloody Olive" truly is. The story unfolds at a nice pace, which begins slow in classic melodrama fashion and then gets increasingly faster as secrets are unveiled. Nevertheless, the true highlight of "The Bloody Olive" is its craftsmanship.

And this because its actually in the way that Vincent Bal and his team replicate the film noir style where the magic of "The Bloody Olive" is. As written above, the film is faithful to its source, however, Bal's decision of replicating the film noir aesthetics is more than appropriate as it transforms what originally was a fun yet simple parody ("Imbroglio") into a heartfelt tribute to the noir genre. And instrumental for this is the work of both cinematographer Philippe Van Volsem and Art Director Gert Stas, who make a remarkable achievement in bringing to life the somber vision of director Vincent Bal. From the low-key lighting to the somber atmosphere, "The Bloody Olive" is just perfect in its representation of film noir style; and actually this faithfulness ultimately serves for comic effect, as the contrast between the absurd of its story with the careful replication of the noir style results in a tongue-in-cheek homage to the most morbid excesses of film noir.

The acting in "The Bloody Olive" is particularly good, with each cast member doing their best to replicate the melodramatic tone and fast delivery of the 1940s acting. Actress Veerle van Overloop (of 1995's Dutch film "Antonia") plays Mylène, Werner's loving wife whom results to be more dangerous than any weapon. Van Overloop shines in her role, moving nicely between the two extreme female icons of film noir: the loving wife and the femme fatal. With her natural charm and her strong screen presence, she ends up being probably the best performer amongst the cast. Frank Focketijn plays her husband Werner, and also makes a pretty effective job as the sly Werner. Focketijn allows himself to go over-the-top at times, but he's never out of place and displays a great skill at comedy. Finally, Gene Bervoets plays Sam, and while he is a tad inferior to his co-stars, Bervoets isn't really bad, perfectly channeling the tough guy persona so typical of films noir.

Cleverly developed and brilliantly done, this little tribute to film noir is a quite amusing piece of work. In making an adaptation of a popular comic book, director Vincent Bal has gone beyond and delivers a quite enjoyable movie that not only remains faithful to its source, it actually builds up from there to create a heartfelt homage to a classic genre. Certainly the visual design is the film's strongest element, but it's also commendable the way Bal adapted the original comic book to suit his needs. The reconstruction of the period is excellent for a low budget film, and it does feel right at home with the films noir of the classic period. Still, this doesn't mean that "The Bloody Olive" lacks any problems, it has its fair share of flaws; the main one of them being perhaps the fact that in the end, it's still a one-joke film. Fortunately, director Vincent Bal's has focused greatly in his craftsmanship to make it an enjoyable experience. Yes, "The Bloody Olive" is a film of style over substance, but done right.

A lot of the charm of "The Bloody Olive" comes not from being familiar with the story, but from being familiar with the conventions of film noir, as the classic elements from those classic crime dramas can be found in an exaggerated form in "The Bloody Olive". Vincent Bal's film is perhaps an example of how an adaptation can be inventive with its source: while Lewis Trondheim's comic is fun by itself, Bal's film neither replicates it nor exaggerates it, it merely uses it as the basis to make a slightly more ambitious comedy. In "The Bloody Olive", director Vincent Bal proves that with talent and lots of imagination, an unforgettable movie can be done in the short format.