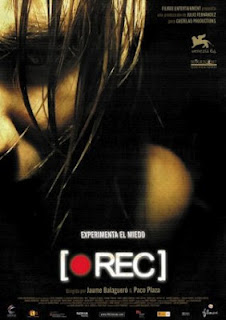 The second half of the 1990s brought a new generation of Spaniard filmmakers that seemed decided to redefine the face of Spanish horror. 1995's "El Día de la Bestia" (by Alex de la Iglesia) and 1996's "Tesis" (by Alejandro Amenábar) paved the way to new horror films that shared a quite distinctive style and a very Spaniard identity. The debuts of directors Jaume Balagueró ("Los Sin Nombre") and Paco Plaza ("El Segundo Nombre") could also be counted in this New Wave of Spaniard horror, and from the very start it's clear that both filmmakers have many things in common (for starters, both films were based on Ramsey Campbell's stories). The two of them would work together on "OT: La película", a documentary about the TV show "Operación Triunfo", and from then on a partnership was born. Given this background, it's not surprising that Balagueró and Plaza's subsequent collaboration would end up being a mix both horror and documentary: a found footage film titled simply "[Rec]".

"[Rec]" consists of the footage captured by reporter Ángela Vidal (Manuela Velasco) and her cameraman Pablo (Pablo Rosso), as the two of them end up in the middle of a nightmare. It all begins with Ángela and Pablo visiting a local fire station in Barcelona, where they are making a story on the night shift firefighters. Suddenly, the unit receives an emergency call from an old apartment building and leaves, taking the two reporters with them. However, as they arrive they find the building surrounded by police officers, and inside, some of the residents have gathered at the lobby, while screams can be heard upstairs. Firefighters Manu (Ferran Terraza) and Alex (David Vert) join two policemen (Vicente Gil and Jorge-Yamam Serrano) and go upstairs, followed by Ángela and Pablo, and what they find is an aggressive old lady (Martha Carbonell). The old lady bites one of the policemen, and ends up shot by his partner. Downstairs, they discover that the building has been sealed, and that they have left trapped inside. And they are not alone.

Written by Balagueró, Plaza and Luiso Berdejo, "[Rec]" is by all accounts, a zombie film of the modern variety. That is, the risen dead are ferocious and fast. The clever twist is not on the story, but on the execution of it, as the movie is told from the point of view of the camera. Now, what sets "[Rec]" apart from most found footage films, is the fact that this narrative device is cleverly put to work in the film. Certainly, at its core the story may just follow the usual path of zombie films, but the new perspective given by the camera point of view is quite suspenseful and fresh. Also, they way the story justifies this has a bit more of verisimilitude than most films in the same vein, as by having two ambitious reporters as the main characters, it truly helps to explain the voyeuristic mentality that makes them keep filming. Perhaps "[Rec]" could be blamed of being thin in character development, but this is an exemplary case of a film based entirely on style over substance.

Because "[Rec]" is all about style, with directors Jaume Balagueró and Paco Plaza pushing the found footage genre to the limit by making a horror film that truly evokes the sensation of watching a real catastrophe. The intensity, the adrenaline, the despair, everything is there to give the feeling of being in the middle of a war zone, and it works. Instrumental for this is without a doubt the remarkable work of cinematographer Pablo Rossi, who plays the cameraman while actually shooting the film. Perhaps this detail, apparently insignificant, is what adds this verisimilitude that "[Rec]" has that other similar films lack: the cinematographer is not an outsider to the action, but himself is in there, controlling the camera and taking the audience to the dark apartment where ancient secrets are being held. While simple in terms of plot, "[Rec]" is an interesting exercise in style, an attempt of bringing the horror to a first person point of view and an experiment in making the horror film an experience.

Another key element for the success of "[Rec]" is the highly energetic performance of Manuela Velasco as reporter Ángela Vidal, who carries the film with strength and a natural charm that allow her to create a character that, while not being exactly likable (Angela is unscrupulous at best) manages to still be interesting to see. While her character may be simple, Velasco creates a very well defined identity for her role, and manages to transmit the sense of danger that her character lives through the chaotic night at the apartment. The rest of the cast is for the most part as good as Velasco, despite the fact that most play the classic archetypes of horror films. Ferran Terraza, as Manu, is quite effective as firefighter Manu, whom becomes the de facto leader once the building is put to quarantine. However, the best amongst the supporting cast is Maria Lanau, who plays the hysteric mother of Jennifer, a little child ill with what her mother claims is tonsillitis.

As written above, "[Rec]" is a film in which the execution is the key. While its plot doesn't sound like the most original horror film written (more than once it falls in genre clichés), it's magic and its power are in the way Balagueró and Plaza have narrated the story. While zombie films with first person narrative aren't new (2006's "The Zombie Diaries" being an earlier example), "[Rec]" is perhaps the first that manages to pull off the degree of verisimilitude and realism that found footage films attempt to convey. What "[Rec]" lacks in character development, it compensates with the adrenaline-rush that it has in its storytelling, which is intense, energetic and vibrant; truly transmitting the horror of being in the middle of a zombie apocalypse. Instead of channeling Romero's "Dead" films, what "[Rec]" evokes are disaster documentaries and news reports, and for a mockumentary that aims for realism, that is high praise.

In "[Rec]", directors Jaume Balagueró and Paco Plaza have achieved to deliver a found footage film that succeeds in telling its tale with disturbing realism and a haunting atmosphere. This two filmmakers have understood the possibilities of first person narrative, and have successfully translated the intensity of the modern zombie genre to this narrative device with great power. Thanks to the great acting from the cast and Pablo Rossi's incredible cinematography, the illusion of realism is achieved despite the film's fantastic premise, and ultimately "[Rec]" becomes a haunting roller-coaster of horror that never loses its high speed rhythm until the very end. In this sense, more than just a horror movie, "[Rec]" is an experience.

I liked this one a lot, a great, dark little rollercoaster piece of genre filmmaking.

I first saw it the same week I saw the American remake QUARANTINE, and I'd recommend watching both in succession, in that this really serves to both emphasize how very good REC really is and to vividly illustrate the difference between committed filmmakers doing something different and hired guns grinding out a big-studio rip-off for a quick buck. QUARANTINE physically replicates REC as closely as any "remake" ever has an original. Scene by scene, it's virtually identical, and even looks as if it was filmed on exactly the same sets. It has none of the soul of REC, though. It's as hollow as a gord, a bad movie made from a complete lack of ambition, one that has absolutely no reason to even exist. REC chops it up and leaves it for the buzzards.

Yeah, I also watched "Quarantine" back to back and I agree completely. Well, I wouldn't call it a bad movie, because it had good moments. Nevertheless, those good moments are basically copied from "Rec". I guess that's more a testament of the quality of "Rec".

"...as by having two ambitious reporters as the main characters, it truly helps to explain the voyeuristic mentality that makes them keep filming."

That is a good explanation and you have a point there, since I find these "found footage" films very interesting, but it always bugs me that the camera films absolutely *everything*, as if someone would take more care about how to keep a focus of a camera than to run away from a monster. Having reporters makes far more sense in such stories. I think "REC" is a good film, a little bit hasty and chaotic, but with a "killer" ending.

Yeah, I find the decision of "film everything" to be at times incredibly illogical in certain films ("Cloverfield") for example.

Any cameraman will tell you that it's quite difficult, even for a pro, to film and being aware of the environment at the same time (hence the existence of the assistant cameraman).

Thanks for stopping by!