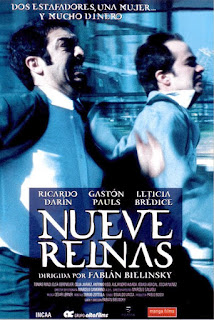 The abrupt end of a life is always a tragedy, particularly in young people, as it leaves the question of what would they do if they were alive. In the case of an artist, this is specially meaningful, even more if the deceased artist was just beginning to get recognition. This is the unfortunate case of Argentine filmmaker Fabián Bielinsky, whom after having made two critically acclaimed movies, died on his sleep from a heart attack, at only 47 years of age. A testament of his talent is the fact that in only two films, Bielinsky managed to develop a distinctive style of his own, different to anything found in the cinema of Argentina at the time. The first and most popular of his two films, "Nueve reinas" ("Nine Queens"), was a crime thriller with a quite particular tone of comedy and irony that ended up winning multiple awards both in its native country and abroad. And not without a reason, as "Nueve reinas"' careful construction truly shows what a real loss was Bielinsky's death.

"Nueve reinas" opens in a small convenience store where Juan (Gastón Pauls), a young con artist, successfully scams the cashier, only to be trapped while trying to perform the same trick twice. Marcos (Ricardo Darín) pretends to be a police officer and takes Juan away. On an alley, Marcos explains to a surprised Juan that he is not an officer, but also another con man. Marcos offers Juan the chance to be his partner for a day, and while Juan is reluctant at first, he accepts as he needs to raise money to help his father in jail. After several successful cons, Marcos receives the call from a former associate, Sandler (Oscar Nuñez), whom asks Marcos help in a rare scheme: Sandler has made perfect counterfeit copies of a rare set of stamps called "The Nine Queens", and was trying to sell them to a rich Spaniard (Ignasi Abadal) who is being deported the following day (therefore unable to check the stamps' authenticity). Sandler was unable to do it alone because of his health, so the pair decides to enter the scheme.

Intelligent, witty, and with a good dose of humor, "Nueve reinas" is a solid thriller in which director Fabián Bielinsky (who also wrote the screenplay) plays with the caper film genre to deliver and entertaining tale of two con men. As the film unfolds, Bielinsky increases the stakes, putting his characters in even more complicated situations with every new plot twist. Nevertheless, while certainly the clever plot that Bielinsky crafts is quite thrilling, but in the most Hitchcocknian fashion, the Nine Queens scam is merely a MacGuffin, as the real magic in "Nueve reinas" comes from the way in which he he has developed the two main characters and their relationship. Particularly since both men are con artists, so trust won't become easily a bargaining chip in the deals between them. However, necessity and casualty has brought them together, the experienced master and the young talent, to take their chances and pull off this ultimate scam.

While certainly Bielinsky's ingenious screenplay is marvelous, his talent as a director is well worthy of recognition too, as he crafts his film with a simple but slick style that suits nicely the casual tone of the film. With a certain grace and elegance, Bielinsky lets the film's plot to unfold smoothly, embracing the audience in its captivating spell, not unlike the scams his characters perform, functioning like a precise clockwork with the perfect timing, the perfect tone. While working with a quite low budget, Bielinsky gives his film a well defined visual style, a bit traditional perhaps yet very attractive. Cinematographer Marcelo Camorino captures the urban setting with an elegant beauty, his camera getting deeply into the streets that make the characters' natural environment. Nevertheless, Bielinsky doesn't use any flamboyant visual style, knowing (like Mamet) that the strength of his movie is in the language the characters talk.

So, given that the screenplay what matters, the actors reciting the lines are of key importance for the success of the film. And fortunately, the acting is one of the strongest elements in "Nueve reinas". Leading the cast as the talented but unexperienced Juan, Gastón Pauls shows a natural charm in his performance, playing the role of the young apprentice with great verisimilitude. However, "Nueve reinas" belongs to the masterful performance of Ricardo Darín, who plays Marcos. As the smooth-talking con man Marcos, Darín commands the screen with power, showing he is a resourceful actor skilled at creating multidimensional characters. Because no matter how good a script is, a bad actor could had ended up making the role looking like the stereotype it may be. A talented one, like Darín, embodies the character and delivers a real person out of it. The rest of the cast, while having much less screen time than Pauls and Darín, they all deliver effective performances, particularly Leticia Bréndice, who plays Marcos' sister Valeria.

Bu the real star of "Nueve reinas" is without a doubt its director, Fabián Bielinsky, who showcases his talent for storytelling by weaving his tale with great skill. While the plot is relatively simple (the afore mentioned Mamet has produced stories of greater complexity), the way Bielinsky has transformed it into a puzzling tale is just captivating. "Nueve reinas" is a masterful example of how to flesh out a story. By adding the necessary amount of detail to make it interesting and unique, Bielinsky has built up his caper thriller with the same care he would stage a confidence trick: with the perfect timing and the appropriate tone, the adequate rhythm and the right cadence. There are few things that go wrong in "Nueve reinas", as every element plays its role in the puzzle to great effect. Perhaps there's a moment in which the absurdity of the cons is a bit too much, but the dry, deadpan humor that Bielinsky employs keep everything in the right mood.

Sly, ingenious, and owner of a delicious dark humor, "Nueve reinas" showed the talent of a filmmaker that, without any great pretensions, managed to create an entertaining thriller with intelligence and wit. Because it's this intelligence what separates "Nueve reinas" from similar yet banal thrillers, as it allows the film to unfold its story with a style that few have. After "Nueve reinas", Bielinsky was offered the chance of making an American remake, opportunity he refused in order to make "El Aura". The remake, titled "Criminal" was still produced with Gregory Jacobs at the helm. Sadly, Bielinsky died just when his career was on the rise. Watching the triumph that is "Nueve reinas" makes one realize just what a great loss for cinema was Bielinsky's untimely death.

Hi, J. Luis. I haven't seen this one but saw the US remake. While entertaining, I must say I never quite bought Diego Luna as the young con artist, which I guess goes to prove your point that you need very good actors to pull the tricks off. I usually like his work, but not this time. I think the film was weak and since I already know the twist(s), I don't think I'll watch the original any time soon.
Cheers!

I think you should give it a try, it may be like a joke... it doesn' tmatter if you know the punchline, the delivery is what counts.