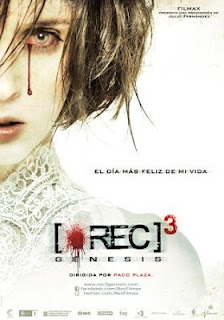 In 2007, Spaniard filmmakers Jaume Balagueró and Paco Plaza took the found footage concept (popularised by "The Blair Witch Project") to make a zombie film that was named "[Rec]". In this movie, they told the story of a reporter and her cameraman who, while making a coverage about a firefighters unit, ended up trapped in an apartment building infested by people infected with a virus that made them furious monsters. Shot from the point of view of the camera, "[Rec]" made great use f this resource to tell a story filled with suspense and horror that respected faithfully the genre conventions while at the same time was redefining them. The film was an enormous success, and two years later the duo repeated it in "[Rec]²", sequel that added a more action-oriented tone while expanding the background of the first movie. To close the series, both filmmakers have decided to make two films, each director making their piece of the conclusion. The first is the one by Paco Plaza, and it's titled "[REC]³ Génesis".

Unlike the previous two films, "[REC]³ Génesis" begins far away from the apartment building, as the action takes place in a small town where the wedding of Clara and Koldo (Leticia Dolera and Diego Martín respectively) is taking place. To the church arrive the family and friends of the couple, while the event is being taped by cameraman Atún (Borla González). Finally, the ceremony is over and Clara and Koldo are now husband and wife, so the group moves to a mansion where the wedding reception will be celebrated. Uncle Víctor (Emilio Mencheta), apparently drunk, falls from the second floor to the dancing hall, provoking panic in the guests. However, Víctor is not drunk, but infected and is now a monster. To everyone's surprise, more infected arrive to the hall and all hell breaks loose. Koldo and Clara are separated during the chaos, and Koldo ends up with a small group locked in the kitchen. Decided to not leave the place without his wife, Koldo begins a dangerous quest to find his beloved Clara.

Written by Paco Plaza and Luiso Berdejo (writer of the first "[Rec]"), "[REC]³ Génesis" is not exactly a straight sequel to the previous film's plot, but an alternate story, as it begins hours before the events of the first film and takes place during the same nightmarish night. And as an alternate story, "[REC]³ Génesis" is defined by a desire to find its own style, breaking with the tone imposed by the previous installments of the series. For starters, there are more elements of black comedy in "[REC]³ Génesis" than in the more sober previous films. This doesn't mean that horror is abandoned, not at all, but that there is a greater communion of both genre in the plot; and actually, Plaza and Berdejo manage to make of this mix a quite functional one. So much that it truly gives "[REC]³ Génesis" an identity of its own, making it a sharp commentary on modern Spanish society, to the family that gathers at weddings with the purpose of celebrating, gossiping and being hypocrites.

And this rupture with the past that Plaza makes in "[REC]³ Génesis" goes beyond the change in tone: in terms of style, Plaza opts to make "[REC]³ Génesis" in a traditional way, leaving aside the first person point of view that had been the trademark of the "[Rec]" series in its previous installments. While the film begins narrated from the point of view of Atún's camera (and also the one belonging to Koldo's cousin), this is literally abandoned with the destruction of both cameras. However, this isn't done without a reason, as what Plaza tries in "[REC]³ Génesis" is not a personal identification with the situation, but this time, with his characters. Unlike the previous films, in "[REC]³ Génesis" the characters are now of greater importance, as the film is now entirely the story of the couple trying to find themselves in the middle of the zombie chaos. Nevertheless, even when the narrative is of a different style, the work of cinematographer Pablo Rosso (who has worked in the entire series) is again of the highest quality.

As mentioned before, the story is focused entirely on Clara and Koldo, and the actors who play them truly make a remarkable job in their roles. The star of the show is without a doubt Leticia Dolera, who plays Clara, creating a complex and multidimensional character by using mainly her physical presence. Going from a frail and shy woman to a fully determined zombie killing machine (chainsaw included), Dolera makes of Leticia a truly iconic character. And with great subtlety (and thanks to the screenplay by Plaza and Berdejo), this transformation never feels forced or out of place, on the contrary, it's fully in character as she's a woman who has been waiting her life for this moment and won't let anyone to take it from her. Slightly inferior is Diego Martín, who plays Koldo, as unlike Dolera, in his performance there are moments in which Martín does feel a tad wooden in his role. However, in general, his work is up to the challenge, perhaps not in Dolera's level, but not really bad.

As can be seen, "[REC]³ Génesis" is at the same time so different and also so similar to the previous films, that could generated mixed feelings about it. On one side, "[REC]³ Génesis" keeps pretty much coherent towards the already established mythology of the series, and it even explores more into the nature of the infected people. Also, Plaza doesn't hold back in creating wonderful scenes of graphic violence in which beauty and horror are combined in front of Pablo Rosso's camera in an extraordinary way. Nevertheless, the rupture in tone and form with the previous two films leaves a strange feeling at first, as if despite the title and the zombies, this "[REC]³ Génesis" wasn't really very "[Rec]" after all. Certainly, it's admirable how Plaza tries to make his story to have a different flavor, nevertheless, perhaps he may had gone a bit too far in his attempt. What is truly commendable is the fact that Plaza has created in "[REC]³ Génesis" sequences that surely will become icons of modern Spanish horror.

In the end, it could be stated that "[REC]³ Génesis" is two things at the same time: a brilliant horror comedy about zombies, and a somewhat unsatisfying "[Rec]" installment that perhaps would work better with a different, unrelated title. But well, those are perhaps mere details, as what matters is that in "[REC]³ Génesis" Paco Plaza proves to be an original filmmaker, with great knowledge about the horror genre, and delivers a masterful lesson in combining black humor with raw gore. Fun, entertaining and even moving, "[REC]³ Génesis" may not be very "[Rec]", but it's actually pretty good.