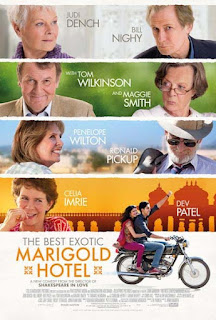 Without a doubt, arriving to the old age is truly a change of life as hard as adolescence, perhaps even harder, as when it shows up there's a greater resistance to the changes that come with it. And yet, sooner or later the human being will end up adapting to these new stage of life, perhaps even with some new instances of self-discovery. This posibility inspired British author Deborah Moggach to write the book "These Follish Things", a novel published in 2004 (when the author herself was already 56 years old) that explores precisely this theme, with a touch of cultural shock, as the novel deals with a group of British senior citizens who are sent to a retirement home in India. Seven years later, writer Ol Parker and filmmaker John Madden offer an adaptation of "These Foolish Things", now with the title of "The Best Exotic Marigold Hotel" and with a strong cast that gathers some of the best British actors of their generation.

"The Best Exotic Marigold Hotel" revolves around the lives of several characters: Evelyn (Judy Dench) is a housewife whom after the death of her husband realizes that she hasn't lived her own life, Douglas and Jean Ainslie (Bill Nighy and Penelope Wilton) are a couple who has lost their retirement savings investing in their daughter's company, Graham (Tom Wilkinson) is a High Court judge whom has suddenly decided to retire and travel to the country of his youth, Norman (Ronald Pickup) is an aging bachelor who still has the ambition of being a Casanova (Ronald Pickup), while Madge (Celia Imrie) is a widow unable to live without the company of a man in her bed. Finally, Muriel (Maggie Smith) is a strict and racist old woman forced to travel to India to have the hip replacement she needs. All of them find in the Best Exotic Marigold Hotel a promising (and cheap) place to live their retirement, but what they find when they arrive is a place in ruins whose enthusiastic owner (Dev Patel) dreams to improve.

The screenplay by Ol Parker takes the premise of Moggach's novel and develops it as an ingenious light comedy in which this group of forgotten characters discover in the remote India a bit of themselves. Unlike the novel, Parker focuses only in his elderly characters, whom have been practically left aside by their families back in England. However, this toning down of the novel's plot doesn't mean merely a simplification, as Parker's script keeps with inteligence the typical wit of British humor. Parker manages to unfold the very different stories of his group of quirky characters with great skill, with a good development of the relationships between them and how they affect each other. Graham's story and the one of the Ainslies are particularly moving and captivating ones. In general, Parker does a great job at handling so many characters, though it's worth to point out that there are also a couple of them in which he could had gone deeper.

Director John Madden brings these stories to life with a solid work of directing, taking good advantage of the effective work of cinematographer Ben Davis, who captures the vibrant colors and seductive shapes of the culture of India, contrasting them sharply with the grayness of that good old England that the characters leave behind. However, Madden doesn't employ any complex visual flair in his vision, on the contrary, he keeps a natural and realist touch, giving space to his actors to work in their characters. In fact, Madden avoids falling in that typical travelogue style so common in films set in exotic locations, and instead, he focuses totally the attention to his characters, who are truly the film's heart. Despite having a big group of characters, Madden unfolds his story at a nice pace, keeping a slick and dynamic visual narrative that allows him to move between the different subplots that are developing in the film.

The cast of "The Best Exotic Marigold Hotel" is truly a collection of first class British talent, with Judi Dench at the head playing Evelyn, a shy old lady willing to discover the world. Dench offers a warm performance, full of her natural charm and talent. Tom Wilkinson makes a remarkable job as Graham, the retired High Court judge who travels to India with a very particular mission of his own. HOwever, and while both Wilkinson and Dench make a brilliant job, the real scene stealers are two different actors: Bill Nighy and Maggie Smith. With great subtlety and an excelent timing for the dry humor that Parker's script handles, veteran Bill Nighy delivers an amazing performance in which he displays his enormous talent. The other gem in the film is Maggie Smith, whom makes a powerful performance as Muriel, the arrogant and racist old lady who feels trapped in a country she despises. It's a testament of Smith's talent the way she makes the most of her quite unlikable character.

As the wife of Bill Nighy's character, Penelope Wilton faces role as difficult as Smith's, perhaps even more, as her character is another in the group who refuses to adapt to the culture of India. Wilton makes of her hateful character something more than a the mere charicature that she could had bee, as she gives her great verosimilitude and a well defined identity of her own. In minor roles we find Ronald Pickup, Celia Imrie and Dev Patel, all of them making a remarkable job in their roles, particularly the beautiful Imrie, whom as Madge, makes a terrific performance. So good that it becomes a bit sad the fact that hers is perhaps the least explored character in the plot. And this is the great problem of Parker's script: the character development is a bit uneven, with a couple of subplots ending with the feeling of being incomplete. However, despite this problem, it's quite commendable the way that Parker manages to keep logic and inteligence as he weaves his stories.

8/10 is a great raing, mate. When I saw that you'd reviewed this I was very surprised as it didn't seem like the kind of thing that would interest the likes of you or I (forgive my assumption). I saw the trailers for this and wasn't won over but that great cast is, of course, very tempting.

Bill Nighy is always pure class. The film is all about the cast.