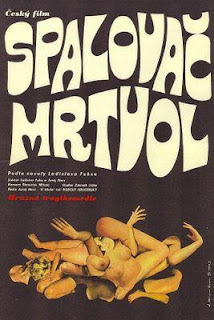 Conceived within the walls of the Film and TV School of the Academy of Performing Arts in Prague (FAMU) in the early 1960s, the Czechoslovak New Wave was an important artistic movement that brought light to the artistic sensitivities of a new generation of filmmakers from the communist country. A generation that included amongst its ranks Miloš Forman, Jirí Menzel and Jaromil Jireš, directors that would later become the major figures of Czechoslovak film industry. However, there were also filmmakers who, while less famous, had an equally interesting contribution to the movement, and one of them is Juraj Herz. The reason behind the apparent exclusion of his name from the more famous poster children of the Czechoslovak New Wave is simple: he wasn't a film student, but a theatre student, specifically a puppeteer. However, this puppeteer would bring one of the most interesting styles amongst the movement, one grounded in the horrific and the grotesque, and "Spalovac mrtvol", "The Cremator", is perhaps the best example of it.

Set at the onset of the occupation by Nazi Germany, "Spalovac mrtvol" tells the story of Karl Kopfrkingl (Rudolf Hrusínský), the man in charge of a crematorium in Prague. While friendly and sociable, Karl has a morbid fascination with the dead which he fuels with his reading of the Tibetan Book of the Dead. To Karl, the cremating of a body is necessary for the correct liberation of the soul. Nevertheless, despite the morbidity of his obsessions, Karl remains a loving father to his children Zina (Jana Stehnová) and Mili (Milos Vognic); and though he is attracted to other women, he keeps a cordial albeit distant relationship with his wife Lakmé (Vlasta Chramostová). Karl feels his life is in correct balance, however, when the Nazi forces enter the Czech border, he is invited to join the Nazi party because of his German heritage. The Nazi agents will play with his obsessions, awaking the manias that Karl has hidden in the deepest side of his soul.

"Spalovac mrtvol" was based on the novel by Czech author Ladislav Fuks, whose entire oeuvre revolves around German occupation of Czechoslovakia. The screenplay was adapted by Fuks himself along director Juraj Herz, whom use the story of the deranged cremator to make an allegory of the progressive introduction of Nazi ideologies into Czechoslovakia's society. Taking advantage of Karl Kopfrkingl's ambitions and delusions of grandeur, the Nazi influence completes the transformation that makes this morbid yet harmless man to turn his darkest fantasies into a reality. So, driven by his new beliefs, Kopfrkingl is now able to turn against his friends and family, fully convinced that his actions are actually for "the greater good". And what's perhaps more interesting about "Spalovac mrtvol" is that this dark, disturbing tale of psychological horror is told with a great dose of black humor that oddly, gives the film a quite fitting touch of irony.

However, the most striking feature of "Spalovac mrtvol" is its visual narrative, which director Juraj Herz conceived as a highly stylized Gothic nightmare in which disorientation is the key. A disorientation devised to reflect the twisted mind of the film's main character, whose train of thought twists and turns from the morbidly macabre to the downright grotesque. And to do this, Herz makes good use of the lavishly beautiful expressionist cinematography by Stanislav Milota and the frenetic work of editing by Jaromír Janácek. Jump cuts, montages, and a narrative that shifts from linear to non-linear, are some of the tools Herz employs to disorientate, but rather than being clichéd, they feel appropriately in tone with the story. Cinematographer Milota nicely employs the distortion of fish-eye lenses to evoke the distorted vision that Karl has of life, and by playing with light and shadows, Milota creates an unsettling Gothic atmosphere that suits nicely the quirky tone of the film.

As the title character, actor Rudolf Hrusínský shines in the role of Karl Kopfrkingl, the cremator whose twisted desires will take him to a descent to madness. While in a way Karl could be seen as an exaggerated caricature of a madman, Rudolf Hrusínský's remarkable performance gives uncovers the many layers the character has and unveils a complex and somewhat tragic figure. With great use of subtle yet noticeable mannerisms and his powerful screen presence, Hrusínský completely becomes this deranged individual, able to be sympathetic and horrifying at the same time. Certainly, in many ways "Spalovac mrtvol" is entirely Hrusínský's show, however, while the supporting actors in the film do have a considerably inferior space to develop their roles(after all, the film is told from Karl's perspective), some of them truly make an effective job, particularly Vlasta Chramostová, who plays Karl's dutiful and timid wife Lakmé.

Perhaps the most disturbing horror amongst the many conjured by Juraj Herz' "Spalovac mrtvol" is the very fact that while this is an exaggerated tale, it may actually have happened in a way. As the film starts, Karl knows and respects many people who are Jews, however, after the Nazi ideology enters his mindset, the morbid cremator is unable to conciliate those thoughts and begins to see them in a bad light. Behind the horrors unleashed by the deranged Karl himself, the real horror of how the Nazi ideology slowly infiltrated and changed a society's mindset is the most haunting element in "Spalovac mrtvol". In Herz' nightmarish Gothic world, the morbid cremator is certainly a monster, but greater monsters are those playing with his mind. Karl is convinced that his actions are helping a good cause, that he is cleaning the contaminated souls of the world, helping them to achieve peace. Karl's actions are a reminder that the path to hell is paved with good intentions.

While his membership of the Czechoslovak New Wave is often disregarded, the work of director Juraj Herz has many of the trademarks of the movement, though his perspective is often a more perverse and cynical one, and "Spalovac mrtvol" is perhaps the best example of it. Unnerving and grotesque, yet at the same time absurd and darkly comic, "Spalovac mrtvol" or "The Cremator", is a unique gem of Czechoslovak cinema that employs the horror genre to bring light to the real horrors of Nazi occupation. Though more than being an accusatory film, "Spalovac mrtvol" is instead a cathartic one, a film that through its grotesque imagery may help to understand a madness that turned a country against itself.