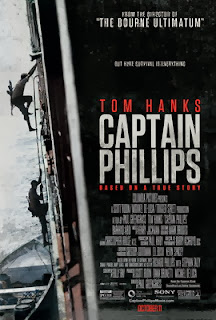 On April 8, 2009, a gang of four Somali pirates boarded MV Maersk Alabama, a container ship traveling 240 nautical miles off Somalia's coast. At the helm of MV Maersk Alabama was captain Richard Phillips, who had the mission of taking the cargo to Mombasa, Kenia. The situation got complicated when the crew captured one of the pirates and started negotiations to switch prisoners. The pirates secured their escape on a lifeboat, but took Phillips hostage with them. Everything would end in a risky rescue attempt by a team of Navy SEAL snipers. The kidnapping and rescue of captain Richard Phillips soon became international news, and as usual, an adaptation to the big screen began to be developed. Taking as basis captain Phillips' own account of the kidnapping, "A Captain's Duty: Somali Pirates, Navy SEALS, and Dangerous Days at Sea", director Paul Greengrass and screenwriter Billy Ray developed a story with the intention of capturing the intense human drama of the tale. With the simple title of "Captain Phillips" and actor Tom Hanks leading the cast, this attempt isn't really bad, though it's far from amazing.

In "Captain Phillips", Tom Hanks plays the eponymous protagonist, captain Richard Phillips, who takes command of container ship MV Maersk Alabama in the port of Salalah, Oman. His destination, Mombasa, forces him to follow the dangerous route of the Somali coast, where pirate attacks are common place due to the poverty of the region. At the helm of Maersk Alabama, Phillips shows an excessive (bordering paranoid) preoccupation with security, which doesn't help him to make friends with his crew. At the same time, the young Somali pirate Abduwali Muse (Barkhad Abdi) gathers a crew of four people with the intention of capturing a big ship. Muse wishes to show his skill as a pirate, as he is usually bullied by other pirates from his tribe. On april 8, the lives of Muse and Phillips will collide when Muse's small crew manages to board the MV Maersk Alabama, making Phillips' worst nightmares a reality. Determined to protect his crew, captain Phillips will need to find the courage to face Muse and recover the control of the ship. However, things go seriously wrong when he is taken hostage by the pirates.

Written by Billy Ray (co-scriptwriter of "The Hunger Games"), the screenplay for "Captain Phillips", tries to be not only an account of captain Phillips' story, but to make a study of the relationship between two apparently different characters, captain Phillips and captain Muse. At the beginning, both captains prepare the travel of their lives, Phillips checking his ship while Muse picks up his crew amongst the somali men of his tribe. Phillips faces the mistrust of his crew, while Muse sees himself humiliated by other pirates. Finally, both captains face each other in an endurance test, with Phillips trying to manipulate Muse while the young pirate attempts to show (to his own crew and to himself) that he is the boss and has the situation under control. This focus is interesting in the sense that allows to truly get into the character of Abduwali Muse in a more human way, exploring his fears and feelings, giving him more complex dimensions than what are normally found in typical villains. This attention to the psychology of the characters is without a doubt a great virtue in Ray's screenplay, but it's not enough to sustain the weight of the film.

At the helm of "Captain Phillips" is British director Paul Greengrass, whom isn't really a stranger to make films based on tense stories from real life (as "United 93" demonstrates). In "Captain Phillips", Greengrass gives the film his familiar style based on handheld camera, which gives the movie a tone of documental realism. Cinematographer Barry Ackroyd's camera truly gets inside every scene in an almost active role, more as a participant than as mere witness of the action, managing to capture the human drama that's developed between the characters. And it's truly the difficult relationship between Phillips and Muse what actually drives the film. Greengrass and Ackroyd (who had previously worked together in "Green Zone" and the afore mentioned "United 93") capture the intensity of this relationship which is formed not only in dialogues, but in sights and silences. However, it's worth to point out that the rhythm of the movie falls flat during the second half of the film, as while Greengrass builds up the tension of the struggle between the crew and the pirates, when Phillips gets kidnapped the film loses steam. Badly.

The performances by the cast are truly the greatest asset of "Captain Phillips", as it's in the acting duel between veteran Tom Hanks and newcomer Barkhad Abdi where the real strength of Greengrass' film truly is. Hanks once again takes his classic everyman role that has given him success through his career. As Richard Phillis, Tom Hanks builds up a character different to the typical hero: he's a common man, arrogant and proud, full of flaws but with a strong determination to succeed. Tom Hanks truly manages to disappear in the character and make him real in a stark and realistic way. Young Barkhad Abdi debuts in the silver scree making a tremendous, high quality job in the role of Somali pirate Abduwali Muse. Director Pual Greengrass, fond to use actors with little to no experience, has the merit of finding and guiding a talent such as Abdi's, who truly captures not only the essence of a character as complex as Muse, but also the spirt of the Somali people, living under oppression and without great opportunities, and finds in piracy a way to survive.

As mentioned before, that's probably the greatest merit of "Captain Phillips", the achievement of building gip complex characters living in a world that's no longer black and white. The recognition of the humanity of the characters and using this recognition to make a statement: Muse is in the end, a young fisherman with dreams that seem impossible in his reality. However, this is also the origin of a big problem with the drama that "Captain Phillips" unfolds, as the film reaches a point in which the story becomes more interesting from the pirates' point of view. It's not only the fact that Abduwali Muse has been developed as a more sympathetic character than Phillips, but that ultimately the movie is the story of four young pirates facing the strongest army in the world. The matter of Phillips' survival gets overshadowed by Muse's overwhelming tragedy as a man looking for a way out that, like his dreams, is another impossible., And still, despite how fascinating these characters are, Greengrass seems to return to the traditional formula of action films during a climax that seems to remind us that these four are just the baddies and well, deserve their outcome.

Ultimately, it seems that "Captain Phillips" struggle between being two different kinds of movie: on one hand is the poignant drama that portrays a real situation exploring its characters as complex and real human beings, and on the other a tale of survival where it's clear who are the goodies (the U.S. navy of course) and the baddies. In "Captain Phillips", it seems that Greengrass started making the former and the film ended up becoming the latter. In the end, it would seem that the tense conflict between captain Richard Phillips and Abduwali Muse is diluted when the film becomes an unfair duel between four unprepared pirates and the efficient U.S. navy. While technically impeccable and with two truly brilliant performances by Hanks and Barkhdad Abdi, "Captain Phillips" lacks a bit of tact when dealing with the complex theme of Somali piracy and gets lost at sea when it attempts to solve its own identity conflict.

While I agree on the strength of the performances as one of the high points of the movie, J. Luis, unlike you I found that the central point of Greengrass story never loses steam: the confrontation between a person who is all about rules and someone who (regardless of his motives) believes he deserves the right to live outside any laws.
Yes, he is a poor, unprepared pirate against the most powerful army in the world, but what did he expect when he attacked a US ship? I think Greengrass does a terrific job of increasing the tension from the beginning of the film and especially, yes, after they leave on the lifeboat taking Phillips with them. I think what Greengrass does from that point on is show the real tragedy of these criminals: unlike Phillips, they were not prepared to face the consequences.

That's a very valid point, but I think that Greengrass gave too much importance to the U.S. Navy in the last part of the film, forgetting that confrontation that's the core of the film. I mean, I felt that the inclusion of that third element downplayed Phillips' survival and it became something more like an intelligent version of "Under Siege".