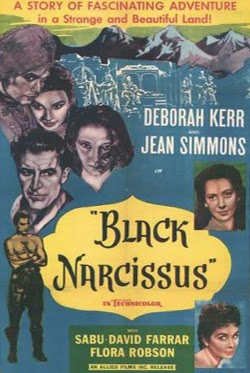 During the decades of the 1940s and 1950s, filmmakers Michael Powell and Emeric Pressburger crafted a series of films in the United Kingdom under the banner of The Archers, their production company. Working in tandem, Powell and Pressburger developed an unusual method of work in which both shared the credits of writer, producer and director, gaining a full creative liberty regarding the visual style and themes they wanted for their movies. Beginning in 1942 with "One of Our Aircraft is Missing", Powell and Pressburger quickly established a pretty unique style that would be polished with every film made by the duo. By 1946, The Archers were releasing their romantic fantasy classic "A Matter of Life and Death" and were ready to begin a new project of a significantly different nature: a psychological drama based on a 1939 novel, "Black Narcissus", written by popular British author Rumor Godden. The story, set in an isolated valley in the Himalayas, would be the perfect frame to show the mastery of cinematographer Jack Cardiff at using Technicolor. However, "Black Narcissus" is a lot more than just a beautiful photography.

As mentioned before, the story in "Black Narcissus" is set in a remote region in the Himalayas, the palace of Mopu (near Darjeeling), where a little group of five Anglican nuns must travel with the mission of establishing a convent to serve as school and hospital to the inhabitants of that remote place. Sister Clodagh (Deborah Kerr), is a young Irish nun with a strong character that has been sent to lead the mission as the superior in the convent. The other nuns in the mission include sister Philippa (Flora Robson) in charge of agriculture, the kind sister Honey (Jenny Laird) and the strong sister Briony (Judith Furse) to work as teachers and nurses, and finally sister Ruth (Kathleen Byron), who has been sick. At the convent the nuns meet Mr. Dean (David Farrar), a British agent living in the region that becomes their contact with the local government. The governor, the Old General (Esmond Knight), is happy to have the nuns opening a hospital, but soon the tensions within the walls of the convent arise, tensions that young sister Clodagh may not be ready to handle.

The screenplay, written of course by Powell and Pressburger, is a real psychological study on its characters that, living in isolation and facing a diametrically opposite culture, become an easy prey for fears and anxieties that they thought had been left in the past when they became nuns. Sister Clodagh, determined to have success with the mission, finds herself in the middle of everything, trying gallantly to handle the diverse crisis that take place in the convent, as well as her own crisis of faith, tempted by Mr. Dean's flirting words. Sister Clodagh is an extraordinarily complex character, brilliantly developed with a tempestuous sensuality that she tries to contain with the armor of her own discipline. The interesting things is that this armor is not some religious hypocrisy or an uptight moralism, but simply the desire for triumph of a woman that no longer wishes to be defeated. And while sister Clodagh could rightfully be seen as the protagonist of this story, the rest of the characters are not there just for mere support, as they truly experiment their own crisis of faith through the story.

The work of directing done by Powell and Pressburger is simply impeccable, with a superb use of the camera that enhances the tension lived within the walls of the convent at the Himalaya. Despite the fact that "Black Narcissus" was mainly shot on a studio, there's a sensation of majesty about the cultural shock lived by the Anglican nuns upon meeting the culture of India. Without a doubt this is a theme that couldn't go untouched by The Archers (specially when India's independence would become a reality within months from the film's release date), and in "Black Narcissus" the image shown is one of a rich exotic culture that marvels enormously, but still can't be tamed or understood by the sober British civilization. Something remarkable about Powell and Pressburger's film is the subtle eroticism that permeates through the film, as even when the latent sensuality is one of the most important themes in the film, this remains always contained, growing little by little as the wilderness of the environment begins to enter the lives of the nuns, only exploding in the film's powerful climax.

In a film like "Black Narcissus", based entirely in the relationships between the characters, the success depends a lot on the quality of the performances done by the cast, and fortunately, this is one of the movie's most notable aspects. Leading the cast is Deborah Kerr in the role of sister Clodagh, making one of the best jobs in her career. As mentioned before, sister Clodagh is a complex character that has not only a repressed sensuality, but also a terrible fair of failure and a strong determination. With a role full of so many facets, Kerr makes a solid and unforgettable job. Kathleen Byron, whom as sister Ruth takes the role of being a counterpart of sorts to sister Clodagh, makes the best performance in the movie as a disturbed nun with a serious emotional conflict. This is a character that easily could had ended up as the caricature of a histerical nun, but Byron manages to gift her character with great deepness in a thrilling, yet restrained performance. The acting duel between Kerr and Byron is one of the many elements that make of "Black Narcissus" a real gem.

As a whole, the rest of the cast keeps the same quality level, shining above them David Farrat as the charming Mr. Dean, and Flora Robson as the lovely sister Philippa. Also in the film appear Indian actor Sabu and a young Jean Simmons in a subplot that works more thanks to the wit of the screenplay than to their performances, as theirs are probably the worst in the film. However, those problems do not demerit in any way the quality of "Black Narcissus", film that seemed to be ahead of its time not only in terms of themes but also in the spectacular work of cinematography in Technicolor done by Jack Cardiff, that truly make the film look like no other movie of its time (with the exception of course, of "The Red Shoes", also by Cardiff for The Archers). The brilliant of the Technicolor in "Black Narcissus" isn't only the beautiful colors that Jack Cardiff puts on the film, but the highly expressive use that Powell and Pressburger give to them. Color is not just an effect devised to impress, but a complete narrative tool used to great effect in the contrast done between the plain whiteness of the nuns' uniforms and the region's colorful landscape.

Director Michael Powell once said that he considered "Black Narcissus" to be his most erotic film, and probably he was right in that statement. In the microcosm that is the convent in "Black narcissus", what is implied by glances and silences is way more important than what's actually said, and this is something that Powell and Pressburger truly understood, making of subtlety a key piece of the film. The masterful way in which the filmmakers use it in their narrative is a testament of the directors' great talent, and proof that without a doubt this duo of filmmakers earned their place in the history of British cinema. Film of great aesthetic beauty and tremendous energy, "Black Narcissus" is a movie where every element of cinematography are combined to make a masterpiece. Normally, melodrama is accused of being a populist and low brow genre, but Powell and Pressburger show in "Black Narcissus" that melodrama can be true art.