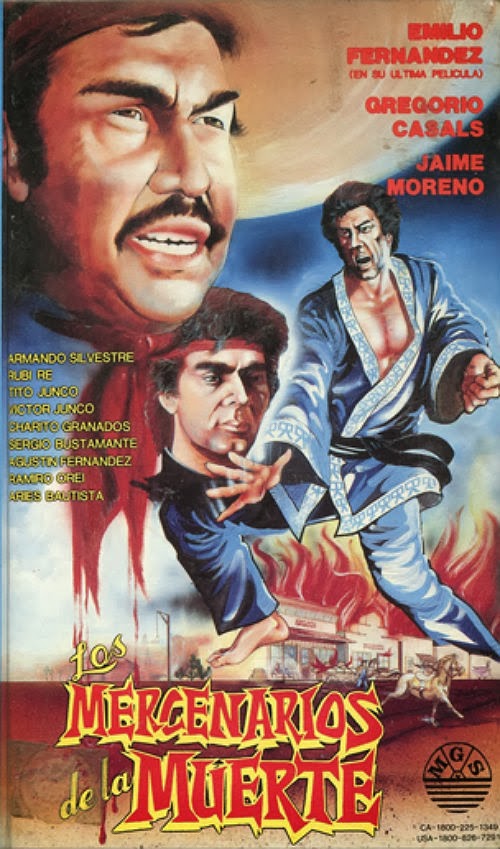 With the release in 1973 of "Enter the Dragon", the world was introduced to the great talent of martial artist Bruce Lee. His tragic death, only six days before the film's release (it would had been Lee's first film for an American studio), turned him into an icon, a real action films legend. The enormous worldwide success of "Enter the Dragon" would result in a fever for anything related to martial arts which would be reflected in the vast amount of martial arts films produced not only in Hong Kong, but in every corner of the world. Nevertheless, those attempts to get into the genre often resulted in bizarre films: in England, Hammer FIlms would produce the hybrid of gothic horror and kung fu "The Legend of the 7 Golden Vampires" in 1974, while in Spain the comedic duo of the Calatrava brothers would add their comedy to "Los Kalatava contra el imperio del karate" (1974). In Mexico, famous masked wrester Santo would star in "La furia de los karatekas" and "El Puño de la Muerte" (both released in 1982), but the wackiest mexican kung fu movie would be released the following year with the title "Mercenarios de la Muerte".

In "Mercenarios de la Muerte", the story deals with an ancient sect of asian monks belonging to the temple of Shiolang, whom after a great war against the Black Dragon sect they were forced to travel far away from their lands, to a small town in northern Mexico were they took their relics and traditions. Years went by and the monks lived peacefully in Mexico, becoming an important part of the community and establishing a martial arts school. However, at the turn of the century, a new threat appears in the horizon for the monks, as mercenary Sung Ya (Armando Silvestre), the last disciple of the Black Dragon sect, has gathered a gang of warriors from all over the world with the intention of destroying the monks in order to steal the ancient relics of their new temple. The venerable master Tata (Emilio Fernández) knows of this great danger, and asks master Jin Ho (Aries Bautista) to pick amongst the temple's most advanced students a warrior to defend the temple from Sung Ya. This mission will be given to two youngsters, Mai Ko (Gregorio Casal) and Chang Piau (Jaime Moreno), who will have to face the mercenaries of death.

As can be see give its plot line, "Mercenarios de la Muerte" (literally "Mercenaries of Death") pretends to make a mix of Westens and kung fu movies. While the idea sounds bizarre, it isn't that strange given the way that the modern martial arts film as devised by Bruce Lee and Wei Lo was very influenced by the archetypes and stories from classic Westerns (Bruce Lee's own "Meng long guo jiang" is the perfect example). The screenplay for "Mercenarios de la Muerte", written by Avinadain Bautista, not only borrows Western elements, but in fact sets its plot in a small wild west town. The story has the intention of being an epic of gran scale, with the arrival of Sung Ya forcing the monks to prepare themselves to fight for the town that gave them shelter. However, while creating this hybrid of Western and martial arts writer Avinadain Bautista opts for exploiting old cliches from both genres, diluting whatever epic was intended to be put in the film in favor of long training sequences, supposedly philosophic dialogs that doesn't say a thing, and poor saloon fights, forgetting to develop his characters' drama, leaving them as walking stereotypes.

But even if the screenplay is of a mediocre quality, the film could still have been resulted in an interesting (if odd) martial arts film if it wasn't for the disastrous work of directing from filmmakers Manuel Muñoz and Gregorio Casal. From starters it's clear that the film was lacking in terms of budget and production values, as it seems to had been shot in forgotten sets from Estudios América's old Westerns. Still, this wouldn't be too much of trouble if it wasn't for the simplistic camera set ups chosen by the filmmakers to tell their tale, set ups that only make notorious that the scenery is fake. In the same way, the craftsmanship of the figts (which should be the highlight of any kung fu movie) is deficient, not only because of the poor execution by the fighters (Aries Bautista is perhaps an exception) but also because of the way the fights are filmed, as it's impossible to cover the fighter's lack of skill and it becomes apparent that the fights are fake. The cinematography, in charge of veterans such as Fernando Colín and Ángel Bilbatua, ranges from regular to pretty bad, as the poorly lit climatic fight can exemplify, a final fight where it's hard to see what's happening.

Acting is another big negative element in "Mercenarios de la Muerte". The fact that legendary actor and director Emilio "el Indio" Fernández takes place in a project such as this one is perhaps symptomatic of the poor state in which the mexican film industry was submerged in those times. Fernández' performance as Tata (a venerable Shiolang monk unexplainably dressed as a cowboy) limits basically to recite his line with a certain severity, though at times one can see glimpses of the talent and charm of the old filmmaker. The protagonists, Jaime Moreno and Gregorio Casal, make what's probably the word job in their careers. Moreno, who is arguably the lead character, limits himself to look nice for the camera and trying to look gracefully at moving like a kung fu fighter. Casal's character is relatively more complex, but the actor is unable to establish this supposed depth and fills his act with clichés. Armando SIlvestre is probably the only cast member that understood that the only thing that could work in this debacle was to ham it up and exaggerate a half-baked impersonation of Fu Manchu.

It would be hard to find something to praise in this weird martial arts flick where incongruence and incoherence are a constant thing. And while one could put the blame for this chaos to the low budget, poor production values and mediocre script, it's actually a matter of bad directing what generates the vast majority of the film's problems. On one hand, there is not a clear definition of the space in which the story is set, so at times the temple seems to be near the town and at times it's too far from it (conveniently for the plot). As mentioned before, there isn't any care for the film's visual narrative, as if the camera had been placed in a random place without thinking about what would be on the frame. Finally, the sound design is another big problem in the film, as given the lack of sound recordings, the film is dubbed in the worst possible way: no synchronicity, no dramatic continuity, and even some actors dub characters they weren't playing at all. This can only be seen as a sign of problems during production and postproduction, and perhaps that's why there are two directors and two cinematographers credited in the film.

Despite being one of the greater disasters in mexican filmography, "Mercenarios de la Muerte" still has a bizarre charm. Maybe it's the fact that's so unusual to see a martial arts film made in Mexico, or the mixed emotions at seeing great actors of old (Fernández and the Junco siblings) getting involved in a mess like this. Maybe it's the great naiveté and ignorance that seems to have existed in the mind of the film's makers given the lack of verisimilitude the film often has. Whatever it is, the only certain is that involuntarily, "Mercenarios de la Muerte" makes for a great comedy of errors in a very surreal way. Amongst the many martial arts films done after Bruce Lee's great success (and there were quite a lot), "Mercenarios de la Muerte" is without a doubt one of the strangest of all time.