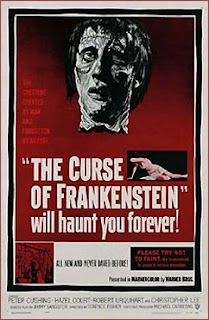 In 1934, during the boom of British cinema, businessman William Hinds, decided to enter the industry and create his own film company, "Hammer Productions Ltd.", where he would produce several movies before being forced into bankruptcy due to the end of the industry's bonanza. Along with partner Enrique Carreras, Hinds became a film distributor, but that wasn't really the end of Hammer's history, as many years later, Carreras' son James joined Hinds' son Anthony and together with their parents, resurrected Hammer Film Productions in 1949. The next two important events in Hammer's history were the hiring of director Terence Fisher in 1951, and the enormous success of 1955's horror film, "The Quatermass Xperiment", as they would play important roles the company's future. While Hammer was preparing "Quatermass 2", they gave Terence Fisher the chance to resurrect Mary Shelley's "Frankenstein", and Hammer Horror was born.

In "The Curse of Frankenstein", Peter Cushing plays Baron Victor Frankenstein, who after losing his family at a young age, hires scientist Paul Krempe (Robert Urquhart) as a mentor. Along Krempe, the young Baron develops his enormous genius for science, becoming great friends and colleagues as he grows up. During one of their experiments, they discover a way to bring a dead dog back to life, an amazing discovery that excites both scientists as it could be of enormous use for medicine. However, Victor wants to go further, and decides that the next step is the creation of life. Krempe refuses to help Victor in that experiment, but decides to stay in the house to protect Victor's cousin Elizabeth (Hazel Court), who has arrived to marry Victor, unsuspecting of her fianceé's experiments. The Baron's obsession with his experiment will prove to be more dangerous than what Krempe thinks.

The screenplay for this new version of Shelley's classic was written by Jimmy Sangster, who had previously written "X: The Unknown" for Hammer the previous year. Unlike what happens in Universal's 1931 classic adaptation, the plot is completely focused on the Baron's figure instead of on the creature, which gives a new and fresh angle to the story, as it explores Frankenstein's obsessions and how they begin to consume his life. To achieve this, Sansgter adds a lot of human drama and character development that at times makes the film more a Gothic tragedy than a typical horror film, but even when limited, Sangster's use of suspense is still pretty effective. It still isn't exactly a straight adaptation of Shelley's novel, but Sangster's screenplay does offer an interesting idea by not making the Creature a misunderstood monster, but the literal symbol of Frankenstein's failure and corruption.

Anyways, while Jimmy Sangster's screenplay is indeed worthy of recognition, it was really Terence Fisher's work as a director what ultimately gave Hammer horror it's true face. While already an experienced director by the time he made "The Curse of Frankenstein", Fisher found in Hammer's horror films the creative freedom that allowed him to explore new realms in this reinterpretations of old classics. His care for details in set design and costume design give the film a great look that equals the one of movies with bigger production values, and using vibrant colors, he puts a special emphasis on blood for the first time. There are also several sexual overtones in the film that give the movie a different style to previous incarnations of the novel, an element that Fisher would take further in posterior movies, specially in "Dracula" and "The Curse of the Werewolf".

"The Curse of Frankenstein" is also the film that introduced two of the most important actors in the horror genre since the days of Universal's movies: Peter Cushing and Christopher Lee. As Baron Frankenstein, Cushing delivers an outstanding performance that can be considered among the best in the history of the genre. Making a fascinating character out of the unsympathetic Baron is not easy, but Cushing succeeds remarkably and completely makes the movie his own. Lee has a considerably smaller role as the Creature, but while "Dracula" would be the movie where he would shine the most, here he delivers a powerful performance as the Monster. As Frankenstein's mentor, Paul Krempe, Robert Urquhart is pretty effective and makes a great counterpart to Cushing's Baron. Hazel Court is less successful as Elizabeth, although it's not really a bad performance at all.

It's hard not to think about comparing Fisher's interpretation of "Frankenstein" to the legendary movie made by James Whale 26 years before for Universal, but really, in the end it's a pointless exercise as both movies are so different from each other (and different from Shelley's novel) that there's no proper way to compare them. While one has a powerful story of a misunderstood monster (played brilliantly by Boris Karloff), the other is a tale of ambition and obsessions where the monster is nothing more than the ultimate result of Frankenstein's evil, so it's impossible to tell which one is the best of the two. What can really be said about "The Curse of Frankenstein" is that it suffers from an extremely slow pace that may turn off some viewers, although as the story unfolds, this slow pace does pay off in the end and helps to build up a perfect Gothic atmosphere.

An enormously successful film, "The Curse of Frankenstein" began the style of Gothic horror that would later be labeled as "Hammer Horror". With Fisher at the helm, Hammer would become a great influence in how the genre was developed through the 60s, giving it new life and pushing the boundaries of the era. While maybe overshadowed by Fisher's posterior masterpieces, "The Curse of Frankenstein" is still one of the best tales of Gothic horror that have appeared on the silver screen.