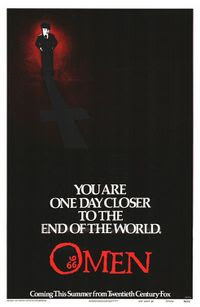 As the dominant faiths of the Western hemisphere, the Abrahamic religions (mainly Christianity and Judaism) have played an important role as source of inspiration for many art forms through the centuries. In the narrative arts, they have inspired all kinds of stories, as their cosmology is so complex that can be used in almost everything, from moral fables to epic tales. Obviously, they have also inspired many horror stories, mainly because the three have a definitive personification of evil in the figure of the Devil, which makes an excellent villainous character due to its many different traits. Naturally, the Devil and its followers have been villains in horror films since almost the beginnings of cinema, however, it was during the decades of the 60s and 70s when three of the most influential horror movies about the Devil were made: "Rosemary's Baby", "The Exorcist", and "The Omen".

"The Omen" begins in Rome on June 6, 1966, when American ambassador Robert Thorn (Gregory Peck) receives the news that his new son has been stillborn. Devastated by the news, Thorn worries about how will this affect his wife Katherine (Lee Remick), so when he is offered the chance to adopt a newborn baby whose mother died giving birth to him, he accepts and decides not to tell a word to his wife. Years go by and everything seems happy for the Thorn family, with Robert quickly ascending in the political arena while his son, named Damien (Harvey Stephens) grows up apparently normally. However, on Damien's fifth birthday, his young Nanny (Holly Palance) hangs herself mysteriously in front of everyone. This will be only the first of many strange events surrounding Damien, making Robert begin to suspect that there's something unnatural in his son.

Written by David Seltzer, "The Omen" mixes drama, horror and suspense by mixing cleverly an apocalyptic theme with a concept that was very popular in horror stories during the 60s and the 70s: the "evil child". While obviously inspired by the success of "The Exorcist" and "Rosemary's Baby", Seltzer gives to his story a new angle closer in spirit to movies like "Village of the Damned", as in "The Omen", the kid is not a victim or a tool of the supernatural evil, but truly the embodiment of evil. Due to this, Seltzer wisely bases most of the movie's drama around the dilemma that consumes Damien's father, who can't help but see innocence in his beloved son, as well as in the consequences of his doubts and his search for answers. This serious approach, together with strong character development, give the film a powerful sense of realism, which in turn truly makes it a haunting experience.

With "The Omen", director Richard Donner had the first major success of his career, and it's not difficult to see why, as while Seltzer's script is truly inspired, credit should go to Donner as the man responsible for "The Omen"'s overall style. Knowing that the strength of the script lays in the realism of its human drama, Donner keeps a restrained style in "The Omen", and handles the supernatural themes with a subtle elegance that helps to create a haunting atmosphere of dread that fits nicely within the apocalyptic theme of the film. While all we see is a little child, Donner skillful use of Gilbert Taylor's cinematography and the eerie score by Jerry Goldsmith, makes it seem as if it was truly the beginning of the end of the world. Donner's directing of his cast also plays an instrumental role in this, as he brings out strong and realistic performances out of them.

Leading the cast is Gregory Peck, delivering a terrific performance as U.S. ambassador Robert Thorn, the unsuspecting adoptive father of the Antichrist. As usual, Peck gives his character a lot of humanity, as well as his commanding presence. While Peck is initially a bit wooden in his performance, this kind of fits nicely in his role as an upcoming politician who must take the most difficult decision a father has to face. As Thorne's wife Katherine, Lee Remick is equally as effective as Peck, playing Damien's troubled mother with great realism. However, it is Billie Whitelaw who steals the movie as the sinister Mrs. Baylock, Damien's new nanny who is completely willing to do whatever is necessary to help Damien to rule the world. Whitelaw's performance is truly haunting, and while a bit over-the-top at times, she portrays one of the best horror villains of the 70s.

It's pretty easy to criticize the many inconsistencies between the movie and the biblical sources that inspired its main plot, however, to label the film as pretentious or inaccurate in its portrayal of Christian imagery would be pretty ignorant and ultimately pointless, as "The Omen" never intends to be a representation of any biblical story or theological prophecy, as it's only a fictional tale of horror and suspense inspired by them. What truly can be criticized about the film are the small but numerous plot holes that appear from time to time through the film, certainly minor yet noticeable problems that could had been easily avoided with a bit more of care in the development of the script. The movie's extremely slow pace doesn't help in this, as while it allows Donner more development for his characters, it also makes the movie be a bit boring at times.

It's difficult not to compare this movie to "Rosemary's Baby" and "The Exorcist", as the fact that "The Omen" was obviously inspired by those two masterpieces of horror is hard to ignore. But even when it may come as inferior when compared to those classics, "The Omen" still is one of the best horror films produced by a major studio during the 70s, thanks in part to the classy style Donner added to the film. It's true that "The Omen" hasn't aged well, but more than 30 years after its release, it remains a powerful and haunting experience.

I remember this film scaring me almost to the point of insanity as a kid! Always had a thing for the devil in movies. Scares me more than anything else!

Never seen the film, but now you got me hooked. The next time it's on TV, I'll be sure to check it out.

Check it out Marin, I really hope you won't be dissapointed :D