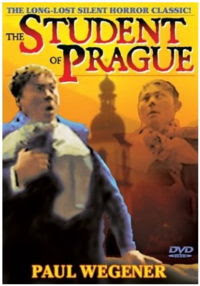 One of the most important artistic movements in the history of cinema was without a doubt German expressionism, the highly atmospheric style of film-making developed during the 20s in Berlin. Classic movies like "Das Cabinet Des Dr. Caligari." (1920) and "Nosferatu, Eine Symphonie Des Grauens" (1922) were the most famous direct results of this movement, and while the movement didn't have a long life, its enormous influence over cinema can still be felt today, specially in the horror genre. One of the key figures of this style would be director Paul Wegener, director of 1920's "Der Golem, Wie Er in die Welt Kam", as in his debut as a filmmaker, seven years before the making of that classic, he was already making experiments with expressionism in film. That early prototype of German expressionism was incidentally, another horror film: "Der Student Von Prag".

"Der Student Von Prag" ("The Student of Prague"), is the story of Balduin (Paul Wegener), a student with the reputation of being the best fencer in Prague, but who always find himself with financial troubles. One day, Balduin rescues the beautiful countess Margit (Grete Berger) from drowning in a lake after her horse drop her by accident. Balduin falls immediately in love with her and tries to see her again, but soon he discovers that he'll have to compete with her rich cousin, Graf Von Schwarzenberg (Lothar Körner), who also wants to marry her. Knowing that he can't offer her much, Balduin wishes to be wealthy, and this is where a sorcerer named Scapinelli (John Gottowt) enters the scene. Scapinelli offers Balduin infinite wealth in exchange of whatever he finds in his room. Balduin accepts the proposal, only to discover in horror that what Scapinelli wants is his reflection in the mirror.

Loosely inspired by Edgar Allan Poe's short story "William Wilson" and the classic legend of "Faust", the story of "Der Student Von Prag" was conceived by German writer Hanns Heinz Ewers, a master of horror literature and one of the first writers to consider scriptwriting as valid as any other form of literature. Written at a time where cinema in Germany was still being developed as an art form, "Der Student Von Prag" shows a real willingness to actually use cinema to tell a fully developed story beyond a camera trick or a series of scenes. Like most of the scriptwriters of his time, Ewers screenplay is still very influenced by theater, although "Der Student Von Prag" begins to move away from that style. While a bit poor on its character development (specially on the supporting characters), Ewers manages to create an interesting and complex protagonist in the person of Balduin.

While "Der Student Von Prag" was Paul Wegener's directorial debut and Stellan Rye's second film as a filmmaker, it's very clear that these two pioneers had a very good idea of what cinema could do when done properly. Giving great use to Guido Seeber's cinematography, the two young filmmakers create a powerful Gothic atmosphere that forecasts what the German filmmakers of the following decade would do. Wegener would learn many of the techniques he would employ in his "Golem" series from Seeber and Rye. Despite having very limited resources, Rye and Wegener manage to create an amazing and very convincing (for its time) visual effect for the scenes with Balduin's reflection (played by Wegener too). Already an experienced stage actor at the time of making this film, Wegener directs the cast with great talent and also attempts to move away from the stagy style of previous filmmakers.

As Balduin, Paul Wegener is very effective and probably the best in the movie. It certainly helps that his character is the only one fully developed by the writer, but one can't deny that Wegener was very good in his role as the poor student who loses more than his mirror reflection in that contract. John Gottowt plays the sinister Scapinelli with mysterious aura that suits the character like a glove. Few is said about Scapinelli in the film, but Gottowt makes sure to let us know that he is a force to be feared. The rest of the main cast is less lucky, with Grete Berger being pretty much average as countess Margit, and Lothar Körner making a poor Graf Von Schwarzenberg. However, it must be said that Lyda Salmonova was pretty good in her expressive character and Fritz Weidemann made an excellent Baron Waldis-Schwarzenberg, showing the dignity that Lörner's character should have had.

Considering the movies that were being done in those years in other countries and the fact that its remake (made 13 years after this film) is superior in every possible way, it's not difficult to understand why "Der Student Von Prag" hasn't stood the test of time as well as other early films. The movie's main problem is definitely its extremely low budget, as it resulted in the film being considerably shorter than what Ewers' story needed to be fully developed. This makes the plot feel a bit too vague at times, or even incomplete, as if there was something missing in the narrative (of course, there's also the possibility that the existing print is really incomplete). However, "Der Student Von Prag" is a very interesting early attempt at a complex tale of horror and suspense in film that, while inferior to what other filmmakers were doing at the time, left a powerful impression in history.

As the direct predecessor of the German expressionist movement, it's hard to deny the enormous importance that "Der Student Von Prag" has in the history of German cinema, probably in the history of cinema in general. It may look dated even for its time, but considering the limited resources its director had, it's truly better than most films from that era. As the movie that started Paul Wegener's career, and with that German expressionism, "Der Student Von Prag" is a must see for everyone interested in this slice of film history.

Rivera, where do you dig up all these old films? I thought I was a movie buff, but you really have knowledge of some of to me unknown films. I never heard about this "Student Von Prag" - and that from a guy who saw "Caligari", "Nosferatu", "Nibelungs" and others...

Hi Marin. Thanks for your kind words. "Student" was actually recommended to me by a good friend at IMDB's Horror Board.

By the way, I got "Student" from Amazon, although you can get it cheaper at www.oldies.com. You can find this one there and its remake.