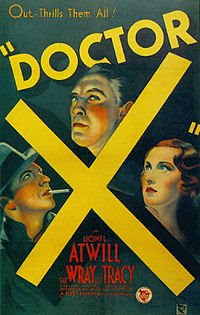 By the late 20s, Warner Brothers had already become a major studio thanks to the enormous success of their revolutionary "talking pictures", finally delivering fully synchronized sound and dialogs that could be heard. Soon after this, Warner moved to color as their new novelty, and using the advanced Technicolor Process 3 (which allowed a better use of their two color technology), the studio released a wide variety of films that looked better than the previous Technicolor films, creating a new revolution of almost the same impact as the creation of the "talkies". Among those films was the 1932 tale of horror and mystery, "Doctor X", directed by Michael Curtiz, who in those years was still one of the many studio directors at Warner. Mainly known for his effective (always on time and under budget) and versatile work, this would become the film that proved that this Hungarian immigrant had a style of his own and was able to make films of great success.

There is a serial killer on the loose in New York, committing his cannibalistic murders using a scalpel with surgical precision, and always under the light of the full moon, earning the moniker of "The Moon Killer". While the police still has no idea of who the killer is, they know one important thing about him: the killer works as a scientist at the Academy of Surgical Research. The Academy's director, Dr. Jerry Xavier (Lionel Atwill), decides that in order to avoid any bad reputation for the Academy, he must find who the killer is among the suspects, and asks the Police Commisoner for time to carry on an experiment. Gathering his four comrades in his old mansion, Xavier will try to discover the identity of the killer, as anyone could be the murderer, including himself. At the same time, a wisecracking reporter named Lee (Lee Tracy) finds himself trying to discover what's the mystery at Xavier's Mansion.

The screenplay for "Doctor X" was written by Robert Tasker and Earl Baldwin as an adaptation of a moderately successful three-act play by Howard W. Comstock and Allen C. Miller. The story remained faithful to the mix of mystery, comedy and horror that was popular in that kind of plays, but Tasker and Baldwin enhanced the horror elements of the story, clearly in an attempt to equal the success of Universal's horror movies. While the plot is indeed more focused on horror (including detailed, although not graphic, descriptions of rape and cannibalism), the story remains true to its origins as a play with the inclusion of lighthearted comedy in the shape of Lee, the wisecracking reporter, whose comedic exploits serve to break the tension at several points of the film. While nothing really amazing by today's standards, the story still works very well, with some cleverly written twists and unexpected surprises that spice up the plot.

While the plot sounds definitely like another of those "old dark house" thrillers that were so popular in the 30s, the execution of the film is what truly sets it apart from the rest. For starters, Warner Bros' decision of making "Doctor X" part of their series of Technicolor films allowed director Curtiz to be able to work with the now legendary cinematographer Ray Rennahan, and together they crafted very atmospheric images of haunting beauty. Rennahan's skills with color cinematography works perfectly together with Curtiz' expressionist background in the making of a fast-packed, yet beautifully looking story. As a director, Curtiz was still far from becoming the master who directed "Casablanca", but his classy style can already be seen raw in this movie.

Another of the high points in the film is the casting, starting with Lionel Atwill as Dr. Xavier. Atwill delivers a terrific performance, completely owning his character and giving it a subtle feeling of impeding doom, adding a lot of emotion to the film. Fay Wray is also very good, although like Lee Taylor, doesn't really have anything to do besides playing a stereotype. Preston Foster, John Wray, Harry Beresford and Edmund Carewe are pleasant surprises, each giving their own quirky character a distinct look, and like Atwill, make very believable suspects of the heinous crimes. Finally, George Rosener and Leila Bennett have small, yet very funny scenes that add a lot to the black comedy aspect of the film, and personally, I found them infinitely better than Fay Wray and Lee Tracy.

"Doctor X" is a film that has aged badly, showing a style of mystery stories that is not popular anymore after countless of imitations and variations on the same subject. Lee Tracy's comedic performance is also another of the film's details that nowadays look silly and out of place ( Glenda Farrell would do a better work in a similar role in "Mystery of the Wax Museum", the following year), although then again, this kind of over-the-top performances were the standard of comedy/horrors of those years. It is clear that "Doctor X" is definitely not a classic of the genre in the sense of being innovative or groundbreaking, however, I think that the superb execution of the whole film really sets it apart from the rest, and gives it a special charm that it's hard to ignore.

It's safe to say that this movie pales in comparison to some of the best Universal's horrors of those years, and that the cast and crew of this film surpassed themselves the following year with "Mystery of the Wax Museum", completely overshadowing this film; however, "Doctor X" is an enjoyable movie that shows the days of experimentation with color, and the style of horror of the years prior to the Hays Code. While not a life changing experience, "Doctor X" is a perfect film for a dark atmospheric night, where its haunting colors can shine the most.