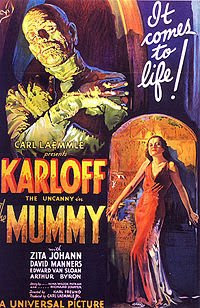 1931 was truly a significant year for the horror genre, as the release of Universal Studios' classics "Dracula" and "Frankenstein" marked the genre's triumphant entrance to the sound era, and the birth of modern American Horror cinema. While those movies weren't the first American horror "talkies" (Universal's own "The Cat Creeps" was released on 1930), they were the ones that started the "horror boom" of the decade and what's known today as the "Golden Age of Horror". On the wake of this tremendous success, and inspired by the rumors of a supposed "Curse" that surrounded the discovery of Tutankhamun's tomb (in 1922), producer Carl Laemmle Jr. decided to make Universal's next horror hit an Egyptian-themed one. Such was the genesis of 1932's "The Mummy", film that not only would continue Universal's string of horror classics, but also finish to establish Boris Karloff's name as a horror icon and mark the debut as a director of legendary cinematographer Karl Freund.

"The Mummy" begins in 1921 with the discovery of an ancient tomb by an archaeological expedition led by Sir Joseph Whemple (Arthur Byron). In the tomb, they find the mummy of a powerful priest, Imhotep (Boris Karloff), as well as a mysterious scroll. Unaware that the scroll contains an ancient spell able to resurrect the dead, young archaeologist Ralph Norton (Bramwell Fletcher) reads the scroll, bringing the powerful Imhotep back to life, an event that drives Norton insane. Ten years later, Sir Joseph Whemple and his son Frank (David Manners) return to Egypt, hoping to find the tomb of Princess Anck-es-en-Amon this time. With the help of a mysterious man named Ardath Bey, the archaeologists find the tomb, but Bey is actually Imhotep, whose interest in helping the Whemples came from his desire to find his forbidden long lost love, the Princess. However, the revived priest will be surprised when he meets Helen Grosvenor (Zita Johann), a young woman who seems to be tied to Anck-es-en-Amon in some form.

Writers Richard Shayer and Nina Wilox Putnam had the mission of developing the Egyptan-themed horror film, however, their inspiration came not from Egypt, but from the rumors and tales about occultist Alessandro Cagliostro, from which they developed the film's story. John L. Baldeston, who wrote the screenplay, would be the one whom added the Egyptian theme Laemmle desired. "The Mummy" rehashes several key themes of Browning's "Dracula" (also written by Baldeston), mainly the romantic triangle between a young couple and an ancient supernatural figure, however, this theme receives a considerably different focus by the amount of humanity present in the character of Imhotep (when compared to the predatory Transilvanian count), making him a complex, almost tragic figure in spite of being a powerful villain. This complexity, together with the way the Mummy is developed as an ever present supernatural force of evil (unlike the shambling, silent undead servant of posterior Mummy films) makes Imhotep one of the best written villains in 30s horror cinema.

Despite being hired to direct the film only two days before filming started (and also being his first job as a director), Karl Freund makes a more than competent job in putting the whole thing together, bringing the story to life with a powerful, visually stunning style very much in tone with the atmospheric touch of mysticism the story exudes. Being a cinematographer himself (in classics such as "Der Letzte Mann", "Metropolis" and "Dracula"), it's not a surprise that Freund had put to excellent use the work of cinematographer Charles J. Stumar, giving "The Mummy" a highly atmospheric look that brings back memories of the German Expressonist movement of the 20s (in which Freund played a big role). However, this look is not only played for an atmosphere of dread, but also to enhance the surreal dark fantasy elements of mysticism that are at hand in the story, completing the feeling of constant menace that Karloff's Imhotep brings to the screen. While Freund's personality clashed with his cast, it's commendable the fact that he managed to bring great performances out of them.

The acting through the film is for the most part of great quality, with the cast doing a very effective job in their respective roles. Horror icon Boris Karloff is simply outstanding as the ancient Imhotep, a role that finally allowed him to showcase his talent for horror in a speaking role (his previous characters in the genre had been silent). Filling the screen with a powerful commanding presence, Karloff is frighteningly believable as the 3700 years old mummy, willing to do whatever is necessary to be reunited with the love of his life. If Lugosi's eyes in "Dracula" are the ones of a primal, animal-like evil force of nature, Karloff's eyes transmit the sharp intelligence of a centuries old evil mastermind. Opposing Imhotep is Edward Van Sloan as Doctor Muller, who comes to aide the Whemples in their fight against Imhotep. Van Sloan is truly in his environment, once again playing the wise man of science determined to face the occult without skepticism. The beautiful Zita Johann is wonderful as Helen Grosvenor, and makes her character to be more than a mere damsel in distress.

In fact, the only weak link in the cast comes in David Manners' somewhat bland performance as Frank Whemple, as Manners is not only easily overshadowed by his fellow cast-mates, but also at times his character's personality becomes a tad annoying, showcasing an attitude that seems out of place in the film (although this last thing may also be the writers' fault). Still, the film's only real problem is, in my personal opinion, the way the last half of the movie becomes too close to be a complete rehash of Browning's "Dracula" for its own good. While "The Mummy" offers a completely different kind of mystique, a more surreal mood and a humanity not seen in Browning's film, the twists and turns the plot has in its final part feel almost like a carbon copy, making the film lose some steam by the time it reaches its climax. The fact that Van Sloan and Manners play essentially the same characters they did in the 1931's classic do nothing but to enhance this feeling of watching a remake of "Dracula" with an Egyptian setting.

But still, that's just probably a minor complain, as while both films are indeed very similar in their plots (and cast), they are also very different in terms of how the concept is developed, and truly the enormous differences between Lugosi's Dracula and Karloff's Imhotep (I wouldn't say one is better than the other, let's leave it at "different") are more than enough to make those movies completely different experiences. Director Karl Freund wouldn't enjoy a long career as a director, not because a lack of talent, but because cinematography seemed to be his true love (and he developed huge improvements in that department). Fortunately, before retiring he managed to deliver another masterpiece of horror: 1935's "Mad Love". While probably of lesser impact than Tod Browning's "Dracula" and James Whale's "Frankenstein, Karl Freund's film is definitely in the same league as those two classics of the genre.

I think it was a good film. Not that great, really, but still a fine film. Cheers.