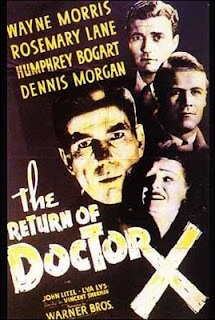 Legendary actor Humphrey Bogart is probably one of the most important figures in the history of American cinema, thanks to his unforgettable performances during the 1940s and 1950s in classics like "Casablanca" (1942), "The Maltese Falcon" (1941) and "The African Queen" (1951), movies that took him to the level of superstar as well as transforming him into an icon of the Film Noir genre of those years. However, success wasn't easy for Bogie, as he spent almost the first decade of his film career playing gangsters and cowboys in low-budget movies. As another of Warner Brothers' stock actors, Bogart had to play whatever the studio wanted him to play, and it was in this way when one of the most interesting oddities in Bogart career happened: he was hired to play a villain in a horror movie, "The Return of Doctor X", a b-movie slated as a sequel to 1932 hit "Doctor X".

In this movie, Wayne Morris plays Walter "Wichita" Garrett, a young reporter recently arrived to New York, who is of course looking for the big note that will make him a regular in the newspaper where he works. Finally he gets an interview with the famous theater actress Angela Merrova (Lya Lys), but when he goes to he apartment in order to interview her, he finds her dead. Strange things begin to happen as the corpse disappears before the cops arrive, and even weirder: Angela Merrova appears alive, making Garrett look like a madman. Without a job, Garrett decides to investigate how is possible that Merrova is still alive, and makes a visit to his friend Dr. Rhodes (Dennis Morgan) looking for answers. Together, Rhodes and Garrett will discover the terrible secret behind Merrova's apparent resurrection and the identity of the man behind it.

While it was presented as a sequel, "The Return of Doctor X" is a completely different story that has absolutely nothing to do with the firs movie, as it is in fact, based on William J. Makin's novel "The Doctor's Secret". Written by Lee Katz, the story has the same pattern typical of mystery and horror films of the 30s (which incidentally, "Doctor X" follows too to a certain extent), with a wisecracking reporter trying to solve a case of serial murders; however, in this film the horror elements are toned down in favor of the mystery. The film flows in a very straight forward way, and while there are some interesting additions (the ending has a slight Noir touch), it doesn't move too far away from the typical formula. However, this is the lesser of the script's problems, but more on that later.

Another oddity of this film is that it was the modest debut as a director of Vincent Sherman, who would become a respected director of melodramas in the 40s, and TV series during the 70s. In this his first film, Sherman's skill to direct actors is already evident, although still in a raw form. An actor himself, Sherman is naturally able to bring the best from his cast, and seems specially keen to allow actors Humphrey Bogart and John Litel to show off their talents in the movie. Of course, this is not a masterpiece and Sherman basically makes his movie a tale of murder and mystery by the book; however, it is notable how entertaining the final result is, specially considering the really flawed script he had to work with.

As written above, the acting is very good for a b-movie of its time, with Wayne Morris delivering a very effective performance as "Wichita" Garrett. His very natural presence allows him to make the character work, even at the sillier parts of the script. Dennis Morgan is also quite good, although a bit too melodramatic for his own good. Rosemary Lane plays Dr. Rhodes' love interest, although her character doesn't really have a lot to do in the story. John Litel delivers a wonderful performance as Dr. Flegg, and along Bogart, is one of the highlights of the movie. Finally, it is legendary how Bogie hated to play Dr. Marshall Quesne in this film, but despite he badmouthing this movie, his performance is truly remarkable. This quirky, wicked and bizarre character manage to become very real thanks to Bogart's professional acting.

Sadly, this is not one of the best examples of this style of horror movies, and not because the mystery is easy to figure out (a common trait in films like this), but because the plot's beginning is so poorly constructed that it requires a bit more than the usual amount of suspension of disbelief to accept the event that starts the film (the disappearance of the corpse being unnoticed is a major plot hole). I don't know if this problem was present in the original novel, but it really damages the development of the script. Still, to Kantz' credit, I must say that he manages to make the story work after this awful start and by the ending it really has turned into something better.

Of course, the main attraction of "The Return of Doctor X" is still to see Humphrey Bogart in a rare role as a horror movie villain, however, and despite the many problems with the script, I think that the film has more to its favor than just an against type performance by Bogie. I feel it truly captures the essence of pulp novels of its time, and works almost as a bridge between the 30s Gothic horror and the 40s era of Film Noir. It is not a very good movie, but fans of Bogie won't like to miss it.

I pride myself in having watched all the films you review here, but lately you've been getting really obscure on me, heh.

Another well laid out and thoughtful review. Can't wait to check these two out.

Keep up the good work!

It’s great to see good information being shared and also to see fresh, creative ideas that have never been done before.