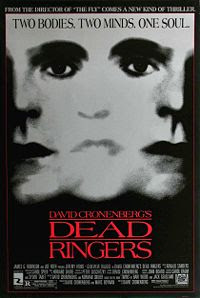 A few months ago I mentioned Cult Reviews, a young site that, as it's name indicates, it's completely devoted to cult films. Recently it had a major design update, and while slowly, it's stll growing. So, in a new collaboration to Cult Reviews, I made a review for one of my favourite films by David Cronenberg (whom is also one of my favourite filmmakers), 1988's "Dead Ringers". The tale of two identical twins who seem to live as one person, "Dead Ringers" is a fascinating movie that, in my opinion, represents the shift Cronenberg made from visceral body horror to subtler psychological horror of his posterior films.

In the past I have posted there reviews for the british classic from the 30s "The Face at the Window", Richard Stanley's masterpiece "Dust Devil", and Alex De la Iglesia wild black comedy "El Día de la Bestia". Some of the more recent reviews there are the one for Ivan Nagy's "Skinner" (1993) and Robert Madero's "Camp Utopia" (2002), and while not as recent, dear friend Mark's (known as Hieronymos Grost) great review for Pasolini's "Salò o le 120 giornate di Sodoma" is a nice reading, specially since Criterion just released a new DVD for it.