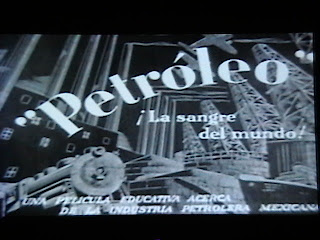 During the first half of the 30s, the situation between oil companies and their workers in Mexico was extremely conflictive, often resulting in strikes, and sometimes even violence. The origin of the tensions between both groups was that the workers demanded better working conditions and basically a whole new collective contract to rule their relationship with the companies. On the other hand, the companies weren't really excited about this and claimed to lack the funding necessary to satisfy those demands. Naturally, public opinion was initially divided on the subject, however, eventually both the Government and the population began to be on the workers' side. In order to fight this, in 1936 the oil companies decided to fund a short educational film as propaganda for their cause, hoping to win back the public's favor as the defenders of Mexican industry. And to make this film they hired the crew responsible of Mexico's biggest box office hit of the year: "Allá en el Rancho Grande".

The result was "Petróleo - La Sangre del Mundo" (literally "Petroleum - The Blood of the World"), a 19 minutes short film that covers the the historical importance of oil and its products in the industrial development of a country. Written by Antonio Momplet and co-directors Arturo S. Mom and Fernando De Fuentes, "Petróleo" is very informative about the whole process of extraction of crude oil and the treatment it gets to produce the rest of its derivatives. However, being a work done with the intention of promoting the role the big oil companies play in the industry, it's origins as propaganda are more than obvious as it spends a lot of time explaining how necessary the companies are for the future of the nation. Granted, the companies had a point in the sense that their technology, funds and experience were invaluable at that moment, but the narration certainly tends to exaggerate their role. However, what's odd about "Petróleo - La Sangre del Mundo", is that despite this, the movie conveys exactly the opposite message.

And that happens because of the way words and images work in the film. As written above, "Petróleo" was directed by Arturo S. Mom and Fernando De Fuentes, whom using the beautiful camera-work by Adolfo W. Slazy, Manuel Álvarez Bravo (later known as one of Mexico's greatest photographers) and Gabriel Figueroa, were in charge of putting images to the words of the oil companies. Now, the oddity in "Petróleo" is that while the narrative talks about the benefits of the companies, the images captured tend to showcase the work of the workers, the common people, putting special emphasis in the nobility of their work, the strength of their collective effort, and the difficulties they have to overcome to produce the "blood of the world". In a purely visual way, "Petróleo" has more in common with the soviet propaganda done by Eisenstein and other Russian filmmakers than with the normal educational shorts about scientific themes. Needless to say, the images in "Petróleo - La Sangre del Mundo" speak more than the film's screenplay.

This contrast between images and words is so carefully organized that it just couldn't be mere coincidence, as it is in fact a cleverly devised blow against the oil companies in which, using their own film, the filmmakers effectively did propaganda for the opposite side. In his memoirs, legendary cinematographer Gabriel Figueroa (a convinced socialist) claims full credit of the deed, detailing how by being familiar with the way Álvarez Bravo and De Fuentes worked, he was able to work his ideas into the film without nobody noticing it. While I don't doubt that Figueroa was the mastermind behind it all, I imagine that he must have had the collaboration of De Fuentes, Álvarez Bravo or at least editors Carles L. Kimball or Ulrico Stern, as "Petróleo"'s overtly socialist tone is so subtle and yet so powerful that it just feels like the result of a collaborative work. As expected from the talented set of cinematographers, the images of "Petróleo" are, while probably generic, of great quality and even have a certain beauty.

In the end, the fight between the companies and the workers ended in 1938, when on March the 18th the Government of president Lázaro Cárdenas expropriated the petroleum industry. The workers' movement became very popular amongst the population, so even when its probable that "Petróleo" had not been a key factor in that, it could be said that the ideas of Figueroa and company won in the end. Still, while "Petróleo - La Sangre del Mundo" is nothing more than an educational short film (filled with the genre's typical problems, like a terribly dull narration, I must add), the way its images are in a constant fight with the whole film's idea make it a very interesting movie to watch. Given the way things ended, "Petróleo" may not had been the most successful documentary, but as the perfect display of the power of images, it's outstanding.

Hi, I work for a company that has created a simple social commerce solution, and we’re hoping to reach non-profit professionals who are looking for creative ways to raise money online. In just five minutes, your organization can set up your own personal storefront and choose from thousands of products to recommend and sell. Anytime someone buys something off your Lodge, your organization gets 10% of the sale.

It’s a great way to mobilize donors because you make money every time they purchase products off your marketLodge! It’s easy to set up a Lodge and display it wherever you go online—set up a widget for your website or blog, or include a link to your Lodge in your email newsletters.