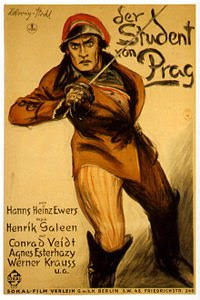 Without the shadow of a doubt, the German expressionism was one of most important artistic movements of the twentieth century, specially for cinema, as it was on the rising film industry where it left its deeper impact. With its stylish art direction and highly atmospheric cinematography, German expressionism revolutionized cinema in many ways, thanks to the work of very talented people like Fritz Lang, F.W. Murnau, Karl Freund and Hermann Warmand. Right at the center of the movement was Czech actor and director Henrik Galeen, whom after directing (along Paul Wegener) one of the movement's earlier examples ("Der Golem" in 1915), dedicated most of his career to the writing of screenplays for several of its greater glories (Murnau's "Nosferatu, Eine Symphonie Des Grauens" for example). In 1926, Galeen returned to directing, recruiting several famous names (Günther Krampf and the aforementioned Warmand, among others) in order to remake Paul Wegener's first movie: 1913's "Der Student Von Prag".

In "Der Student Von Prag" ("The Student of Prague"), Conrad Veidt plays Balduin, a young student always troubled by his constant lack of money (which he thinks prevents him from fulfilling his big ambitions), but who has built himself a reputation as the best fencer in all Prague. One day he comes across an odd man who calls himself Scapinelli (Werner Krauss), who finds out about his ambitions of wealth and love. But Scapinelli isn't a normal man, so while Balduin and other students are spending the time at the countryside, Scapinelli uses his powers to make Countess Margit's (Agnes Esterhazy) horse to go crazy. Balduin notices the danger and saves the Countess, falling in love with her in the process. Unfortunately, she is going to marry her cousin, Baron Waldis-Schwarzenberg (Ferdinand Von Alten), so Balduin really doesn't have a chance against him. It is at this moment when Scapinelli reappears, and promises Balduin infinite wealth and the Countess' heart. But everything comes with a price.

The original film was written by Hanns Heinz Ewers as a horror version of Edgar Allan Poe's short story "William Wilson" with the addition of a certain Faustian touch. Written by director Galeen himself, this remake follows very closely the original storyline, but adds a lot more of character development, something that was sorely missed in the original (technology and budget weren't on the filmmakers' side, so the original's runtime was extremely short) and that's truly an improvement over it. This addition makes the story a lot more compelling, as Galeen takes time not only to explore the horrible consequences of Balduin's pact with Scapinelli and the loss of his reflection in the mirror, but also his personal decadence and paradoxical loneliness as wealthy man, and how this sudden change of luck doesn't bring the happiness he expected and begins to transform the ambitious young fencer. It probably sounds clichéd and overtly moralist now, but Galeen handles his topic with a great elegance akin to Gothic horror.

One of the most remarkable things about the 1926 version of "Der Student Von Prag" is definitely the cinematography by Günther Krampf (and an uncredited Erich Nitzschmann), which possess a haunting beauty that suits perfectly the melancholic, tragic mood the story has. Directoy Galeen gives great use to the cinematographer's work, creating a very dynamic film that moves away from the usual staginess of silent films thanks to his excellent camera-work and the fluid pace in which the story unfolds. While less stylish (and a lot more naturalistic) than the most representative films of German expressionism, Galeen's movie still follows many of the conventions of the movement, and in fact uses it to showcase the changes in Balduin's life: the warm, yet melancholic scenes of nature for Balduin's previous life in contrast with the cold and oppressive designs of his house when he becomes wealthy. Despite being less visually striking than other German films from the same period, Galeen and Krampf give it a style of its own.

One of the most interesting things in "Der Student Von Prag" is to see reunited the two main stars of 1920's "Das Cabinet Des Dr. Caligari": Conrad Veidt and Werner Krauss. Veidt is definitely the highlight of the film, as his performance as the taciturn Balduin is excellent and an example of perfect casting. He truly transmits the melancholy and bitterness of the young fencer blinded by ambition, and in a couple of scenes he also showcases nice skills at fencing (though it's true that editing helps him a lot). As the mysterious Scapinelli, Werner Krauss is quite effective, although perhaps a bit hammy. Still, this isn't really a bad thing, since he relays mainly on his powerful screen presence to portray the maleficent sorcerer. Romanian actress Elizza La Porta is a nice surprise (it was apparently her first film), as her performance is quite fresh and adds a light touch to the dark melodrama. Agnes Esterhazy isn't as lucky, although while probably mediocre, her performance isn't that bad.

Since the first version of "Der Student Von Prag" has the historical importance of being not only a prototype of German Expressionism, but also one of Germany's first horror films and Paul Wegener's debut as a director, it tends to easily overshadow its more polished remake, something that I consider a bit unfair, as in my personal opinion, I consider it the superior version of the two. As written above, it's the cinematography what sets the film apart, as it features several great scenes that demonstrate that Galeen and crew had a very good understanding of the possibilities of cinema. One of those scenes is when Scapinelli uses his powers to drive the horses crazy, as using Krampf's cinematography and editing to enhance Krauss' performance, Galeen creates a quite poetic and macabre moment of great suspense and strange beauty. Unfortunately, the film is not without its problems, the main of those being that the film has several scenes where the fast pace suddenly stops and the story begins to drag a bit.

Overshadowed by its historically important predecessor and by the fact that Murnau's fantastic "Faust - Eine Deutsche Volkssage" was released the same year, Henrik Galeen's version of "Der Student Von Prag" is definitely a forgotten gem of silent German cinema that definitely deserves a lot more of attention as another of those highly influential films that paved the way for modern horror in the sound era. It's probably not the most representative of the movies of the German Expressionist movement, but it's cast and crew alone make it essential viewing for anyone interested in that period in the history of cinema. While probably not the masterpiece it could had been, "Der Student Von Prag"'s haunting beauty is impossible to forget.