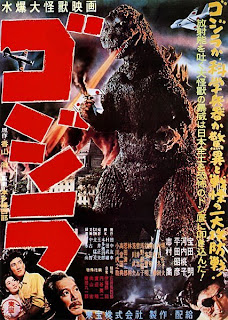 Without a doubt, one of the most recognizable figures in the history of modern horror and science-fiction cinema is the nuclear-powered lizard known as Gojira, or Godzilla, the King of the Monsters. One of the ultimate icons of Japanese horror, the giant beast has taken the roles of villain and hero interchangeably through its many incarnations; however, one theme remains a constant in its existence: the destruction of mankind's habitat by a twisted, uncontrolled and devastating force of nature, which Godzilla, symbol of the fears of the nuclear era, perfectly represents. It was in 1954 when the powerful monster first reared its head when, inspired by a tragic naval incident (as well as motivated by the success of 1953's film "Beast from 20,000 Fathoms" and other films about nuclear-powered monsters), writer Shigeru Kayama and director Ishirô Honda decided to give their own view, a very Japanese view, on the horrors of the nuclear era, very real horrors that their country had experienced first hand. And so, the most formidable of the giant monsters was born: Gojira.

The story begins with the Japanese fishing boat Eiko-Maru, which is attacked by a mysterious flash of light from the water near Odo Island, and is shipwrecked. Two other ships meet the same fate. In the mean time, the fishing community of Odo Island is unable to find any fish, which together with the news of the attacks prompts the locals to remember the legend of Gojira (or Godzilla), an ancient monster god that lives in the sea. Reporters arrive to Odo Island to investigate about the attacks, and that night, the giant monster (Haruo Nakajima) attacks the village, leaving only death and destruction. In the aftermath of the attack, paleontologist Dr. Kyohei Yamane (Takashi Shimura) discovers that Godzilla is a giant dinosaur mutated by atomic tests. Meanwhile, Dr. Yamane's daughter Emiko (Momoko Kôchi) visits her fiancée, Dr. Daisuke Serizawa (Akihiko Hirata) in order to break off their engagement, as she is in love with Lieutenant Hideto Ogata (Akira Takarada). But with in her visit she'll also discover that Serizawa has a secret that might be the only chance to stop Godzilla.

As written above, to conceive the story writer Shigeru Kayama found inspiration in the case of the Lucky Dragon, a ship which after straying too closely to a nuclear test site, had its crew severely injured by radiation. Having this as inspiration, it's not surprising that horrors of the nuclear era became one of "Gojira"'s main themes, and the screenplay, by Takeo Murata and director Ishirô Honda himself, follows this concept expanding the idea by adding their own experiences and memories about the nuclear attacks at Hiroshima and Nagasaki. This becomes obvious as not only it's the atomic test what create the monster but the monster's own wave of destruction is akin to the one left by the atomic bomb. The story is essentially simple, and highly influenced by American monster movies, but instead of jingoistic action and adventure, writers gave "Gojira" a huge dose of suspense, and a terrifying verisimilitude, resulting in a darker, almost pessimist tone, in which heroism does exist in people, but not without great sacrifices.

Deeply shocked by the destruction of Hiroshima and Nagasaki, director Ishirô Honda brings to life Kayama's giant monster by echoing the devastation that impressed him nine years before. While budgetary constrains forced Honda to shot "Gojira" in black and white, cinematographer Masao Tamai plays this to the film's advantage and creates an ominous atmosphere perfectly in tone with the somber mood the story has. Handling suspense in a masterful way, Honda keeps his monster in the shadows, hidden during most part of the film in order to enhance the effect of its arrival to Tokyo and the following destruction of the city. This climatic scene is effectively built up as a nightmarish vision of chaos, with Godzilla as an implacable force of nature unleashed to finish what the atomic bombs started. Raw and crude, yet full of style and suspense, Honda's "Gojira" succeeds in transforming a man in a monster suit into an apocalyptic vision of nuclear horror.

Framed by the big event that is Godzilla's rampage is the story of a love triangle between the main characters; and while definitely the giant monster's brutal attack overshadows such plot with its great impact and overwhelming power, the cast does and overall good job with their roles. Experienced actor Takashi Shimura plays Dr. Kyohei Yamane, a man more interested in studying Godzilla than on destroying it. As the good paleontologist, Shimura adds a certain sense of dignity to the cast, and is remarkable in his portrait of the troubled scientist, torn between his wish to understand the monster and his responsibilities. Nevertheless, even more interesting is Akihiko Hirata's work as Dr. Daisuke Serizawa, a complex character whose life will get a dramatic change with Godzilla's apparition. Hirata has a very commanding presence that helps him to steal every scene he's in. As Dr. Yamane's daughter, Emiko, Momoko Kôchi is effective in her role as Hirata's counterpart, while Akira Takarada, who plays the man she loves, is the cast's weakest link, being easily overshadowed by Hirata's great performance.

However, as time has proved, no matter how good the cast is (and the cast of "Gojira" is one of the best in any Godzilla movie), it is ultimately the giant monster, Godzilla, whom is the real star of the film. Because even when the Godzilla of "Gojira" is a brutal representation of nuclear horror, it's also a victim of it, and so its fury is mankind's punishment for going too far. Eiji Tsuburaya's special effects, while certainly a tad crude and rudimentary to an extent, manage to perfectly compel the terror of Godzilla with the only help of a rubber suit and carefully designed models. Tsuburaya's work may not had been the state-of-art effects director Honda expected, but together with the work by stuntman Haruo Nakajima, it truly created a mythical figure of epic proportions. While far from a perfect film, "Gojira" succeeds in making the unbelievable a reality, as despite lacking great special effects, the whole tone set by the story and the visual style transform the fantastic story of a giant monster into a very vivid nightmare with echoes from World War II.

Nowadays, more than 50 years after the first time Godzilla smashed a city, the big old monster is more a pop culture icon than the terrifying creature it originally was. Years of facing colorful enemies, kitsch alien invaders and cheesy sidekicks have made us forget that Godzilla is a monster, and that monsters were meant to be scary. Watching Ishirô Honda's original vision of "Gojira" is a great reminder that the big G is more than a giant monster: it's an enormous nuclear nightmare. Even when contrasted to the 1956 American re-edited version, "Godzilla, King of the Monsters", this film is really a completely different take on the monster. This is definitely Godzilla: the monster, the destroyer, the legend.

I'm a lifelong fan of giant monsters, and of Godzilla, but only got to see the original Japanese GOJIRA with the DVD release (a year or two ago). It really is a remarkable piece of work, and one can't help but feel disappointed that it stays sort of lost in the shadow of all the (significantly) lesser sequels that followed, and even of the American edit of the same picture (which I do love, but it can't hold a candle to the original). A giant monster movie with a point. Not a lot of those.

Of those many sequels (and two complete reboots, to date), the only one that has anything somewhat worthy of the original is GODZILLA 2000, of which I've only seen the American edit (but I'm told it's not that different from the Japanese original). It has a kooky, eye-rolling plot more reminiscent of the sequels, it's true, but there are several moments that suggest the filmmakers really understood why the original worked as well as it did. And it has a damn funny moment when an alien menace constructed from Godzilla's DNA arrives on the scene bearing a striking physical resemblance to the American Godzilla. Big-G promptly cleans his clock.