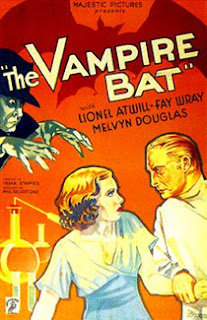 In many ways, it could be said that the horror genre in film was finally born the day Tod Browning's "Dracula" was released back in 1931. And that's because even when it was already a familiar theme in cinematography (being a genre explored by the German Expressionist movement of the 20s), the arrival of sound to film completed the shape of the classic horror movie. Browning's "Dracula" and Whale's "Frankenstein", the two monsters Universal Studios unleashed in 1931 would define the genre and start a "Golden Age" of American horror, a period deeply rooted in Gothic literature, murder mysteries and pulp fiction. Following Universal Studios' great success, many companies began to produce horror films. Majestic Pictures, a studio dedicated to the production of B-Movies, was one of those companies, and released several horror films of an originality and quality a tad superior to the norm. Frank R. Strayer's "The Vampire Bat" was one of those, a movie benefited by the presence of three horror legends: Lionel Atwill, Fay Wray, and none other than Dwight Frye.

In the German village of Kleinschloss, a series of mysterious deaths begin to take place, all having in common that the victims die of blood loss. Dr. Otto Von Niemann (Lionel Atwill), a famous scientist who lives in Kleinschloss, becomes very interested in the case, taking care of the victims while police inspector Karl Brettschneider (Melvyn Douglas) attempts to solve the case. Due to the strange way the people die, rumors of vampirism begin to run rampant through the town, as the police seem to be clueless about what exactly is causing the deaths. While Inspector Karl, his girlfriend Ruth (Fay Wray) and Dr. Von Niemann try to find a rational explanation for the deaths, the town is filled with paranoia, and the villagers begin to murder bats and suspect of everyone. Soon suspicion falls on Herman Gleib (Dwight Frye), a simple-minded man with a fascination for bats and who likes to make fun of the people's fears. As the deaths continue and neither Von Neumann nor the police can do anything, Herman will find himself in the middle of the turmoil caused by the vampire bat.

Combining elements of crime film and Gothic horror, writer Edward T. Lowe Jr constructs a surprisingly original tale of mystery in which the secret behind the deaths is the source of a plot filled with twists and turns in which paranoia and suspicion become the central themes. A skilled author of convoluted mystery plots, Lowe plays with the genre conventions and crafts a nice mix of different elements (from sci-fi to traces of proto-noir) that make "The Vampire Bat" to be more than the style of Gothic horror that was the norm amongst low budget productions of the time. While sticking to the popular archetypes of the genre, Lowe fleshes out his characters with interesting details that make them to stand out above the norm. Particularly interesting is Inspector Karl's struggle to keep the townspeople's superstitions at bay when himself is unable to find a rational explanation for the mystery. This battle between the rational and the supernatural becomes a major theme in the film, as it begins to hurt the friendship between Insp. Karl and Dr. Von Niemann.

Seasoned craftsman Frank R. Strayer is the man at the helm of "The Vampire Bat", and once again, he gets the job done with his simple yet effective style, although "The Vampire Bat" features some of his most imaginative work. More a hired-gun than a stylish director, Strayer has never been known as a stylish artist, but in "The Vampire Bat" there are a couple of memorable moments where Strayer, along cinematographer Ira H. Morgan, truly capture the story's style, mix of Gothic horror and pulp fiction. It helped a lot that to his fortune, Strayer was able to work in some of the sets of Universal's 1931 classic, "Frankenstein"; because he really makes the most of that chance by recreating the expressionist look and some of the ominous atmosphere that James Whale's movie had. It's clear that Strayer was asked to mimic the Universal films, but given the originality of the screenplay and the quality of his cast, "The Vampire Bat" resulted in something more than a mere copycat, as it's dark plot allows Strayer to make scenes a tad more terrifying than what was seen in those classics.

The work of the actors in "The Vampire Bat" is quite better than the average found in most low budget horrors from the same era, with the main reason for this being the fact that it has a great cast that even A-productions would envy. Leading the cast is a young Melvyn Douglas, whom truly commands the film with a charming personality and good natured humor that suit well his role as the film's "hero". While the screenplay may not have the best dialogs ever written, Douglas makes an adequate, and very professional job with it. Horror icon Lionel Atwill appears as Dr. Von Niemann, and once again Atwill delivers his trademark work as eccentric scientist. However, Atwill (and to be fair, everyone else as well) is overshadowed by Dwight Frye's remarkable turn as Herman. While at first glance it may look like a retreat of his work as madmen in "Dracula" and "Frankenstein", Frye's work here has far more depth, being able to steal the spotlight now. Fay Wray is good as Karl's girlfriend Ruth, but her character is not exactly the most challenging of all.

With such an impressive cast and a great original idea at its core, "The Vampire Bat" has many elements that make it quite an interesting view. Unfortunately, it also has several things that make it fail from reaching its enormous potential. For starters, while writer Edward T. Lowe Jr has built a very interesting plot, his work with dialog is at times kind of poor (unlike for example, his stylish crime film "The World Gone Mad" of the same year), resulting in a loss of credibility that terribly hurts the mood of the story. Also, the attempts at comic relief feel forced, awkward, and even copied from James Whale's "Frankenstein". But still, I think the biggest disappointment is how director Frank R. Strayer fails at transforming an interesting screenplay into an interesting movie, as even when he does create a couple of thrilling moments full of atmosphere, most of the time the movie just flows without any real style. To summarize, "The Vampire Bat" is a bit unmemorable in the sense that it lacks that special something that makes a film rise above the norm.

But even when it's definitely not the great movie it could had been, "The Vampire Bat" is still an interesting curiosity that certainly is worth a watch. Done in order to follow Universal's success, "The Vampire Bat" became experimental ground for Lowe's style of pulp fiction and resulted in a very different kind of beast. It's a shame that a mediocre work of directing damage a interesting concept (and one with a great cast), but fortunately, it's not as bad as it could had been, just definitely not as great as it should had been. Quirky, odd, and different, "The Vampire Bat" is a horror film about vampires that take the concept to a whole different direction. Now this is the kind of movie that should be remade.

Hello author of W-Cinema. After searching high and low for a blogger who did movie reviews for their posts, and not being able to find one, I convinced myself that none such existed. That was until today when I was browsing for info on, "The Vampire Bat" 1933, and came across your review of it. I found it to be extremely enlightening, and am looking forward to reading your older reviews, as well as your new ones (That is to say, if you are still reviewing). Anyway, I am also a movie reviewer, and I also use a blog to post my reviews. I am so far away to getting to where you are now, though I hope to get there someday. I do Horror movie reviews to be exact, and although I don't consider myself to be a full critic yet, I do enjoy reviewing films. I am still in the primal stages with reviewing movies, and I'm on my fourteenth horror review so far. I am now currently following your blog and I hope that you do the same for me. I'm open to any constructive criticism you have to offer, as long as you are willing to give it. Thank you for listening, here is my blog: cultclassictheater.blogspot.com

Cool man, thanks for the kind words! I'll stop by your blog!