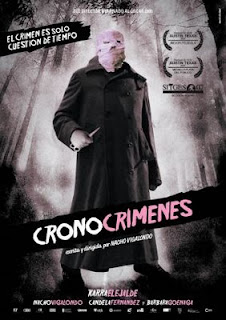 Many times, the idea of science fiction movies is related almost immediately to big budget films that display amazing special effects and a grandiose art design. However, as in its literary form, science fiction is simply about bringing fantastic visions from the future to the realm of possibility, something that despite what most sci-fi movies attempt, doesn't necessarily need flashy visuals. Science fiction stories are still stories, and no matter how amazing the visuals are, if the story is bad, the movie will be bad. So, in the end all that's needed is a powerful, tight, creative, and most important, captivating story. And it won't matter if it's about that classic sci-fi theme that tends to give headaches to writers: time travel. Ever since British author H. G. Wells wrote "The Time Machine", time travels have been a favorite subject for stories, but in film, its complexities make it a hard subject to tackle. But now, Spanish director Nacho Vigalondo demonstrates in "Los Cronocrímenes" that, having a huge dose of imagination, time traveling is not that expensive.

In "Los Cronocrímenes" ("Timecrimes"), Karra Elejalde plays Héctor, a common man who one day, while resting in his backyard, watches through his binoculars a naked woman (Bárbara Goenaga) in the nearby woods. Héctor decides to investigate and is attacked by mysterious man with the head covered in bandages. Hunted by the strange figure, Héctor runs through the woods until he finds a building in which he hides. Inside he finds a walkie-talkie and calls for help. Hs call is answered by a young man (Nacho Vigalondo) located in another building, who instructs Héctor about how to reach him. Followed by the bandaged man, Héctor makes his way to the other building and meets the young man, whom is a scientist. The scientist helps Héctor to hide inside a strange-looking machine, machine that accidentally gets activated sending Héctor exactly one hour in the past. Now, there are two Héctors existing at the same time, so Héctor #1 now must do whatever is necessary to make Héctor #2 follow his steps to keep existing, but the job won't be easy, and crime, is just a matter of time.

Written and directed by Nacho Vigalondo, "Los Cronocrímenes" has as its greatest strength a carefully developed screenplay at its core, in which Vigalondo plays with the time travel concept to build up a clever, complex story that's not only highly entertaining, but also thought-provoking and simply fascinating. By focusing more on the consequences of the travel than on the technology to do it, Vigalondo makes a very believable portrayal of time travel without having to resort to heavy visual effects, as everything is done and explained by the way the story unfolds. Such is the power of a carefully planned storyline, as the plot is so captivating that its verisimilitude is always out of question. Built as a convoluted puzzle that the main character, Héctor, must solve to return to normality, "Los Cronocrímenes" keeps its mystery well guarded until the last frame, handling masterfully suspense and most important, never losing any consistency (something most stories about time travel lack) and always having a surprising twist to add to the plot.

As written above, director Vigalondo forgets about all the flashy visuals that tends to surround sci-fi movies and remains entirely focused on the story. Done with an extremely low budget, the movie is more about the results of the trip than about the trip itself, with the time machine being nothing more than an odd looking industrial artifact. Nothing iconic, nothing surprising, and yet, the power of the story is that strong that despite having one of the less remarkable machines in science fiction, the time traveling in "Los Cronocrímenes" is completely believable. Forced to relay entirely on the story, Vigalondo brings to life his story in a remarkable way by taking great care of every tiny detail on the screen. Playing with touches of noir and horror, Vigalondo creates a thrilling atmosphere of mystery out of the common neighborhood where Héctor lives; and thanks to the great eye of cinematographer Flavio Martínez Labiano (frequent collaborator of filmmaker Álex De la Iglesia), he manages to take the everyday world to the realm of fantasy without losing any credibility.

Given the importance the story has in the film, the performances of the cast are instrumental for the success of the film, and director Vigalondo truly gets the best out of them. As the main character, Héctor, actor Karra Elejalde is truly superb, carrying the weight of the film on his shoulders with great talent and skill. As a typical man caught in a series of highly atypical events, Karra's performance is excellent and very natural, making this unlikely hero (better said, antihero) a very sympathetic character. Director Nacho Vigalondo himself plays the scientist, a young man whose hurry to test the device will put Héctor in several complications. Vigalondo is very good in his role, portraying the unexperienced, nervous young man with ease. However, I must say that he is easily overshadowed by Karra's terrific work. Candela Fernández plays Héctor's wife Clara and Bárbara Goenaga is the mysterious girl in the woods, characters whom will get involved into the time crimes as Héctor goes back in time. Both are not only beautiful, but very effective in their roles.

Watching "Los Cronocrímenes", it's really amazing to see what Vigalondo and his crew have achieved with so little, as it's safe to say that with this brutal display of imagination, Vigalondo has taken science fiction back to its roots, where what mattered the most were the effects fantastic science had on people, not the fantastic science itself. It is also a film that shows the great importance of having a good script to work with, as it is the simple, yet intensely captivating storyline what drives the movie. Of course, this is not to say that the script is the only worthy element, as definitely every element adds its magic to the whole picture, I'm just saying that having such a terrific basis meant a lot for the development of the film. I must also add that Flavio Martínez Labiano's remarkable work of cinematography does add a lot of atmosphere to the movie because, while apparently simple (everything in the movie is minimalist), his eye perfectly captures the entrance of Héctor into the maddening world of time travel.

Four years after his breakthrough short film, "7:35 De la Mañana" (nominated for an Academy Award, among other awards), director Nacho Vigalondo proves in his feature length debut that his fresh vision and great talent will probably result in greater things in the future. For a career that's just starting, "Los Cronocrímenes" is a good omen of what's about to come from this filmmaker. A deeply entertaining, thought-provoking film, "Los Conocrímenes" will definitely become a cult classic of the genre, as it remind us about what truly matters about science fiction (and well, about movies in general): a good story told well. Like every good puzzle, "Los Cronocrímenes" leaves you asking for more, and even after one knows all the answers, it's still a thrilling story to watch. A must see indeed.