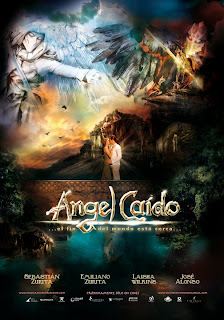 Through the history of Mexican cinema, with its penchant for stylish melodrama and musical comedies, full fledged ventures into the fantasy genre have been scarce, almost a rarity. Granted, the Mexican film industry has produced some of the best horror films in the world, and the Mexican culture has a long standing literary tradition of magical realism that has found its way into Mexican cinema in one way or another; however, to find more traditional subgenres of fantasy is particularly rare. Aside from the surreal work of Jodorowsky and Rafael Corkidi, there have been very few examples of purely fantasy films ("Zurdo" and "Historias del Desencanto" come to mind). It is because of this scarcity that the effort of newcomer director Arturo Anaya is particularly admirable, as he debuts with an ambitious fantasy film titled "Ángel caído", which is based on the first of a series of fantasy novels he wrote. Now, the effort and Anaya's determinations are without a doubt admirable, unfortunately, the end result well, not so much.

The story of "Ángel caído" (literally "Fallen Angel") begins in Italy, when a baby is taken to an orphanage by the police. Years later, the baby is now a young kid named Liutprando (Emiliano Zurita) or Liut for short. One night, a demon arrives to the orphanage searching for Liut, but the kid is miraculously saved by his Guardian Angel and taken to an isolated monastery in Greece. At the monastery, Liut is welcomed by brother Angus (José Alonso), a wise monk who explains Liut his true origin: he is a Sephyro, a half-human half-angel with supernatural powers. Liut is shocked at the revelation, but there's more, he also has inherited a mission from his father: to find the Sword of Fire, the legendary Sword that Liut's father used as Guard of the Garden of Eden. With this in mind, Angus begins to train Liut, who becomes a young man in the process (Sebastián Zurita). A clue is hidden at the University of San Rafaello, so Liut enrolls to find it. However, Luzbel the fallen angel (Carlos Cacho) is waiting for him.

As written above, "Ángel caído" is a film written by director Arturo Anaya, adapted from his own novel “Ángel Caído Sephyro, el canto segundo”, though given the long time of production the film had, it's difficult to say what happened first, either the film or the novel. The story can be divided in two parts, the first one chronicling Liut's childhood and his training at the monastery, and the second and main section of the film is dedicated to his time at the University and his battle against Luzbel's minions. While the setting is the real world, "Ángel caído"'s secret world of demons and angels grounds the story in the field of the fantasy epic film. At its core, Arturo Anaya follows closely the classic monomyth pattern to unfold his story, which is largely centred around Liut's heroic journey. An element of fish out of the water is added in the secodn half, as Liut's upbringing at the Greek monastery is put in contrast to the modern world at the University of San Rafaello, embodied in his dorm room neighbor Paul.

Despite working with an extremely low budget, director Arturo Anaya opts for a heavy use of special effects in his film, and surprisingly, many of them actually look fine. However, at times it feels excessive, not only in the sense that its low production values become notorious, but also as the amount of digital enhancement tends to darken too much the work of cinematographer Juan Castillero. "Ángel caído" is a case of digital cinematography being damaged in postproduction. While undoubtedly a bold effort, "Ángel caído" showcases the limitations of the unexperienced Anaya, not only in purely budgetary terms, but as a director. The story's pacing is quite uneven (the work of editing is pretty poor), often reaching extremely slow points only to follow it with sequences that seem rushed. Anaya's tacky visual narrative, which seems greatly influenced by television, doesn't really capture the epic feeling that his story pretends to have, and feels more apt for a TV series.

The cast is one of the film's weakest elements, though two cast members truly shine in their roles. Unfortunately, they aren't the protagonists, as Sebastián Zurita and Laisha Wilkins, Liut and Persefone respectively, aren't really that effective. Wilkins, though owner of a natural beauty, fails to be convincing as she doesn't seem to be fully into the project. On the contrary, Zurita shows passion and commitmet to his heroic role, but his skills aren't up to the challenge and ends up wooden and emotionless most of the time. Now, the two actors who truly give their best are José Alonso and the young Luis Caballero. As the monk Angus, Alonso is pitch perfect as the wise old man of this journey, and he steals a couple of scenes with his sharp comedic timing. Playing Paul, Caballero excels in his performance as Liut's spoiled rich friend, and truly gives life to the second part of the film with a vibrant performance full of energy. The rest of the cast is pretty average, and while Humberto Zurita shows his skills, he is reduced to a boring and clichéd role.

In fact, boring and clichéd are adjectives that unfortunately, extend to many other aspects of the film, as "Ángel caído", as laudable as it is as a low budget epic fantasy, it's marred by problems bigger than its low budget. In fact, while low budget could serve as an excuse for its technical problems, the real failure in "Ángel caído" is in a more basic, yet neccessary element: its story. Anaya's story is not only derivative and unoriginal (to be fair, most fantasy epics sadly have this same problem in one degree or another), it's also pretty thin in its development and lacks engaging main characters. While Anaya has done a good job in creating his mythology (borrowing from Christian Catholic elements), the human conflict is missed in his drama, and the virtuous Liut ends up being an uninteresting one-dimensional character. A shame, as the world and premise of "Ángel caído" certainly sound with the potential to make a remarkable work in the fantasy genre.

In the end, while the film does have certain flaws in its visual look, the special effects are pretty good looking for a film of its budget. In this aspect Arturo Anaya's team truly excelled, but unfortunately, the excuse of low budget can't save the film from it's fatal flaw, a problem that hamrs both big Hollywood films and indie features: it's poor excuse for a story. Unoriginal, unengagin, derivative and lifeless, "Ángel caído" is guilty of the worst sin a movie (regardless of budget) can commit: to be boring. As a bold venture into a genre largely forgotten by the Mexican industry, Anaya's "Ángel caído" is enormously admirable. As an epic fantasy film, it's a tragic failure. Hopefully Anaya will do better next time, because the very few good things in "Ángel caído" are truly good.