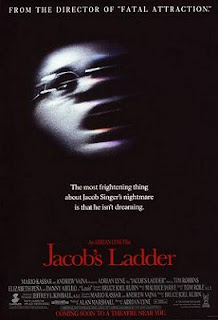 One of the greatest misconceptions about the horror film genre is that it is a clichéd, predictable and juvenile entertainment based entirely on sex, blood and gore. Certainly, there are a lot of horror films that would fit that description without problem (and without shame), but the fact is that horror films go beyond that. And that misconception is so deeply ingrained in the mainstream audiences that often when a great horror film appears ends up as being labeled as a "thriller" instead of a horror movie, as if horror films were by default unable to present intelligence and quality. But they do, and a great example of a brilliant horror film that breaks that popular misconception about the genre is Adrian Lyne's 1990 masterpiece, "Jacob's Ladder". After having earned commercial and critical acclaim with "Fatal Attraction" (1987) and with a good reputation as maker of sexually charged thrillers, director Adrian Lyne tackled a much darker theme in this existential venture into psychological horror.

"Jacob's Ladder" is set in 1975, and is the story of Jacob Singer (Tim Robbins) a Vietnam war veteran who works as postal worker and is trying to start a new life with his girlfriend Jezebel (Elizabeth Peña) after his ex-wife Sarah (Patricia Kalember) divorced him. However, his sanity begins to fade as he is troubled by horrible hallucinations and increasingly severe flashbacks to his days in the war, his previous marriage, and the years before his little son Gabriel (Macaulay Culkin) died. The visions of monsters and the return of the horrors of the war start to become dangerous to Jacob as the hallucinations get more real each time. Jacob is contacted by one of his former Army friends, Paul (Pruitt Taylor Vince), who tells him that he is also having hallucinations. As Jacob's mind shatters, he also suffers mysterious threats to his life, and the murder of Paul gives ground to the theory that everything is the result of the Army's experimentation on the soldiers. However, there's something more in Jacob's soul.

Written by Bruce Joel Rubin, "Jacob's Ladder"'s hallucinatory trip to madness is easily one of the most captivating and vivid portrayals of the horror of insanity ever put on film, and most of the film's success is thanks to Rubin's cleverly devised script. Complex and multi-layered, Rubin takes Jacob through hell and back in his quest for an explanation to what is happening to him, but given the unpredictable nature of his mental condition, there is never an only answer to the bizarre series of events that happen in his life. Reflecting his particular interest in metaphysics and spirituality (a constant theme in his career, as exemplified by "Ghost"), Rubin explores ideas about life and death, and the nature of the soul. However, the tone and atmosphere of "Jacob's Ladder" is somewhat darker than in his other works, though without losing its symbolism. While the complex narrative may sound a bit too ambitious and contrived, Rubin makes it work and the final result is one of the most original movies (not just horror) ever written.

Know for his stylish visual narrative and strength in developing characters, director Adrian Lyne does a remarkable job (one of the best in his career) at giving life to Bruce Joel Rubin's story of insanity and horror. Particularly impressive is the camera experimentation to create the unsettling effects of the hallucinations, a visual imagery that proved to be highly influential ("Jacob's Ladder" is credited as an important influence on the "Silent Hills" videogames for example) due to their disturbing nature. The film's atmosphere as a whole is one of unnerving decay and disorder, meant to reflect the deteriorated state of Jacob's own mind. Cinematographer Jeffrey L. Kimball delivers his most accomplished work and captures the urban chaos of New York with great skill, adapting gracefully to Lyne's stylish vision and transforming the city into a nightmarish world in which nothing is what it seems. Lyne keeps the symbolic nature of Rubin's screenplay, sustaining the ambiguity, but without losing the story's humanity and soul.

The cast delivers a great job in "Jacob's Ladder", but certainly the highlight of the film is Tim Robbins, who plays the tortured Jacob Singer. In one of the best performances of his career, Robbins is simply perfect as Singer, capturing masterfully the inner horror of a man betrayed by his own mind. Playing insanity without resorting to clichés, Robbins transforms himself into the troubled soul of Singer and proves that he is certainly a vastly underrated actor. Cuban-American actress Elizabeth Peña is very good as Jacob's girlfriend Jezzie, giving an effective performance in its subtlety, though her character feels somewhat limited. However, it's worth to point out that the film is entirely focused on Jacob, so there's not much space for other actors to shine. In fact, the only other actor who manages to do it is Danny Aiello, who appears in a small but very important role as Jacob's chiropractor and only friend Louis, who acts as a spiritual guide in Jacob's attempt to understand his experiences.

"Jacob's Ladder" is definitely one of the most original films of the 90s, due not only to it's brilliant storyline, but also to the way Lyne crafted the film in a simple yet very effective way. Certainly, the film does contain some plot twists that may not be that original anymore, however, the beauty of "Jacob's Ladder" is in the stylish way the challenging complexity of the script unfolds. It's also remarkable how Lyne manages to keep the spirituality that's the focus of Rubin's screenplay, as the film has a powerful supernatural atmosphere that enhances the feeling of Jacob's world blurring the line between reality and insanity. The conspiracy thriller aspects are another good touch the story has, that Lyne allows himself to explore, but without losing the focus on the film's theme: Jacob's struggle with his own demons. Like the Biblical Jacob (that inspired themes of the film), Jacob Singer struggles with something beyond himself, and Lyne makes of this struggle a haunting experience.

The terms "psychological thriller" and "psychological horror" are used very loosely in recent times, however, "Jacob's Ladder" is a movie that truly represents what psychological horror is. With its delightful mix of mystery, suspense and horror, Adrian Lyne's "Jacob's Ladder" is a masterpiece of horror that serves as the perfect example of a story that uses horror to explore limitless possibilities. Perhaps its only flaw is that it hasn't aged that gracefully (it looks like a true product of the 80s, though that's perhaps a flaw of Lyne's visual style as a whole); nevertheless, the strength of the story is still as captivating as when released. As a film that explores the horror of conspiracies, "Jacob's Ladder" is a true horror gem.

The Bloody Pit of Horror said...

I can't believe I haven't seen this one yet. I really need to. I've heard mostly good things about it.

Wow really?? Yeah you should go and watch it now!!