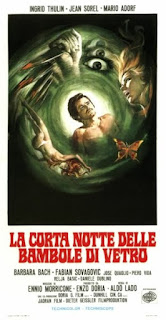 Having done a career as assistant director during the last years of the decade of the 1960s (in works such as Bernardo Bertolucci's "Il conformista" and several films with director Maurizio Lucidi), Italian filmmaker Aldo Lado got his chance to debut as a director with a story of mystery and horror (a giallo film) with the title "Malastrana". Executives from the film's distributor thought the title, which was a reference to the Malá Strana neighborhood in the city of Prague (where the story was set), was a bit too ambiguous and wasn't working, so it was decided that the film would be titled "La corta notte delle farfalle", meaning "Short Night of the Butterfly". To director Aldo Lado's misfortune, that very same year another tale of mystery was being released in Itay with butterflies in the title: "Una farfalla con le ali insanguinante", so another title changes was required at the last time, settling for the more ambiguous and poetic "La corta notte delle bambole di vetro", or in English, "Short Night of Glass Dolls". The film would end up being considered one of the most celebrated and unusual within the giallo subgenre.

"La corta notte delle bambole di vetro" begins with the discovery of the corpse of Gregory Moore (Jean Sorel), an American reporter who had gone missing a couple of days before. However, while it's apparently clear that Moore is dead, he is actually alive and conscious, trapped in a body that he can't control and unable of any form of communication. Confused by this, Moore tries to understand what has happened to him, remembering how everything started: with the mysterious disappearance of his beautiful girlfriend Mira (Barbara Bach) after a party they had attended. Moore begins to remember the events that took place after her disappearance, as while the local police had quickly dismissed the case as the bitter splitting of a couple, Moore had discovered a link between Mira's disappearance and other cases of missing girls in town. Moore's co-workers, Jessica (Ingrid Thulin) and Jacques (Mario Adorf) try to help him, though without really believing the clues that Moore follows, clues that will lead him to discover the morbid secrets of Prague's high society.

Written by director Aldo Lado himself along veteran scriptwriter Ernesto Gastaldi (writer of several Italian films of the genre), the story of "La corta notte delle bambole di vetro" presents an unusual spin to the mystery thriller at basing the plot in a series of flashbacks to reporter Gregory Moore's memories, while at the same time he tries to recover the control of his body. It's in this element where suspense comes into play in the story, as Gregory Moore isn0t really dead, just completely paralyzed by some reason unknown to himself, so tension rises by having him unable to communicate or defend himself. Mystery is perhaps the most important element in "La corta notte delle bambole di vetro", because as the plot unfolds it makes some unpredictable twists and turns that take the story each time closer to more extraordinary and morbid terrains. Certainly, "La corta notte delle bambole di vetro" moves away from the classic model of Italian giallo (stylish thrillers with great emphasis on graphic violence and eroticism), however, it truly keeps the horror and tension typical of the genre.

Another giallo element that remains intact in "La corta notte delle bambole di vetro" is its great visual stylization. Director Aldo Lado creates in "La corta notte delle bambole di vetro" an ominous atmosphere of mystery that reaches a haunting oneiric level as the plot unfolds and Moore gets deeper into the horrible secrets of Prague. It's interesting how what starts as a somewhat typical thriller get a greater stylization as Moore descends into darkness. Despite this being his feature length debut, director Aldo Lado shows a great domain of his camera and a quite developed visual narrative, as he manages to take full advantage of the awesome work of cinematography done by Giuseppe Ruzzolini. As mentioned before, suspense is a fundamental thing in "La corta notte delle bambole di vetro", and the film has director Aldo Lado showing his great domain over it. Besides this, it's worth to point out the truly remarkable musical score composed by the master Ennio Morricone, which truly enhances the ominous atmosphere of surreal nightmare that Lado's film has.

Acting in "La corta notte delle bambole di vetro" is in general of great quality, even taking into account that the work of dubbing done in the film (a common practice in Italian cinema) is less than stellar. Leading the cast is French actor Jean Sorel (known for his work in Luis Buñuel's "Belle de jour") as reporter Gregory Moore. While nothing truly outstanding, Sorel makes a pretty acceptable job and, despite his dubbing, manages to carry the weight of the film without problem. However, he is a bit overshadowed by Ingmar Bergman's legendary muse, Swedish actress Ingrid Thulin, who plays his coworker and former lover, Jessica. Thulin manages to create a pretty complex character despite having a character with less weight in the plot, showing her talent as a woman divided between what she feels for Moore and her hatred towards his new girlfriend. As Mira, Barbara Bach (in her second giallo after "La tarantola dal ventre nero") makes an acceptable job, and even when her character is limited to looking good, Bach manages to fill the screen with her great presence.

The rest of the performances are pretty good, and even the dubbing isn't really that aggravating (with the sole exception being the case of Mario Adorf's dubbed voice). "La corta notte delle bambole di vetro" reveals itself as a quite atypical giallo, gifted with a great visual beauty and an attractive plot that aims for tension and suspense instead of graphic violence. If there's any problem in "La corta notte delle bambole di vetro" is that probably director Aldo Lado at times abuses too much of the resource of having Gregory Moore's narrating the film, resulting in moments that could seem a bit ridiculous. Another problem is that the film becomes a bit slow in occasions, however, it's worth to point out that it never becomes tedious or boring. Certainly, the premise where the story rests requires a bit more suspension of disbelief than what would be desired, given how extraordinary the situation is. Fortunately, the film more than compensates this with an unpredictable plot and a superb finale full of tension.

In this his debut, director Aldo Lado manages to create an excellent story of suspense and mystery that breaks the classic conventions of Italian giallo. Focused more on mystery than on violence, "La corta notte delle bambole di vetro" opts for a kind of horror a bit different, one based on tension and paranoia rather than in visual shock (which isn't bad, really). Lado keeps his moments of violence for carefully established moments, which enhances a lot the film's suspense. While far from the traditional style of "thriller all'italiana", Director Aldo Lado's film "La corta notte delle bambole di vetro" is one of the best films ever done within the giallo subgenre. With a haunting visual beauty and a captivating musical score, "La corta notte delle bambole di vetro" is a forgotten classic of horror and mystery.