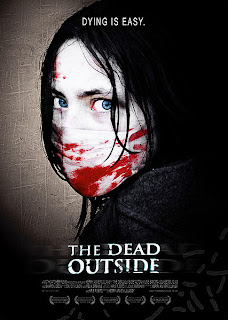 Ever since the release in 1968 of George A. Romero's classic horror film "Night of the Living Dead", zombie films quickly became a quite popular subgenre of horror; and that was because the type of scenario that Romero's film introduced to the world allowed countless narrative possibilities (worth to point out that its direct ancestor was Richard Matheson's novel "I Am Legend"). From the gory violence of Lucio Fulci's "Zombi 2" (1979) to the comedy of Wright's "Shaun of the Dead" (2004), to even more existentialist meditations like "I, Zombie: The Chronicles of Pain" (1998). The renewed popularity that the zombie film experienced at the dawn of the 21st century has brought new ideas on the subject, and amongst them there's the one presented by the British film "The Dead Outside", an independent production released in the year 2008. Directed by Scottish director Kerry Anne Mullaney, "The Dead Outside" fits in the kind of zombie film that focuses more on the social repercussions of the outbreak of a virus. Unfortunately, the result is not that stellar.

"The Dead Outside" is the story of David (Alton Milne), a young survivor of a devastating neurological epidemic that has ravished the world. The disease, of an unknown origin, is highly contagious and the result in those infected is a loss of reason, of sense and an increase of violent impulses, reducing them essentially to partially sentient creatures unable to feel pain. David wanders in his car through the fields of Scotland looking for other survivors, as the group where he was living was attacked with him as sole survivor. In his quest, David finds a farm that seems inhabited, so he decides to spend the night there. While he rest, he is surprised by the house's owner, April (Sandra Louise Douglas) and her old rifle. After making sure that David is not infected, April allows him to star for a while. Soon, the differences between them will make their personalities clash, because while David still sees the infected as humans, April exterminates them without any remorse, full of a fury that intimidates David. But under that anger, April hides a very important secret.

Written by Kris R. Bird and director Kerry Anne Mullaney herself, "The Dead Outside" tackles the zombie film genre from an interesting point of view: that of those who survived the apocalypse. So, rather than being a traditional horror film, "The Dead Outside" is a character study about these two characters that circumstances have gathered in a lonely farm in Scotland. As David and April face the infected that occasionally get near the farm, the writers contrast the different ideas both characters have about their future, with David hoping to recover a certain degree of normality while April only wants to be left along. In general, the premise of "The Dead Outside" is interesting as it aims for psychological horror instead of a more visceral type of it, as it focuses on the frail balance that exists in the relationship between David and Apri. Unfortunately, Bird and Mullaney's screenplay fails to truly explore those themes, as it doesn't develop its characters beyond the stereotype, which eventually becomes a bigger problem when the plot doesn't have much going on in it.

While her screenplay is pretty much lacking, as a director, Kerry Anne Mullaney has better luck, as "The Dead Outside" shows she has a well defined vision for her quite particular brand of zombie apocalypse. Working with minimal resources, Mullaney creates a minimalist film placing greater emphasis on atmosphere and tension between her characters. The key element in "The Dead Outside" is the feeling of loneliness that invades the characters and their reactions to it. Mullaney reflects this loneliness by taking great advantage of the work of cinematographer Kris R. Bird, who makes an effective job at capturing the strange beauty of the desolated Scottish fields. In "The Dead Outside", Mullaney employs a slow, contemplative narrative, which goes hand in hand with the screenplays' focus on the characters and their loneliness. The atmosphere of desolation generated by Mullaney is effective in the realist way it presents her apocalypse, an apocalypse of loneliness where survivors only have their memories with them. Sadly, Mullaney doesn't manage to do something with this, thanks to a story that goes nowhere.

As mentioned before, "The Dead Outside" is more a character study than a typical horror film, exploring the consequences of the epidemic in two of its survivors. By focusing on its characters, the performances become instrumental to the success of "The Dead Outside", but unfortunately, the acting in the film is pretty much average. Alton Milne is maybe the only exception, making a pretty acceptable job as the traumatized survivor Daniel, who tries to start his life again. In a retrained yet still emotive performance, Milne manages to transmit his characters' loneliness and melancholia, after having lost everything except hope. On the contrary, SandraLouise Douglas makes an unfortunately bad job as the mysterious April, making an exaggerated performance of the anguish and anger of the characters, resulting in her making April look like nothing more than a capricious and bitter teenager. Of course, not everything can be blamed on Douglas, as her character doesn't give her much space to do something better. Sharon Osdin appears as a third survivor, making an OK performance, though nothing surprising.

"The Dead Outside" is an independent horror film with as many virtues as it has flaws, which results in a movie that's never entirely satisfying at all. Technically, it's remarkable how director Kerry Anne Mullaney manages to do it with such limited resources, but ultimately, her film suffers from the greatest sin a movie can commit: being boring. As mentioned above, the problem is not in its premise, which is certainly interesting, it's problem is that "The Dead Outside" never truly moves on to something, as while it establishes several subplots that point towards something interesting, nothing relevant really happens. The clash between two characters, based mainly on the contrast between David's desire for returning to society and April's hate towards it, only results in discussions where April ends up just screaming in anger demanding to be left alone. Thus, a character that's the center of the main plot and whom should be interesting, is left reduced to an annoying stereotype that makes her lose her supposed importance in the plot.

In this her debut, director Kerry Anne Mullaney certainly shows a defined vision and narrative style, as well as a great skill to do a lot with very little. It's a shame that there hasn't been more care while developing the screenplay, because "The Dead Outside" ends up looking like an incomplete work. In fact, it's quite probable that if the movie had been developed as a short film, "The Dead Outside" could had worked a lot better, as what results is a film of a terribly slow rhythm where ultimately nothing happens. Despite its interesting premise, "The Dead Outisde" ends up as a film that sadly is neither good nor bad, just simply forgettable. Nevertheless, films like "The Dead Outside" prove the great versatility that the zombie film subgenre has for storytelling.