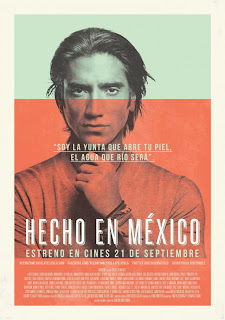 To make an accurate portrait of the identity of a nation is not an easy task, as whomever attempts to do it will face the fact that said identity rarely comes from an absolute homogeneous cultural source, but instead is the result of the multiple cultures that form said nation. Cultures that normally are quite different from each other despite belonging to the same country. And yet, this is precisely what producers Lynn Fainchtein and Duncan Bridgeman attempt in the documentary "Hecho en México": to make a portrait of Mexico's national identity, a portrait to identify the Mexicanity of almost 116 millions of people of different cultural backgrounds. To do this, Fainchtein and Bridgeman took as starting point a theme that both of them clearly dominate, the music (as Fainchtein has been music supervisor of several feature length films, while Bridgeman is one of the founders of renowned world music project "1 Giant Leap"). Thus, "Hecho en México" is a documentary that uses Mexican music in an attempt to portrait the identity of Mexicans. However, things do not result that good.

In "Hecho en México" (literally "Made in Mexico"), a large group of Mexican musicians (and a couple of foreigners) lend their talents to mix their different styles and make a soundtrack to reflect Mexico's national identity. Mixed by Bridgeman, music becomes the guide to join several interviews with musicians, artists, philosophers and other intellectuals, whom offer their opinions about what is Mexicanity for them. Those opinions move around several themes, such as love, death and religion (amongst others), looking for the ways Mexicanity arises around all these concepts. And all this takes place as the filmmakers visit several corners in the country, showing its natural beauty, its many towns, cities, its inhabitants and their respective cultures, and finally how all those come to reflect the Mexicanity in their diverse artistic expressions. Music comes as the soundtrack for this journey, with the musicians moving along with the filmmakers through Mexico's jungles, through its ancient ruins, as well as through its streets and roads.

Produced without following an established screenplay, "Hecho en México" is build with the interviews with the several celebrities that give their two cents about Mexicanity, talking about the different concepts that form the film's structure. Besides the aforementioned themes of love, death and religion, other concepts are discussed, like spirituality, drugs, the border with the United States, and the relationships between the sexes. However, this construction, based only in a group of pretty abstract and vague concepts results in pretty shallow interviews where there isn't really the care to follow a definitive goal, and it's just talking for the sake of talking. And this is not really something to blame the interviewees, as it would seemed that there wasn't really any direction in the interview besides the abstraction of the concept. Mexicanity is such a huge idea that by being portrayed in such a vague way makes the film to fall in common places and, on some occasions, ridiculous opinions. Of course, there are notable exceptions, but the common denominator in the interviews is shallowness.

British filmmaker Duncan Bridgeman takes the director's seat and is in charge of giving an order to the collection of ideas that form "Hecho en México", and to do this, he puts to good use his skill as sound mixer to transform Mexican music in the backbone of the movie. As he had previously done as a member of "1 Giant Leap" (project where Bridgeman, along Jamie Catto, recorded and mixed music and images from all over the world to create a new audiovisual concept), Bridgeman combines with great skill the whole specter of Mexican music, traditional and modern, rural and urban, northern and southern; achieving very attractive musical numbers that shape "Hecho en México". Thus, Bridgeman's mix results in a musical hybrid where Mexico's many different music styles are fused together in a single sound. This is certainly the greatest achievement in "Hecho en México", or better said, it's only achievement, as that definition of Mexicanity that the interviews leave at mere pseudo-intellectualism, is actually discovered by the musicians in the fusion of their talents and rhythms.

Without a doubt the music mixed by Bridgeman is the main attraction in the film, though not the only one, as the movie has an excellent work of cinematography courtesy of Gregory W. Allen, Lorenzo Hagerman and Alexis Zabe, whom manage to capture images of great beauty. Nevertheless, the technical merits aren't enough to save "Hecho en México" from its many flaws, whom are focused in the ironic lack of identity that the film suffers. In other words, the documentary "Hecho en México" seems to try to be at the same time a music video, a promotional for tourism, and a sociological study. Sadly, it's only as a long music video that the film somehow manages to work, as while the purely musical moments are quite interesting, the way the interviews give form to the movie only puts light on the fact that neither Bridgeman nor Fainchtein had an idea of what Mexicanity is. And while as a foreigner Duncan Bridgman could had offered an interesting perspective at watching Mexico from afar, he instead opts for the cliché, the common places and portraits Mexico as a mere tourist would do.

Certainly, director Duncan Bridgeman has a great talent as musical producer, talent that he has already shown in "1 Giant Leap" and that once again he exploits to the max in "Hecho en México". However, the main difference between his previous "1 Giant Leap" and this film is that the former is a project without any pretensions beyond the music, the ambitious documentary "Hecho en México" tries to define a complex question and fails completely at it. The ideas exposed, in an attempt at being rebellious and irreverent, end up being ridiculous and maudlin, which wouldn't be that bad if it wasn't for the fact that in the end they say nothing. Shallow, empty and without an identity of its own, "Hecho en México" is sadly a movie that can only be enjoyed as a postmodernist display of Mexican music, because as a proper documentary it's a complete failure.