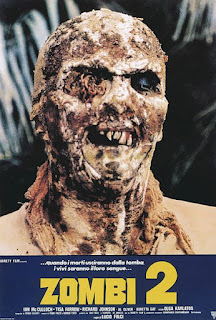 In 1978, ten years after having revolutionized horror cine with the classic film "Night of the Living Dead", American filmmaker George A. Romero would return to the subgenre of his creation with a new zombie film: "Dawn of the Dead". The success of his new epic about the living dead was astounding, particularly in Europe, where director Dario Argento had distribute it under the title of "Zombi". The success of "Dawn of the Dead" was so huge that soon the Italian film industry would try to capitalize the zombie genre, and the most famous of those attempts was the retitling of a modest horror film that was being produced at that very moment, under the command of a filmmaker better known for his comedies, westerns and gialli (thrillers), Mr. Lucio Fulci. While released with the not so subtle title of "Zombi 2" (in the United Kingdom the title was "Zombie Flesh Eaters" and in America simply as "Zombie"), Fulci's film would depart from Romero's canon by its inclinations to the supernatural and mainly, its more realistic graphic violence that Fulci had already employed in his gialli. Thus was the birth of the Italian zombie.

"Zombi 2" begins with a yacht apparently abandoned, drifting to the New York's coast apparently without crew. The coast guard arrives to the scene in order to investigate when a monstrous decomposed body attacks them. After this event, Ann Bolt (Tisa Farrow) is questioned by the police, as she recognizes the ship as being owned by her father (Ugo Bologna), whom had been missing. At the ship, Ann finds a note from her father, discovering that he is at Matool island; so with this in mind she decides to follow the clues and find out what's happened. To do this, Ann recruits the help of journalist Peter West (Ian McCulloch) when he offers to help her in exchange for the exclusive rights to publish the story. The two head for the tropic, where with the help of a local couple, Bryan Curt (Al Cliver) and Susan BAttett (Auretta Gay), find the Matool island. However, they realize that the island is curse, and the dead rise to devour the living. At the island they'll meet Dr. David Menard, who has been doing research about the mysteries behind the curse of Matool island.

Written by Elisa Briganti and Dardano Sacchetti (who had previously worked with Fulci in the giallo "Sette note in nero"), "Zombi 2" really has very little in common with "Dawn of the Dead", as even when Filci's film follows the general rules established by Romero in his "Night of the Living Dead", the creatures in "Zombi 2" are closer to their roots in mysticism and the supernatural than Romero's ghouls. The monsters in "Zombi 2" are ancient corpses, reanimated by a strange curse that makes them rise and exterminate the inhabitants of the island of Matool. Certainly, while it's probable that neither Briganti nor Sacchetti had intended to include a social commentary in "Zombi 2", it is interesting to point out that the story makes a stark contrast between the main characters (all coming from the first world) and the islanders, who live under the scourge of disease, poverty, superstition and now the zombies. In fact, "Zombi 2" has a constant atmosphere of decay and despair in its plot, which director Lucio Fulci manages to translate successfully to the screen.

And this atmosphere of dread is perhaps the greatest achievement of Lucio Fulci in "Zombi 2", as he manages to transform this tropical paradise in a true zombie apocalypse, where the rotting corpses attack with a terrifying brutality. The chief characteristic in Fulci's brand of horror in "Zombi 2" is precisely his very creative use of violence, displayed in several sequences that are as imaginative as they are explicit, making them both fascinating and repulsive at the same time. A lot of the visual power contained in the gory violence of "Zombi 2" rests in the talented work of make-up artist Giannetto De Rossi, who was in charge of bringing to life the decidedly realistic vision of Fulci, and created many of the most powerful images in Italian horror. The contrast between graphic violence and the natural beauty of the island is captured by the eye con cinematographer Sergio Salvati, who makes an effective job and with Fulci, generate this atmosphere of constant desolation that the film has. In a way, while Romero is the creator of the subgenre, Fulci's "Zombi 2" is the film that defined it.

Unfortunately, one of the biggest problems in "Zombi 2" is the uneven quality of the acting through the film, made even worse by the low quality of the dubbing done for the film (dubbing was a common practice in Italian cinema of its time). Actress Tisa Farrow (sister of Mia Farrow) doesn't do a bad job, and as the protagonist Ann Bolt, she manages to carry the film with her talent despite not having a very developed character. Unfortunately, the same can't be said of Scottish actor Ian McCulloch, who looks a bit stiff in his role, yet still somewhat acceptable in his role. Actor Richard Johnson (famous in the horror genre for the classic "The Haunting"), shows a bit of overacting, but that exaggeration is an important part of the obsessive nature of his character, desperate to find a rational explanation to the zombie outbreak. The rest of the cast is less fortunate (particularly Olga Karlatos), though the always reliable Al Cliver (familiar face in Italian horror) has some very good moments in his supporting role.

Despite its many virtues and is status as a classic of the genre, "Zombi 2" is far from being a perfect film, and some of its flaws are sadly quite notorious. The most obvious is perhaps the inclusion of a couple of scenes that can only be described as silly given the sharp contrast they have with the serious and raw tone of the film (exactly, the famous scene of the fight between the shark and the zombie is one of them). Besides this, it's necessary to admit that the screenplay has its fair share of holes and illogic situations that downgrade a bit the impact of "Zombi 2". It's very probable that the lack of care in the developing of the screenplay had been due to the urgency of the production company to release a film related to the successful "Dawn of the Dead". Nevertheless, it's worth to point out that after all, there are more good things than bad in "Zombie 2", and despite its problems, it's perhaps the most influential film that filmmaker Lucio Fulci made in his career (generating a style of making zombie films).

Violent, aggressive, yet owner of a strange charm, "Zombi 2" is an Italian classic that lives up to its reputation, and serves a the perfect introduction to the Eurohorror of the 70s. With its beautiful work of cinematography contrasting with the graphic explicit violence, it shows all the typical traits of Italian horror with brutal intensity. "Zombi 2" was a landmark in the career of Lucio Fulci, whom after the film would become a real icon of the horror genre, making a couple of masterpieces of horror cinema later in his career. While it probably will always live under the shadow of Romero's "Dawn of the Dead" (impossible to talk about one without mentioning the other), the truth is that the influence of "ZOmbi 2" still reigns supreme to this day.