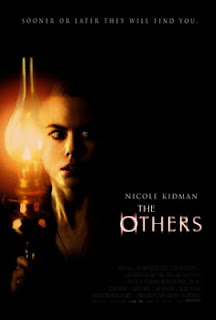 In 1996 a young 24 years old man named Alejandro Amenábar broke into the Spaniard film industry with his feature length debut "Tesis". The film, which was a horror story about snuff videos, would end up winning seven Goya awards and quickly became a classic of the Spanish horror that was on the rise at the moment. "Tesis" was followed by "Abre los ojos" in 1997, a science fiction film that would impress American actor Tom Cruise so much that he would buy the rights to produce a remake with the name "Vanilla Sky" in 2001. As part of the deal, Cruise would produce a movie for Amenábar, allowing him to enter the American industry. Amenábar began to develop a project, and found his inspiration in an old chapter of the British TV series "Armchair Theatre" that was essentially a ghost story and was titled "The Others". Taking the same title for his story, Amenábar began the production of a film of Gothic horror in the most classic style, pretty much akin to Jack Clayton's 1961 classic, "The Innocents". The result would be outstanding.

"The Others" is the story of Grace Stewart (Nicole Kidman) and her children Anne (Alakina Mann) and Nicholas (James Bentley), who live in a huge mansion in the British Crown Dependency of Jersey, during World War II. Anna and Nicholas suffer from a rare disease, xeroderma pigmentosa, which gives them extreme photosensitivity and forces them to live in the dark, so no light can enter the Stewart house. Strange events begin to take place in the house's rooms, when Anne begins to talk about seeing other persons in the house, including a kid named Victor. As this takes place, three servants arrive to the house looking for a job, they are Mrs. Bertha Mills (Fionnula Flanagan), the gardener Mr. Edmund Tuttle (Eric Sykes) and the young mute girl Lydia (Elaine Cassidy). Grace decides to hire them and explains them the very strict rules of her house, designed to protect her children from the light. Anne keeps talking about Victor, and soon Grace herself begins to experiment the unexplainable evens that Anne has been mentioning. Convinced that they aren't alone in the house anymore, Grace will try to protect her kids from the others.

With a screenplay written by Amenábar himself, "The Others" is, in a certain way, a ghost story done in a pretty traditional style. Firmly rooted within the Gothic horror subgenre, "The Others" has all the key elements of this type of stories, beginning with the huge mansion in the dark, isolated from society. However, something that separates "The Others" from most ghost stories (resulting from the huge influence it receives from Henry James' classic novel "The Turn of the Screw") is the strong emphasis that Amenábar places on his characters. Certainly, very strange things begin to take place in the Stewart mansion, however, the greatest danger seems to be not inside the house, but inside Grace's mind. Lost in uncertainty regarding the fate of her husband (who was sent to the war), Grace's state of mind begins to suffer the ravaging of a growing obsession with the safety of her children, which gets worse as she face the fact that Anne claims to have seen several strangers in her own house.

The refined classicism of the story is reflected in the style that Amenábar employs to craft his film. Opting for a slow and clam rhythm, Amenábar gives "The Others" an elegance and subtlety in its craftsmanship with recalls Jack Clayton's "The Innocents" (not a coincidence, as Clayton's movie is an adaptation of James' "The Turn of the Screw"). In "The Others", as in the classics of Gothic horror, the atmosphere becomes the most important element, and Amenábar focuses on developing a constant sensation of paranoia and suspense within the dark Stewart mansion. forced The darkness of the house, coupled with the loneliness and the uncertainty generate a mood of constant tension that Amenábar transmits through Grace's eyes. It's interesting that Amenábar, in the psychological focus he gives to ghost stories, rather than showing directly what is happening in the house, he narrates it through the expressions of his characters, particularly Grace. So, her eyes become true windows that allows us to gaze into the deep darkness of her mind.

As can be seen, Grace slowly becomes the center of "The Others" and, being this a film where the characters' psychology is so important, the performances by the cast become of enormous importance. Fortunately, Australian actress Nicole Kidman shows to be up to the challenge and delivers one of the best works in her career. Certainly, there are moments where Kidman shows a bit of a tendency to overact a little, however, in general her performance as Grace is charged with a restrained intensity that effectively transmits the fragile state of mind that her character has. As the mysterious Mrs. Mills, Fionnula Flanagan delivers an excellent job that serves as the perfect counterpart to Kidman's, establishing herself with a strong screen presence. Eric Sykes is a bit less fortunate, though his work as Mr. Tuttle isn't any bad. The film's surprise comes from the young actors Alakina Mann and James Bentley, whom deliver performances of great quality as the Stewart children, who try to live a normal life despite their disease.

Without a doubt, a lot of the ominous atmosphere that Amenábar creates in "The Others" is thanks to the excellent work of cinematography done by the veteran Javier Aguirresarobe. Taking great advantage of the darkness that reigns in the Stewart house (as the characters are afraid of sunlight), Aguirresarobe plays with shadows and sources of light to give a supernatural beauty to Amenábar's film. And yet, the technical perfection of the movie never overshadows its story, which is a wise choice by director Alejandro Amenábar, whom despite playing with several of the genre's classic conventions, never loses the focus on his characters. Amenábar makes an intelligent and honest film that without big pretensions, dwells in its characters' psychology without cheap devices and keeping true to the genre. While the film could be accused of being a tad simplistic (especially when compared to Amenábar's previous film, "Abre los ojos"), what Amenábar achieves in "The Others" is to take a very traditional kind of horror story to a nearly sublime artistic level.

Certainly, "The Others" is often noted by the final plot twists of its story, in the sense that it seemed as if the movie was a mere excuse to employ that twist. However, "The Others" is a lot more than a surprising plot twist, as just like the best films with this kind of endings ("The Usual Suspects" or "The Sixth Sense" for example), the twists is not the reason for the film's existence, it's just the icing on the cake that crowns a pretty satisfying story. That is, even when knowing the nature of the twist, the film doesn't lose a bit of its strength. And this is because Amenábar doesn't have this final twist as his only card, he begins to build a fascinating and engaging plot that gives good use to the best elements of the Gothic horror subgenre and makes a work of art out of them. A true heir of Clayton's classic film.