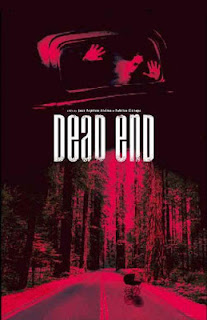 At the end of the decade of the 90s, the great commercial success of several horror films brought a renewed interest in the genre, which became some kind of a renaissance during the following decade. The horror genre was again a profitable product, to the point that even big studios began to produce horror movies to satisfy the demand, resulting in the making of many big budget remakes of several classic films of the genre (the perfect example: "The Texas Chainsaw Massacre" in 2003). However, and just like it had happened in previous decades, despite the huge amount of produced films, the quality wasn't always the best, and many of those films, whether they were remakes or not, ended up being pretty much forgettable. Nevertheless, a good thing that came with this popularity of horror films was the return of indie horror, which just like in previous occasions, would be where finally the most interesting films would be produced. "Dead End", a somewhat independent French-American co-production released in 2003, would be a great example of this.

"Dead End" is the story of a family trip, where the Harringtons are driving through the highway heading towards grandmother's house in order to spend the holidays there. In the car are traveling Frank (Ray Wise) and Laura Harrington (Lin Shaye), their daughter Marion (Alexandra Holden) and their son Richard (Mick Cain), as well as Marion's boyfriend Brad (Billy Asher). The dream and the nerves make Frank to almost collide with another car, so to alleviate tension, he decides to take an alternate road. Laura is upset by this, so they begin to argue again until Frank sees a woman in white (Amber Smith) carrying a baby through the woods. Frank returns to investigate if the woman is alright, as she seems hurt. The Harringtons decide to take her to a nearby cabin located a few miles back, in order to get her some help. The cabin looks empty, so Frank and Laura decide to investigate. Richard and Marion leave the car, leaving Brad alone with the strange woman, who shows him that the baby is dead. Whn they return, the family discovers that Brad is gone, and this is just the beginning of their trip through a dark road.

Written and directed by French filmmakers Jean-Baptise Andrea and Fabrice Canepa, "Dead End" presents an intelligent plot where the family problems the Harrington have come to the light as they keep on driving in this insane trip through the night. And this is precisely the greatest achievement of the films, as even when the story may not be the most original in horror, the way that Andrea and Canepa develop their characters is what ends up making the story interesting. Their hates, grudges and secrets are uncovered as the family tries to keep their sanity as they face he strange situations that take place on the road, and the deaths that begin to happen during their long voyage to madness. Mixing with great creativity the suspense with comedy, Andrea and Canepa create a story that moves with grace between the blackest humour and the classiest horror, without ever losing the right tone. The ending is perhaps a bit too predictable, but the truth is that what makes "Dead End" really special is the journey, not the destination.

In "Dead End", directors Andrea and Canepa leave aside the graphic violence of modern horror and instead they choose a style more based on atmosphere and suspense than in straight visual shock. With great skill, the filmmakers manage to create an effective feeling of paranoia as the Harrington discover that something is not exactly right with the road. Certainly, the descend to madness that this family experiences is a real nightmare, and the filmmakers truly create a very appropriate surreal atmosphere thanks to a well devised mise en scène that, as mentioned before, it's based more on suggestion than in showing. This last thing may had been the result of budgetary limitations, however, it's a wise choice as it allows the filmmakers to explore a kind of horror that's more psychological than visceral. While this may not really be the best work of cinematographer Alexander Buono, there's something in the style he employs in the film that reminds a lot to the supernatural horror cinema of the 80s (think "Phantasm"), and that the filmmakers use to their favor.

However, a lot of the success of "Dead End" depends on their actors, as it's a film based chiefly in its characters and the relationships between them. And fortunately, "Dead End" has excellent performances from the veteran actors Ray Wise and Lin Shaye. As the father figure in the Harrington family, Ray Wise makes a superb job at making a tough and aggressive character that hides an enormous fear to the horrors he is facing. Wise creates in Frank a very complex character, more complex than it shows, and while at times there's a bit of overacting on his part, in general his work in "Dead End" ranks amongst the best in his career. Actress Lin Shaye also delivers a work of great quality as his wife Laura. Playing a housewife full of secrets, Shaye makes a brilliant job, particularly shown in her timing for comedy, as it's her character the one that gives the film the touch of black humor to the plot. Young actress Alexandra Holden is perhaps less surprising, though she still makes an effective performances as the story puts her on the spotlight.

Nevertheless, not everything is perfect in "Dead End" and unfortunately, the acting done by Amber Smith and specially Mick Cain downgrade the quality of the film due to their bad quality. Cain in particular is pretty poor in his performance as Richard, and it doesn't really help the fact that his character is the less developed of the group. Despite those two details, the acting in "Dead End" is in general pretty satisfying, and one of its strongest assets. If the film has any problem, that is the fact that the film can become a bit slow and repetitive as the movie consists mainly in the family driving through a dark road. It's true that Andrea and Canepa's screenplay keeps things rolling with a good rhythm and well scripted dialogs, but "Dead End" would had been improved if more situations took place in its plot diminish the moments where nothing happens. It's worth to point out that even when "Dead End" was done with a relatively low budget, directors Andrea and Canepa manage to avoid this to be too obvious and keep the attention on the story.

Intelligent, disturbing, and with a very twisted sense of humor, "Dead End" is a film that offers somewhat of a return of a more traditional kind of horror. Thanks to the remarkable performances of Wise and Shaye, as well as the great use of atmosphere that directors Jean-Baptiste Andrea and Fabrice Canepa achieve, "Dead End" is an experience of paranoia and suspense akin to some of the best moments of "The Twilight Zone". Despits is flaws, this film once again demonstrates that with a good screenplay, it's possible to make a film of high quality even when resources are limited. And as mentioned before, while it's probable that its ending is a bit predictable, what's truly enjoyable in "Dead End" is the Harrington's descent to the dark side of the road.

Hi I'm Heather! Please email me when you get a chance, I have a question about your blog! LifesABanquet1(at)gmail.com