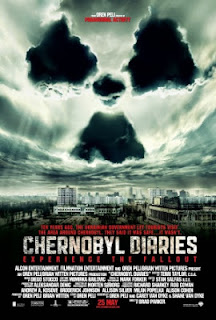 On April the 26th, 1986, one of the greatest nuclear catastrophes in the history of mankind took place, the explosion of the nuclear reactor of Chernobyl, in the then Ukrainian Soviet Socialist Republic. Considered as the worst nuclear disaster in history, the explosion at Chernobyl launched enormous amounts of radioactive contamination to the atmosphere, provoking the evacuation of the nearby area, particularly the town of Prypiat, where the families of the nuclear plant workers were living. Years went by, the Soviet Union disappeared, but Prypiat remains exactly as it was abandoned; and now, more than 20 years after the tragedy, the nuclear contamination has descended to levels that make possible to visit this ghost town, desolated relic from the Soviet era. This touristic expeditions to the abandoned Prypiat served as inspiration to filmmaker Oren Peli (of "Paranomal Activity" fame) to write a horror screenplay, "Chernobyl Diaries", which has been taken to the big screen with Peli as producer and the débutant Bradley Parker at the helm.

"Chernobyl Diaries" begins with images of a trip through Europe done by Chris (Jesse McCartney), his girlfriend (Olivia Taylor Dudley) and their friend Amanda (Devin Kelly), who has just broken with her boyfriend. Chris' plan is to propose to girlfriend when they reach Moscow, their final destination. Their trip takes them to Kiev, Ukraine, where they meet Paul (Jonathan Sadowski), Chris' brother, who offers them to change their route a bit and do something of "extreme tourism". Paul's plan is to visit Prypiat, the ghost town evacuated near the Chernobyl plant. Chris refuses to go, but finally he gives int, convinced by Natalie and Amanda, who find the idea very attractive. The four friends take a tour organized by an ex-military man named Uri (Dimitri Diatchenko) where they meet Australian Michael (Nathan Phillips) and his girlfriend Zoe (Ingrid Bolso Berdal). Arriving to Prypiat, they are marveled by a place forgotten by time. However, soon they'll realize that they aren't alone in the desolation left by the Chernobyl disaster.

The story developed by filmmaker Oren Peli was adapted to the big screen by screenwriters Carey and Shane Van Dyke, collaborating with Peli himself. While the premise of "Chernobyl Diaries" does reminds a lot to Wes Craven's 1977 film "The Hills Have Eyes" (and its 2006 remake by Alexandre Aja),the movie has a greater focus on suspense instead of graphic violence, and leaves in the mystery the nature of the ones hunting the group of young tourists. In a way, this gives to "Chernobyl Diaries" a tone akin to the one found in a zombie movie, as there is not a properly defined villain in the film (like for example, Craven's savages), but the characters face a horde of mysterious nameless creatures that lurk in the darkness. Certainly, this forces the story to be focused on the main characters and the relationships between them, particularly in the bitter rivalry between siblings Chris and Paul. Unfortunately, Peli and the Van Dykes are unable to properly develop this key aspect of the story, leaving them a tad shallow.

Debutant Bradley Parker manages to create quite an interesting atmosphere of desolation in his "Chernobyl Diaries", really taking advantage to the setting of the story and the remarkable work of cinematography done by Morten Søborg. In "Chernobyl Diaries", Parker and Søborg truly capture the strange and melancholic beauty of Prypiat, generating an ominous sensation of abandonment and dread. Given the presence of Oren Peli as the film's producer, it could be expected that "Chernobyl Diaries" was a found footage film; nevertheless, director Bradley Parker distances himself from Peli in terms of style and opts to have a more traditional narrative in his movie. Despite having previously developed his career as a visual effects supervisor, Parker gives greater importance to the atmosphere and suspense to develop his film, and truly knows how to play with shadows and to use the darkness to his advantage. Søborg's camera flows dynamically through Prypiat following the action, giving the sensation of being with the characters, in a way quite reminiscent to the horror survival video games.

The performances in "Chernobyl Diaries" are of an uneven quality, as while there are some effective works, there are also a couple that are unfortunately regrettable. Sadly, to the latter belongs the one done by Jonathan Sadowski, whom playing Paul, becomes the de facto protagonist during great part of the film. Sadowsky looks stiff and wooden in his performance as Paul, and while the conflict his character has with Chris opens the door for a couple dramatic moments, Sadowski fails to exploit them in any way. Devin Kelly, whom also has a key role, is in the same boat as him, being unable to give her character a defined personality and leaving her as the most stereotypical final girl cliché. Quite a difference is the work of Jesse McCartney, whom truly manage to create a convincing character despite the very few chances the screenplay gives him to do it. The same case for Dimitri Diatchenko, who makes a very effective job as the funny strongman Uri. The rest of the cast is pretty much average, though it's worth to point out that the screenplay doesn't give them much chance to shine.

And that's definitely the main problem in "Chernobyl Diaries", as since it presents a story focused on its characters, the ideal would be that said characters had well defined personalities that made attractive to the audience. However, what Peli and the Van Dyke have created is a group of shallow and void characters, that seemed to lack any identity beyond their professions and nationalities. On top of that, the plot resorts a bit too often to clichés (which wouldn't be that bad if the film had better characters), moving from one common place to the other without truly taking advantage to its premise. Certainly, director Bradley Parker achieves a film that's visually very attractive, though it would had been preferable to have him put on the screenplay the very same effort he put to the film's visual design. Something of interest: instead of having the bullied character, Chris, as the protagonist (the perennial underdog), the writers instead put the bully Paul on the spotlight, resulting in a not very interesting (and often annoying) main character.

While it would seem like it, "Chernobyl Diaries" isn't really a complete disaster, as it does have its fair share of pretty interesting moments, mainly during the first half and thanks to Parker's choice of giving atmosphere and mood an important role in his movie. However, this doesn't stop the film from being a failed experiment in which once again it's proved that a poorly developed screenplay doesn't give much chance to be translated into a good movie. Certainly, the newcomer Bradley Parker shows a lot of promise at rescuing the somber atmosphere that the story inherently has; unfortunately, this isn't enough to save a plot that sadly falls deeper in tedium and boredom as it unfolds. In fact, "Chernobyl Diaries" is not really bad, just painfully mediocre.