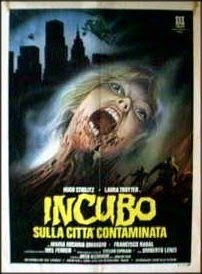 Without a doubt one of the key moments in the history of Italian horror took place in 1978 with the release of American filmmaker George A. Romero's "Dawn of the Dead". Distributed by Dario Argento with the name "Zombi", the film became a total success and the Italian film industry saw in Romero's zombie epic the path to follow in the making of new horror films. So, the following year would see the release of "Zombi 2" by director Lucio Fulci, and even when it had nothing to do with Romero's film, it was named that way to capitalize in the success of "Dawn of the Dead". Applying the classic stylization and aggressive violence of Italian horror, "Zombi 2" also was a great success, so soon more films about the living dead began to appear, copying the model established by Fulci. Italian horror was gaining new force thanks to the zombies, but just like it happened before to Spaghetti Weseterns, the clones rarely reached the level of quality of the original. "Incubo sulla città contaminata" is a classic example of this, as it's closer to involuntary comedy than to true zombie horror.

Known in America as "Nightmare City" (though the literal translation is "Nightmare in the contaminated city"), the film begins when reporter Dean Miller (Hugo Stiglitz) is assigned with the job of interviewing Dr. Otto Hagelberg, famed scientist who designed a nuclear plant where a damage has been reported. Miller goes to the airport to wait for Hagelberg's arrival, when a an unidentified plane makes a forced landing in one of the runways. When the local police surrounds the plane, Miller gets closer to watch the facts. The door is opened and a group of mutant zombies comes out from the plane, armed with axes and knives. A bloody battle begins between the police and the zombies, while Miller manages to escape without being seen. Desperate, Miller tries to warn the population about it, but he is stopped by General Murchison (Mel Ferrer), who doesn't allow the news to be known. The plague spreads, and Miller decides to find his wife Anna (Laura Trotter) to the hospital where she works, in order to escape from the city that has become a nightmare of death and destruction.

Written by veteran Piero Regnoli collaborating with Antonio Cesare Corti and the Spanish writer Luis María Delgado, "Incubo sulla città contaminata" isn't technically a zombie film, as the creatures that it shows are radioactive mutants with a taste for human flesh and the necessary lucidity to handle weapons and drive vehicles. Nevertheless, the story follows closely the classic pattern of a zombie movie, with the main characters trying to survive in the middle of the chaos that engulfs their city as the plague spreads and society begins to crumble. The story does handle several interesting ideas, like for example its heavy handed ecological message, its clearly anti military stance and its use of intelligent and agile zombies as the monsters of the film (predating the running zombie of modern films). Unfortunately, those ideas are lost in a screenplay plagued with holes, incoherence and a bunch of characters making illogical actions, that more than once result in absurd situations of great involuntary comedy.

The execution from director Umberto Lenzi (famous for his cannibal horror film "Il paese del sesso selvaggio") doesn't help much to solve this big problem, on the contrary, the poor craftsmanship the film has make even more ridiculous the situations that take place in "Incubo sulla città contaminata". Nevertheless, if there's anything worthy of recognition in Lenzi's work is the fact that he keeps action a constant in the film, with a frantic rhythm that avoids tedium. Despite the low quality of the whole production, Lenzi achieves to make a couple of quite effective scenes where his eye for mise-en-scène. These are the attack to the dances at the TV station, and the big attack to the hospital, two scenes where Lenzi manages to transmit the atmosphere of chaos that the story has. Sadly, Lenzi fails to keep this level of quality through the film, and "Incubo sulla città contaminata" ends up filled with technical problems, that range from an awful work of make-up to a pretty uneven editing, not to mention a somewhat mediocre cinematography (by Hans Burman, whom years later would do the cinematography for the film "Tesis").

The acting in the film is another of the biggest problems in "Incubo sulla città contaminata", as in general the quality in this element is pretty poor. Leading the cast is Mexican actor Hugo Stiglitz, playing reporter Dean Miller, and actually his work isn't that bad. While he lacks the classic image of the hero, Stiglitz manages to transmit an intensity pretty appropriate for his desperate character, and he is perhaps the only actor in the film taking the movie seriously. Mel Ferrer, with his days of "Scaramouche" (1952) long gone, makes an uninspired turn as General Murshison, as if he wasn't really interested in the resulting film. The same can be said of Spanish actor Francisco Rabal, who had the main roles in Luis Buñuel's classics "Nazarín" and "Viridiana", and in this film makes a pretty poor performance as Major William Holmes. Nevertheless, if the acting from those actors looks pretty average, the rest of the cast is completely awful, beginning with the work of Laura Trotter, whom seemed to base her entire performance in screaming constantly.

With a terribly awful screenplay, mediocre acting and a craftsmanship that leaves a lot to be desired, it's hard to recommend "Incubo sulla città contaminata" as a good example of Italian horror cinema, as even when compared to other films of its time it's still a pretty bad movie. However, if there's anything that Lenzi has achieved in "Incubo sulla città contaminata", that is the film's skill to avoid falling in tedium. Despite its many flaws (or perhaps due to them), the film ends up being a quite funny experience, though one that's probably not everyone's cup of tea. The truth is, if one's looking for true horror cinema of good quality, the best that one can do is to search somewhere else; but if what one's looking is a piece of involuntary comedy, "Incubo sulla città contaminata" from director Umberto Lenzi could actually be a pretty good choice.