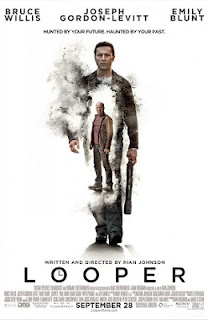 Way before British author H.G. Wells made popular the idea in his classic science fiction novel. "The Time Machine" in 1895, stories about time travel had already been an integral part of our imagination, going back to the beginnings of civilization (time travel even appears in Hindu mythology). And this is because at their core, this kind of science fiction opens the possibility of answering a question that has always fascinated us, perhaps even more than any other futurist vision: Is it possible to change the past? The many implications of this question, which range from the creation of paradoxes to questioning the existence of fate, have resulted in many works of fiction that explore the consequences of time travel to the past. This interesting question is tackled in "Looper", a science fiction movie written and directed by American filmmaker Rian Johnson (who rose to prominence in 2005 with his neo-noir film "Brick"), where in the future, the novelty of time travel is used for a very interesting purpose.

In "Looper", the story is set in the year 2044, in Kansas, where Joseph Gordon-Levitt plays Joe, a young man with a quite particular job: he is in charge of killing people sent from the future by the criminals of those years.Time travel, inexistent in 2044 but invented thirty years later, is used in this way by the future mafia to get rid of their enemies due to the difficulties of doing it in their time. However, the rules specify that eventually, one day Joe will have to kill his future self, closing in that way his contract (or "loop") with the chance of retiring until the time comes for him to be sent to the past. That's why he is called a "looper". The day of closing his loop arrives for Joe, but when his future self (Bruce Willis) arrives, Young Joe is surprised by Old Joe whom avoids being killed and runs away. Since he let his future self escape, Joe becomes the target of the mafia, so he'll have to find and kill Old Joe before the mafia catches him. At the same time, Old Joe will have to solve a business in the past while he avoids getting himself or Young Joe killed, as that would result in his own death too.

As mentioned before, the screenplay was written by director Rian Johnson, whom presents an action and science fiction film with a quite original premise. In "Looper", Johnson develops an intelligent screenplay, which takes the often problematic concept of time travel and takes it as the basis to elaborate not only a thrilling story of futuristic criminals, but really a full-fledged tale of self discovery. Young Joe, arrogant and selfish, faces an Old Joe who knows quite well what will be the future of the life of death and drugs that Young Joe is currently living. In full Philip K. Dick style, Johnson is using the usual genre conventions of science fiction to express a more personal, more intimate conflict: the struggle of the protagonist against his inner demons. And this is perhaps the main characteristic of Rian Johnson's "Looper", as it chooses not to worry too much about the intricate technical complexities of time travel and, wisely, opts for focusing chiefly in developing his group of characters and the relationships between them.

This preference towards the interior instead of the exterior is reflected in the visual conception of the future that director Rian Johnson displays in "Looper", as instead of making an extravaganza of futuristic imagery in his movie, what "Looper" shows is a future closer to our reality, that is, closer to the current patterns regarding fashion and technology, resulting in a somewhat realistic vision of the world of tomorrow. The changes that the future shown in "Looper" displays, instead of technological, are more related to the society that inhabits the Kansas City of the year 2044, a society without law, where the crime runs rampant and death is on every corner. Johnson brings to life this urban nightmare with great imagination (and with the great job of art director James A. Gelarden), focusing in classic aspects of Americana mixed with his own brand of science fiction. The cinematography by Steve Yedlin manages to capture this familiar Midwestern atmosphere, that gives the movie a very distinctive personality of its own.

Acting is of pretty good quality, starting with a Joseph Gordon-Levitt that once again shows his talent to play ordinary persons in extraordinary situations. As Young Joe, Gordon-Levitt plays a young man without anything to lose and totally determined to live a short but luxurious life in exchange of killing people for the mafia, though this showdown with his own self will make him think twice about what the future has for him. Perhaps a problem of his performance is that at times it seems he tries too hard to imitate Willis. While recalling at times his character in "Twelve Monkeys", Bruce Willis makes an excellent performance as Old Joe, in what is probably one of the best works in his career. The advantage of course is that in "Looper" his character allows him to explore more emotional aspects that at times move him away from his image of tough guy, that is, allow him to enter the pain that this time traveler experiments. The rest of the cast keeps the same level of quality, excelling specially Paul Dano as Seth, and Jeff Daniels who makes a terrific job as mafia boss Abe.

Creative, intelligent and pretty original, "Looper" is a great work of science fiction in which director Rian Johnson gives good use to the concept of time travel to create an action film with a pretty interesting subtext. Certainly, Johnson makes the most of his premise and develops a quite entertaining story from it bu, unfortunately, "Looper" is not without its problems. First of all, while Johnson tries to consciously avoid to give details about the film's future (2074) and about time travel itself, some bits of information could had been given to better explain some concepts in the film, as in more than one occasion there's the feeling that time travel is just an excuse to begin the story (and while that's perfectly OK, it shouldn't be that obvious). Poorly developed details such as the fact that the premise rests in the weak concept of having the mafia to prefer to send people to the past instead of killing them, makes "Looper" to lose some of its strength. Finally, the film can't avoid to attract the inevitable comparisons with "The Terminator" and the aforementioned "Twelve Monkeys", which don't give it any good.

Anyways, in spite of its flaws, in "Looper" filmmaker Rian Johnson presents a style of science fiction that shows itself as intelligent, courageous and willing to experiment; three characteristics that have defined the cinema of Johnson ever since the beginning of his career (as shown by his quite particular approach to noir with "Brick" and comedy in "The Brothers Bloom"), and that set him apart as one of the most interesting directors of the early twenty first century. With an interesting premise and full of exciting action scenes, "Looper" is without a doubt one of the best science fiction films released in the year 2012.