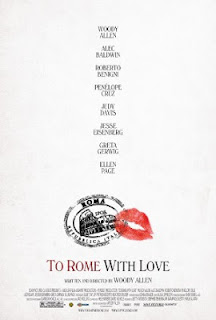 Rome, the Eternal City, owner of an ancient history and an extraordinary rich culture, is a city that has been pictured on film on countless occasions, being the background of several classic films. Now Rome becomes the setting of American filmmaker Woody Allen's 43rd film, whom after making the charming comedy "Midnight in Paris", moved to the capital of Italy after the invitation of Medusa Distribuzione, a distribution company company that offered to finance a film for him under the condition that the resulting film was set in Rome. So, that was the origin of a project originally titled "Bop Decameron", but after several changes would end up being titled simply as "To Rome with Love"; where following the path set by his previous "Vicky Cristina Barcelona" or the already mentioned "Midnight in Paris", the New York filmmaker Woody Allen takes the little corners of the city as the background for a new exploration of his familiar themes. However, unlike those two films, "To Rome with Love" may be an slightly less polished light comedy, though that doesn't make it any less interesting.

"To Rome with Love" narrates four stories where the only thing in common is the fact that they take place on the streets of Rome. In the first one, Jerry and Phyllis (Woody Allen and Judy Davis) are a marriage traveling to Rome in order to meet their future son-in-law Michelangelo (Flavio Parenti), who knew their daughter Hayley (Alison Pill) during her last vacations. Things get complicated when Jerry discovers that Michelangelo's father Giancarlo (Fabio Armiliato) has an extraordinary (and wasted) gift for singing opera. The second story is about Leopoldo (Roberto Benigni), a typical office worker who one day becomes a celebrity for no apparent reason, taking him to experience the problems that come with fame. The third involves young student Jack (Jesse Eisenberg), whom is in the middle of a crisis when he falls in love with his girlfriend's (Greta Gerwig) best friend, the extroverted actress Monica (Ellen Page). Finally, the fourth tale deals with Antonio (Alessandro Tibero) and Milly (Alessandra Mastronardi), a recently married couple whom discover Rome's delights when they are accidentally separated.

As expected, the screenplay is a piece written by Woody himself, so it's not exactly a surprise to once again find that his familiar themes are all over it: nostalgia, love, death, neurosis and relationships. However, and while the stories of "To Rome with Love" aren't related between them, they all have in common the greater common theme of fame and fortune: Jerry wants to succeed as a producer through Giancarlo's voice, Jack is looking to revolutionize architecture, Antonio wants to make a good impression in business, and finally, Leopoldo deals directly with the mysteries of being a celebrity. Something interesting about the stories found in "To Rome with Love" is that in general the four of them have several lovely nods to the oeuvre of one of Woody Allen's greatest heroes: legendary filmmaker Federico Fellini. This is particularly obvious in the case of Antonio and Milly's story, which works as a charming extrapolation of the plot of Fellini's very first film, 1952's "Lo sceicco bianco" ("The White Sheik").

In "To Rome with Love", director Woody Allen once again showcases his skill to get deeply into the life of a city and uncover its many different faces. It's true that unlike some filmmakers (Wim Wenders for example), Allen never leaves completely the American tourist's perspective when portraying a city in his films, however, Allen is not exactly a very typical American tourist, but one who truly enjoys taking the camera of cinematographer Darius Khondji to capture a city vibrant with life, from the classic touristic spots to the lesser known places. Khonji's work regarding this aspect is without a doubt of high quality. However, the real challenge of "To Rome with Love" is to be able of developing the four different stories that make the film, while keeping the appropriate rhythm for his overall narrative. And while in general Allen does a good job at handling this, his work is not without its problems, as at times the jump from story to story is a bit harsh, a bit forced, breaking the agile rhythm that Allen's comedy usually has.

But where "To Rome with Love" truly shines is in the performances done by its cast, which are in general of a great quality. Jesse Eisenberg and Alec Baldwin deliver the best performances in the film, both in the story of Jack, where a quite interesting dynamic of mentor-disciple is somehow formed between them. In the same story, Ellen Page would seem like a bad choice to play Monica, but Page manages to make the character her own and finally delivers a pretty solid work of acting. In Leopoldo's story, Roberto Benigni delivers a surprisingly restrained performance, a contrast to his usual self; however, he is equally as funny as ever and his work is what saves his segment, which is unfortunately amongst the weakest in the film. In Antonio's segment, a great surprise is the work of Alessandra Mastronardi as the not so naive Milly, and the inclusion of Penélope Cruz in the same story is more than welcome. In his return ti acting, Allen still looks fresh and skilled in his performance, though wisely, he gives more room to the rest of the cast to shine.

Films dealing with multiple story lines tend to have problems with the rhythm of their narrative, and unfortunately, "To Rome with Love" isn't an exception. As mentioned before, there are moments in which this is lost when Allen moves between its different plot lines, resulting in scenes that could be shorter, scenes that could be longer, and some oddly harsh cuts between them (editing in general looks as if it had been rushed). Nevertheless, and while the work of editing isn't that effective, the root of the problem is perhaps in a script where not every story has been so throughly developed. While Jack's story is a superb modern fantasy dealing with nostalgia, Jerry's story suffers from a little excess of melodrama while Leopoldo's seemed a tad forgotten amongst them. This last story presents a quite interesting premise that seems that couldn't be explored at all, as while its by far the funniest of them, there's the feeling that it should had been a bit longer (while Antonio's could had been shorter). Leopoldo's story is saved thanks to the charm and talent of Roberto Benigni.