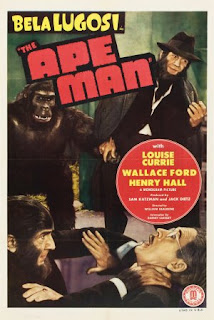 Truly a real icon of the horror genre, Hungarian actor Bela Lugosi was immortalized when he played the legendary vampire, Count Dracula, in the film adaptation directed by Tod Browning for Universal Studios in 1931. However, after the role that would take him to the top, Lugosi would face the problem of being type-casted as a horror villain, thanks in part to his heavy foreign accent. While at first Lugosi enjoyed constant work at Universal Studios, when the company decided to close the production of horror films, Lugosi saw himself forced to work in low budget films in the harsh world of B-movies. Working for Sam Katzman's Monogram Pictures during the decade of the 1940s, Lugosi would perform in films of regular quality, as his career was being forgotten by mainstream audiences. "The Ape Man", directed by William Beaudine and released in 1943, is a clear example of this, as it presents Bela Lugosi working under a badly done work of make up as the titular ape man. While it's worth to point out that, despite this, the Hungarian actor does a quite professional job.

"The Ape Man" begins with the arrival of Agatha Brewster (Minerva Urecal), a professional ghost-hunter, who's coming to the city after receiving the news of the disappearance of her brother, the famed scientist Dr. James Brewster (Bela Lugosi). Reporter Jeff Carter (Wallace Ford) is waiting for her, eager to get an interview, but unfortunately Agatha is in a hurry, and his attempt ends in failure, as even the photograph taken is a mess. The reason of Agatha Brewster's hurry is that Dr. Randall (Henry Hall), her brother's colleague, has informed her that James has not disappeared, but that after a tragic lab accident, he has been turned into an ape man. In the meantime, Jeff Carter receives the mission of making a proper interview with Mrs. Brewster, and much to his dismay, he is partnered with a new photographer, Billie Mason (Louise Currie). The team will try to find out why is Mrs. Brewster so secretive, but they'll discover the twisted mind of Dr. Brewster, whom is now desperate to find a cure for his condition, and with that in mind he's willing to do the unthinkable.

The screenplay for "The Ape Man" was written by Barney A. Sarecky, taking as basis a story by Karel Brown, whom was a famous cinematographer of the days of silent cinema that later became a writer during the 30s, penning among others, the classic thrillers "The Man they Could Not Hang" and "Before I Hang". As in those films (by the way, both starring Boris Karloff), the main character is a scientist facing the tragic consequences of having experimented with himself. Being a victim of his own experiment, Dr. James Brewster has become a violent sociopath interested only in his own recovery. Certainly, this makes Dr. Brewster a quite interesting character, but Sarecky's screenplay opts to leave him aside in favor of the couple made by Carter and Mason, the classic wisecracking reporters that were so common in horror films during the 30s and 40s. It may seem as if with this choice, "The Ape Man" was now turned into a pretty ordinary film, but actually Sarecky's screenplay generates interesting dynamics between the two reporters, playing with Carter's uneasiness at having a woman in his team.

The role of director is taken by the veteran b-movies filmmaker William Beaudine, whom by then already had the reputation of being an efficient and practical craftsman. However, this emphasis on practicality often resulted in a sacrifice of the film's quality in general, not to mention the downplaying of other artistic values. And unfortunately, "The Ape Man" is a clear example of this, as while the screenplay isn't really a bad idea, Beaudine limits himself merely to shoot the film without caring too much for creating atmospheres or a particular emotion with it. Beaudine's style is quite conservative, and while it may be a style that could work in less fantastic melodramas (in fact, the screwball comedy between the reporters actually works just fine), "The Ape Man" would had been benefited by a more creative approach from the director, more willing to take risks and innovate. The result is that "The Ape Man" is ultimately a lot less interesting that what could had been, with a pretty slow rhythm only improved by the good performances the film has.

And that's because if there's something valuable in "The Ape Man" is that in general it has a good amount of pretty good performances (in comparison to other B-films of its time). First of course is Bela Lugosi, whom despite having a badly done work of make up in his face, does a pretty professional job as Dr. Brewster, turned into a being half man half ape. There's a certain care in the way that Lugosi creates his character, as rather than making a mere caricature of an ape, Lugosi makes a restrained, perhaps even subtle performance out of it. Wallace Ford, famous for his role in Tod Browning's "Freaks", shines with his particular charm and comedic talent in his role as wisecracking reporter Jeff Carter. However, his character wouldn't be the same without his counterpart, Billie Mason, played with great talent by Louise Currie, the film's true surprise. Veteran actress Minerva Urecal isn't that lucky, and her performance as the sister of the unfortunate Dr. Brewster, Agatha, is a tad exaggerated and overacted.

The case of "The Ape Man" is definitely one of wasted potential, as amongst the many movies done about murdering apes (which were pretty popular during the 30s and 40s), this one is certainly amongst the best written. Scriptwriter Barney A. Sarecky balances quite well comedy and horror, and there are even some clever situations and pretty interesting moments through the story. However, William Beaudine's work as a director turns ordinary a tale that could had resulted in a remarkable film. As mentioned before, Beaudine's simplistic narrative manages to work well in the comedy scenes (which also are enhanced by the great chemistry between Ford and Currie), but not in the horror ones, which look even stagy in their execution. On top of that, the poor quality of the special effects truly harm the film, particularly the make up done for Bela Lugosi and Emil Van Horn (who plays an ape) is of an awful quality (though of course, with a better done work of cinematography, this could still had worked, with those flaws hidden in the shadows as in 1932' "Murders in the Rue Morgue").

There's no doubt that William Beaudine's working style was pretty functional for film studios eager of having new material to show in little time (in fact, that's precisely the reason why Beaudine would later work in television), however, films like "The Ape Man" certainly deserved a bit more of care in its making. There are many good and interesting elements in "The Ape Man" (the cast for example), but they are inevitably overshadowed by the uninspired work of director Beaudine, who merely translates what's on the script to the silver screen without putting any emotion in it. Finally, a film that could had been quite entertaining, ends up looking a bit silly, slow and even boring. "The Ape Man" isn't really a bad film per se, but it's truly a pretty average one, and it leaves the sensation that the story deserved something better. The work of Currie, Ford and Lugosi certainly deserved better.

Ahh yes, the desperate years of Bela Lugosi. "how much money do you think it will take for Bela to act like a monkey for an ENTIRE film?" Enough money, that's how much. Truly a film that shows how Hollywood can spit you out as fast as it can chew you up.

"Desperate years" indeed. I wonder how he must have felt, specially if that story of him quiting "Frankenstein" on the basis of the make-up.
There should be a Lugosi biopic...

Nice to read from you!