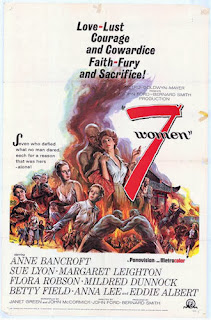 Widely regarded as one of the greatest masters in the history of cinema, American director John Ford left a remarkably rich legacy through his long and prolific career in the movies. While chiefly known as a director of Westerns (a genre to which he contributed several masterpieces such as "Stagecoach", "My Darling Clementine" or "The Searchers", to name a few), John Ford's body of work shows a quite versatile filmmaker, able to tackle very diverse types of stories. Unfortunately, that other side of Ford's oeuvre has left a bit overshadowed by the great success of his classic Westerns, but nonetheless it's an interesting facet that's well worthy of checking out. The perfect example of this is "7 Women", the film that closes John Ford's career as the last feature-length fiction film that he would do in his life (his final work would be a documentary, "Chesty: A Tribute to a Legend" in 1970). Being a movie completely focused on a group of female characters, it would seem that this movie is a tad unusual for the legendary director of Westerns, but the truth is that this is actually the perfect farewell from one of cinema's masters.

Set in Chine, in 1935, "7 Women" deals with the tribulations that are lived by the staff at a Christian mission in a remote region in the north of China. Lead by the strict Ms. Agatha Andrews (Margaret Leighton), the staff consists of Andrew's assistant, Ms. Argent (Mildred Dunnock), professor Charles Pether (Eddie Albert) and his wife Florrie (Betty Field), and last but not least, the young Emma Clark (Sue Lyon). At the mission there's the expectation for the arrival of the new doctor, as the situation in the region is difficult with the rumors of attacks by the notorious bandit Tunga Khan (Mike Mazurki). However, to the shock of everyone at the mission, the new doctor is actually a woman, Dr. Cartwright (Anne Bancroft), and it doesn't take much time before Dr. Cartwright's cynicism and open despise for religion collides with the Ms. Andrews' authoritarian personality. Despite this, Dr. Cartwright will prove to be of great help, having to deal with problems such as Mrs. Pether's advanced pregnancy, and the outburst of plague amongst the mission's population. However, her greatest challenge will come with the arrival of Tunga Khan to the mission.

Written by Janet Green and John McCormick, "7 Women" is an adaptation of a short story titled "Chines Finale", written by Norah Lofts (the story had already been adapted to television as part of the "Alcoa Theatre" TV series in 1960). The core drama in "7 Women" is centered mainly in the conflict between Ms. Andrews and Dr. Cartwright, using the contrast between their strong personalities as the basis to make a study on morality, religion and the relationship between them. While for Ms. Andrews' eyes the ways and behavior of Dr. Cartwright are irreligious and immoral at all accounts, ultimately the actions of the tough newcomer begin to prove themselves far more useful for the mission than the strict discipline preached by Ms. Agatha Andrews. As it can be seen, "7 Women" isn't much of an epic adventure in an exotic land, but an intimate character study where the conflicting personalities of the 7 women of the title are dissected, as when adversity comes knocking to their door, they must learn to collaborate despite their multiple personal differences.

In this his last feature-length film as a director, John Ford shows his masterful skill behind the camera at giving life to Lofts' story with a very appropriate and interesting subtlety. As mentioned before, despite the exotic location in which the story is set, "7 Women" works more as an intense drama of a more intimate variety, so director John Ford adapts his very particular style to really get into the microcosm that the mission represents. Ford leaves aside any attempt at visual flare (though Joseph LaShelle's work as cinematographer is brilliant) in favor of a greater focus in his characters. With an agile visual narrative, Ford portraits the mission's staff with great detail carefully developing their different personalities to the plot's benefit. In the end, Tunga Khan's attack is just another excuse to take to the limit the conflict between Ms. Agatha Andrews and Dr. Cartwright. Certainly, the main conflict was one of great interest for Ford, as even since his earlier classic, "Stagecoach" (1939), he had treated the complex theme of hypocrisy in religion's morality.

Naturally, given that "7 Women" is a film focused entirely on the relationships between the characters, the performances by the cast take a greater degree of relevance for the film's success. Fortunately, the acting in "7 Women" is of a superb quality, starting with Anne Bancroft completely taking over the screen as the witty Dr. D.R. Cartwright. While reportedly Bancroft wasn't the first choice for the role, her work is simply outstanding, managing to capture the complex personality of her character, a woman hardened by the frustration of living in a men's world. Her counterpart, Margaret Leighton, makes a fabulous job as Ms. Agatha Andrews, the strict and devoted leader of the mission. What's interesting about Leighton's performance is that she manages to avoid making of her character a caricature, as she conveys the complex subtleties that make her character human. Young Sue Lyon makes an acceptable job as Emma, who finds herself divided between her loyalty to Ms. Andrews and her admiration to Dr. Cartwright, whom she begins to see a role model (to Ms. Andrew's dismay).

At first sight, it would seem to be strange that director John Ford, whom basically helped to create the iconography of the wild west in his Westerns, would take the job of crafting a movie starring almost entirely women. However, "7 Women" is a film that in its themes is actually closer to John Ford's cinema than what one could thing at first: for starters, as in many of Ford's celebrated classics, "7 Women" deals with the conflict of different personalities forced to be together by the circumstances. Besides, Dr. Cartwright's has a lot in common with Ford's cowboys, being clearly outside the "normal" standards upholder by the proper "civilization". Cartwright is strong, smart and independent, so she means a direct threat to the concept of discipline and submission understood by Andrews (whom by the way, has a lot of sexual repression). The role that plays religion is also interesting, as Ford makes of "7 Women" a criticism to the hypocrisy of an arrogant, holier-than-thou attitude that judges based on moral prejudices instead of in the acts of sacrifice.

Certainly, such conflict was of great importance for Ford (a Catholic), given that "beliefs vs. acts" is a major argument between Protestants and Catholics. Now, "7 Women" isn't a movie absolutely without flaws (the most notorious being the fact that's pretty obvious that the film was shot entirely on a set), nevertheless, said flaws are completely overshadowed by the film's many virtues. Due to its unusual characteristics, "7 Women" is usually forgotten when discussion John Ford's filmography but, given its themes and style, the movie actually summarizes perfectly the totality of the work done by this great filmmaker. Gifted with great visual beauty, and intelligent screenplay and superb performances, "7 Women" closes masterfully the career of the legendary filmmaker. And if there's a doubt about it, one just has to check out the final scene of the movie, which is a farewell equally as beautiful as melancholic. The farewell of a master.