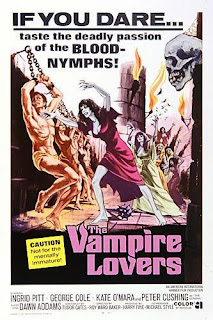 It could be stated that the 70s were a tough time for the legendary Hammer Film Productions, as after ruling the 60s with their trademark brand of lavish Gothic horrors, their classic formula was beginning to show its age, and on top of that, times were changing, and the company began to face strong competition from the new breed of grittier, edgier films that appeared in that decade. "The Vampire Lovers" is an attempt to spice things up a bit by adding an even stronger dose of eroticism to the Gothic horrors the studio was famous for. Ever since the release of "Dracula" (1958), Hammer Films had subtly played with eroticism in their productions, but "The Vampire Lovers" would be a step ahead. The experienced Roy Ward Baker (of "A Night to Remember" fame) was put in charge of the movie, but it would be the introduction of one of the studios' most iconic actresses, the gorgeous Ingrid Pitt, what would turn the film into a cult classic. This free adaptation of Sheridan Le Fanu's classic Gothic novel "Carmilla", is rightfully, one of the best Hammer films, not only of their late period, but of all time.

In 19th century Styria, a remote region in Austria, a series of deaths amongst the villagers brings back the ancient rumors of vampires, specially when Laura (Pippa Steel), the niece of General Von Spielsdorf (Peter Cushing), falls sick to the same strange disease that it's killing the villagers. Marcilla (Ingrid Pitt), the daughter of a Countess, is living with the General's family as a house guest, after General Von Spielsdorf agreed to have her under his care while her mother is away. Laura quickly befriends Marcilla, who does everything she can to comfort young Laura. Sadly, all is in vain and the beautiful young girl dies. The mysterious Marcilla, vanishes from the General's home without leaving a trace. Several weeks later, the disease returns to the region, this time affecting Emma Morton (Madeline Smith), the daughter of a British nobleman (George Cole) who doesn't believe in vampires. However, Emma has a friend that looks after her, a young woman named Carmilla, that bears more than a passing resemblance to the disappeared Marcilla. Death has arrived to the Morton's house.

While scriptwriters Harry Fine, Tudor Gates and Michael Style do take some liberties with "Carmilla"'s plot, "The Vampire Lovers" is actually one of the most faithful adaptations to Le Fanu's novel, in the sense that it remains true to the novel's spirit and its balance of sheer Gothic horror and classy eroticism. The plot is quite well developed and there's an interesting attempt at building up a new mythology separated from Hammer's Dracula films. Also, the story plays nicely with suspense remarkable, as even when the story is told from the point of view of the "antagonist", the tension (both sexual and non-sexual) is always at the upfront. Keeping a balance between horror and eroticism is hard, but "The Vampire Lovers" manages to make a vivid portrait of those important aspects in the nature of the vampire myth. Carmilla is a temptress and a predator, a wild force of nature that, true to the vampire iconography, represents chaos and wilderness. What's interesting is how despite the outcome of the fight between the vampire and the civilized men, the vampire is always treated as the most charismathic figure.

The experienced Roy Ward Baker (who had already done a film for Hammer, "Quatermass and the Pit" in 1967) brought to Hammer Film Productions his extraordinary ability to do wonders with limited resources, a trait that suited like a glove the lavish look of the low budget horror films that made Hammer famous. What director Roy Ward Baker gives to the film is certainly class, a certain subtlety and elegance in his use of the camera that work wonders for the eroticism inherent in the story. While this subtle approach may seem restrained, it actually enhances the eroticism of several scenes, as what's implied is often more tempting than what is shown (and it's shown a lot). Despite the low-budget, the movie looks very good, as Roy Ward Baker makes an excellent use of his resources allowing him to create nightmarish scenes despite the budget constrains. An instrumental figure in this is cinematographer Moray Grant, who employs his talents to give the film a haunting atmosphere of dark fantasy that fits nicely with the Gothic tone of the story. "The Vampire Lovers" is one of the best looking horrors from the Hammer house.

It's more than clear that "The Vampire Lovers" is basically a star vehicle for the beautiful Ingrid Pitt, and she truly makes the most of the chance. As the lead character, Carmilla, Pitt is simply breathtaking, and not only because of her imposing beauty. Pitt manages to create a character that's both seductive and terrifying, alluring and destructive, the very essence of the horror tale. With her powerful screen presence, Ingrid Pitt carries the film with ease and creates an iconic figure in the process. And her strong personality makes a pretty good contrast with the innocence portrayed by actress Madeline Smith as Emma Morton, her counterpart in several scenes. Smith makes a fine job in her role, but her character is sadly a tad underdeveloped and ends up as just another damsel in distress (the real star is Carmilla of course). Kate O'Mara delivers another of the great performances of the movie as Mme. Perrodot, a governess infatuated by Carmilla's power. George Cole, Douglas Wilmer and the legendary Peter Cushing complete the cast, bringing excellent support due to their experience and great talent.

The 70s would prove to be a difficult time for Hammer Film Productions, as in order to keep up with the times the company would begin to produce all sorts of variations to its horror films. Some would be set in modern times, while other would be bizarre combinations of genres ("The Legend of the 7 Golden Vampires", mix of Gothic horror and martial arts is a perfect example of this). Nevertheless, "The Vampire Lovers" is one of the forgotten gems of that period in Hammer history where experimentation was needed to survive. In the case of this film, the experiment worked, and two more films were done in this model, making what is now known as the "Karnstein Trilogy" (with the films "Lust for a Vampire" and "Twins of Evil"). Despite its problems, "The Vampire Lovers" can be considered amongst the best Hammer films, not only of the late period of the company, but of all its history.

Are you tired of being human, having talented brain turning to a vampire in a good posture in ten minutes, Do you want to have power and influence over others, To be charming and desirable, To have wealth, health, without delaying in a good human posture and becoming an immortal? If yes, these your chance. It's a world of vampire where life get easier,We have made so many persons vampires and have turned them rich, You will assured long life and prosperity, You shall be made to be very sensitive to mental alertness, Stronger and also very fast, You will not be restricted to walking at night only even at the very middle of broad day light you will be made to walk, This is an opportunity to have the human vampire virus to perform in a good posture. If you are interested contact us on Vampirelord7878@gmail.com