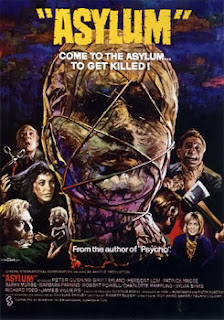 When talking about 70s British horror, the obvious reference is of course the classic gothic horror films produced by Hammer Film Productions during that decade. Nevertheless, Hammer Films and their monsters weren't the only horrors coming from the United Kingdom at the time. Inspired by the success of Hammer Films in the horror genre, Amicus Productions began to produce their own genre films in a similar visual style (in color, and often with the same cast), though with several obvious differences: while Hammer was making period gothic horror films, Amicus set its films in contemporary times, and instead of gothic horror the Amicus films were mostly anthologies, portmanteau horror films consisting of four or sometimes five short horror stories linked by a common theme or frame story (inspired by the British classic, "Dead of Night"). "Asylum", released in 1972 and directed by Roy Ward Baker (whom already had spent a time at Hammer, directing "The Vampire Lovers" in 1970 among others), is a perfect example of the kind of horror films that Amicus would be producing during the 1970s.

"Asylum" (also known in the U.S. as "House of Crazies"), takes its title from the fact that its framing tale is about a physician, Dr. Martin (Robert Powell), whom arrives to the asylum of the title for a job interview. Dr. Lionel Rutherford (Patrick Magee), the man who is conducting the interview, decides to put Martin to test: one of the inmates at the asylum is Dr. Starr, the former head of the Asylum who lost his mind after a complete mental breakdown. Dr. Martin will have to interview the inmates at the asylum and identify which one of them is actually Dr. Starr. If he manages to recognize him, Martin will get the job. So, Dr. Martin gets into the asylum, meeting each patient in their solitary confinement cells and listening to their tales. Patient Bonnie (Barbara Perkins) will tell a tale of ambition and voodoo, while tailor Bruno (Barry Morse) will reveal his bizarre experience with a quite special fabric. Barbara (Charlotte Rampling) will detail her cherished friendship with the mischievous Lucy (Britt Ekland), while Dr. Byron (Herbert Lom) will talk about a terrifying experiment with soul transference.

Writer Robert Bloch (author of the novel "Psycho", adapted to the screen in 1960) takes on the scriptwriter duty in "Asylum" taking as basis four of this short stories, to which he adds the asylum theme as framing story for the film. While the use of a framing story as bookend for the rest of the tales is a pretty common device in Amicus Productions' anthologies, the fact that Bloch uses the asylum motif gives the movie a quite particular identity of its own, as it allows the tales to move between the more realistic horror to the realm of pure fantasy with great ease, as after all, these are the stories of a group of mad people. Two major themes appear in each one of Robert Bloch's stories: the animation of inanimate objects, and the concept of identity and its deviations. This one ultimately echoes through the whole film, as the framing story involves Martin trying to discover whom amongst the inmates is actually Dr. Starr in disguise. however, this theme ends up a bit forced in the framing tale as it0s obvious that at least two of the interviewed inmates are too young to be seriously considered as candidates to be Dr. Starr.

By 1972, director Roy Ward Baker was already considered as one of the most experienced filmmakers in the United Kingdom, having directed classics as "Morning Departure" (1950) and "A Night to Remember" (1958). While working at Amicus Productions meant lower budgets, Baker already had the talent and experience to do more with less, and "Asylum" shows this at its best. If there's something inherent in anthology films is that, by their own nature, they have the tendency to be uneven in terms of the quality of the stories that conform them, and sadly, "Asylum" is no exception. However, director Roy Ward Baker manages to lessen this a tad by keeping an equal degree of quality and stylistic coherence through every story. While the tales may shift in tone, the visual style that Roy Ward Baker keeps through the whole film gives the movie an ominous atmosphere of uneasiness, of dark abnormality that benefits the film a lot. So, even if Robert Bloch's screenplay is no the strongest element in "Asylum", its impeccable manufacture certainly is.

Like most of the movies released by Amicus Productions, the cast is made up of a mixture of legendary stars of the horror genre (Peter Cushing and Herbert Lom), and young rising artists looking for the chance to shine (Britt Ekland and Charlotte Rampling). The result, as in every portmanteau film, varies from tale to tale, though in general the acting in "Asylum" is of great quality. On one hand there are haunting performances, as the ones by Mores and Cushing in "The Weird Tailor", in which both actors manage to capture perfectly the slightly hammy tone that a tale of dark supernatural fantasy like this one demanded. On the other side, Britt Ekland and Charlotte Rampling aren't as fortunate in their tale, which moves in the terrains of psychological horror. While the story where they work, "Lucy Comes to Stay", is perhaps the dullest of the four, a better work by the two actresses may had meant a significative improvement. Patrick Magee, who plays the sinister wheelchair-bounded Dr. Lionel Rutherford in the framing story, makes a terrific work as the authoritarian and devilish doctor.

Despite some rather mediocre performances, "Asylum" doesn't have its weak spot in the acting department, as the cast as a whole makes an effective job. The film's weakness is perhaps hidden deeper in the Robert Bloch's screenplay. As mentioned before, it's common in anthologies that some of the stories are less functional than the rest, and that's unfortunately the case in "Asylum", as while "The Weird Tailor", "Frozen Fear" and the framing story are brilliant and quite interesting, "Mannikins of Horror" and particularly "Lucy Comes to Stay" fail to reach that level. The case of "Lucy Comes to Stay" is specially interesting as its plot is some sort of variation of the one in "Psycho" (so it's not a strange territory for author Robert Bloch), though set in a more youthful atmosphere that doesn't match the solemn way the story is developed, making it feel a bit slow and dull in comparison to other stories from "Asylum". A similar case is the problem of "Mannikins of Horror", as it has a quite interesting premise that would had benefited from a less campy, and more serious and somber tone.

While of a budget considerable lower than the gothic horrors of Hammer Film Productions (and that's saying something), Amicus Productions' anthology films could be as interesting or more than some of its rivals' horror movies, and "Asylum" is perhaps the best proof of that. While it may not be the best work of writer Robert Bloch, the movie benefits enormously from the masterful way director Roy Ward Baker crafts the movie, as well as the classy work by cinematographer Deny N. Coop, who manage to return that mysterious and somber atmosphere of classic gothic horror to the very modern contemporary England. It's a perfectly done mix of the old and the new. Despite being lesser known than the movies from Hammer Film Productions, it's worth to discover the oeuvre of Amicus Productions, and "Asylum" is a great way to start.

Are you tired of being human, having talented brain turning to a vampire in a good posture in ten minutes, Do you want to have power and influence over others, To be charming and desirable, To have wealth, health, without delaying in a good human posture and becoming an immortal? If yes, these your chance. It's a world of vampire where life get easier,We have made so many persons vampires and have turned them rich, You will assured long life and prosperity, You shall be made to be very sensitive to mental alertness, Stronger and also very fast, You will not be restricted to walking at night only even at the very middle of broad day light you will be made to walk, This is an opportunity to have the human vampire virus to perform in a good posture. If you are interested contact us on Vampirelord7878@gmail.com